Mandeville, LA – Exclusive Transcript – What happens when the Affordable Care Act is 100 percent enforced?  We’re going to have all kinds of YouTube video exchanges with people accusing the government or accusing whoever the Health and Inhuman Disservices Department secretary is at the time?  How does it get to this?  How do we arrive at the station in civilization’s existence where we now turn to government, then when government doesn’t deliver, we are fully prepared to wage verbal war against it for not doing what it is supposed to do, which is to transfer lungs now.  Check out today’s transcript for the rest…

Mike:  Have you seen the story of the little girl who is awaiting a lung transplant?

Mike:  I was watching it this morning.  They were running footage of it on the Clinton News Network.  Apparently she needs a new set of lungs.  There is something with the Affordable Care Act that is allegedly preventing the little girl from getting a set of donor lungs.  It’s some kind of red tape.  I don’t have the story here in front of me because I ran out of time during show prep.  I’ll get all the details of it.  I do know and I did hear that a direct plea was made to Kathleen Sebelius, who is the head of the Health and Inhuman Disservices Department that administers the Affordable Care Act.

The mother was being interviewed, I guess it was over Skype or something like that, one of these online software programs that you can use to do live video chats.  She was crying and saying: I can’t believe they’re going to let my daughter die because there’s red tape.  They’re going to let this little girl expire because of the red tape involved in trying to get a lung transplant.  I just paused for a moment and thought to myself, first of all, many of you listening to this program right now are organ donors.  Are you an organ donor?  Did you check the box on your driver’s license when you went and signed up with the State of Maryland or wherever you got your license?

Mike:  So am I.  As I always joke and tell my friends, I hope somebody — if anything bad ever happens to me or if I am practically run over or whatever happens and my organs can become available to someone through a donor, although as I get older, I think the possibility of that becomes less and less likely, but should it happen, I apologize in advance to the harvesters that the liver is no longer usable.  If I could put that on the card, I would put it on the card.  You can have everything except you don’t want the liver.  Trust me, just leave the liver…

You think about this now.  Child has a defective or not correctly developed pair of lungs and is going to expire if she cannot find a replacement set of lungs.  When you think about that, when you’re replacing lungs, that is the organ, that is a massive, massive transplant to undergo.  I don’t have any personal experience with this other than knowing that it is possible.  When you think about the magnitude of technology and our medical smarts of being able to replace a pair of lungs, you’d have to hear the mother’s plea to grasp the enormity of it.  Here in 2013, in these United States of America — I don’t want to say it’s a sense of entitlement, because I didn’t get that she felt she was entitled.  I did get that, [mocking] “The federal government has access to lungs and they won’t give me a pair.  I want a pair of lungs for my kid and Sebelius and Obama are standing in between us.”

So a secretary of a government agency is presiding over the life or death of the girl, the child.  In order to get the transplant, you have to have a donor.  Someone has to become metaphysically challenged in order to provide the lung.  Then apparently there is some sort of process where the organs are divvied up.  You have to have tissue matches and blood matches.  You people who do this, you know far more about this than I do.  I’m just struck by the magnitude of the outrage being expressed by the mother over the government is not doing enough, Obama and Sebelius are not doing enough to provide her daughter with the lungs.

What happens when the Affordable Care Act is 100 percent enforced?  We’re going to have all kinds of YouTube video exchanges with people accusing the government or accusing whoever the Health and Inhuman Disservices Department secretary is at the time?  [mocking] “You denied my kid a kidney!  All she needed was a kidney!  The government killed her!”  How does it get to this?  How do we arrive at the station in civilization’s existence where we now turn to government, then when government doesn’t deliver, we are fully prepared to wage verbal war against it for not doing what it is supposed to do, which is to transfer lungs now.

Now our government formed under the Constitution of the United States is now responsible and now must micromanage organ transplants.  How many people thought about that at the time of the Affordable Care Act’s passage?  What will this mean for the organ transplant industry?  If you were to call something like that an industry, that would open up all kinds of opportunities for science fiction-type abuses and monstrosities being executed or monstrous plans being executed against the people.  Ordinarily when a child is involved, I would be moved by the story.  What caught my attention was that a secretary of a government agency was bearing the brunt of denying medical services.

This is going to happen with greater frequency when more people are forced by their employers dropping health insurance coverages, and since we don’t really have a free market to go out and buy your own insurance any longer — I suppose that you can, but it’s not really based on any market constraints.  The instances of this are going to pick up.  They’re not going to go down; they’re going to increase.  You’re going to have more outrage and I would imagine more instances and occurrences of children, or adults for that matter, being denied organs.  There’s just something not right about that.  Who would even want to be in the position of writing the rule of how you divvy up the spoils of harvested human organs?

Mike Church Show Transcript: Dr. Eric Helps Us Unravel The Web That Is Medicare And Medicaid

I can’t imagine sitting in a room — how many of you listening right now are going, [mocking] “Okay, Mike, what’s the point?  Get to the point.  Get back to bashing Obama.”  No, seriously, think about that for a moment.  Is there anyone listening at this moment who would want to be part of the rules committee that would be charged with the task of writing the rule book, the handbook for who gets organs under the Affordable Care Act and how?  I don’t know how you could show up for work every day and do that.  [mocking] “What do you do for a living?” — “I decide who lives and who dies.  I’m God.” 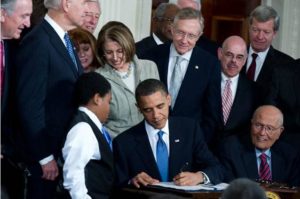