Folks, this is why it’s called ratified intent.  It doesn’t matter what today’s nitwits want the law to say.  What matters is what did the ratifiers say they were ratifying?  If you don’t like that, fine, ratify your own law.  It’s pretty simple to fix.  If you want the 14th Amendment to mean what you think it means, fine.  Propose one in that precise language, abolish the first ten amendments as prohibitions against the State or against the federal leviathan, our national hegemony, and do so by affirmative action.  Check out today’s transcript for the rest…

Begin Mike Church Show Transcript Mike:  We will not even get into the argument that the 14th Amendment was never legally ratified.  It wasn’t.

This expansive reading of the XIV Amendment has been with us for a while. In 1996, the 14th Amendment argument was used to force Virginia to admit women into the Virginia Military Institute. Never mind that VMI had existed in 1868 and nobody in Washington at that time rushed down to Lexington and ordered the Institute to admit women. Now, 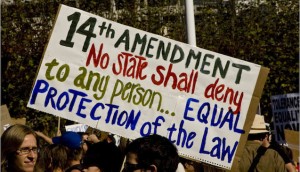 however, after almost 120 years, we are to believe that gender segregation at VMI is inconsistent with the XIV Amendment. No law can have legitimate meaning beyond the intentions or understanding of the law-givers.

Mike:  Folks, this is why it’s called ratified intent.  It doesn’t matter what today’s nitwits want the law to say.  What matters is what did the ratifiers say they were ratifying?  If you don’t like that, fine, ratify your own law.  It’s pretty simple to fix.  If you want the 14th Amendment to mean what you think it means, fine.  Propose one in that precise language, abolish the first ten amendments as prohibitions against the State or against the federal leviathan, our national hegemony, and do so by affirmative action.  Amendment 28, altering Amendment 14 and meaning what you people want it to mean.  Abortion, gay marriage, you name it, it’s all in the 14th Amendment, forced busing, segregation, all of it is in the 14th Amendment.   As I said, anything you could want to do with man, woman or beast.  Maybe that’s what the amendment should say: There is nothing on Earth that an American citizen could desire with man, woman or beast that is not made legal and protected by the Constitution in Amendment 14, says Amendment 28.  Back to D.J. White:

[reading] No law can have legitimate meaning beyond the intentions or understanding of the law-givers. No lawmakers in 1868 believed they were ending gender-segregated military education, but somehow this meaning has been poured into the XIV Amendment by unelected, irresponsible judges in 1996. [Mike: You’re right, Mr. White, and that’s why those judges should have been impeached.] Whether women should be admitted to VMI or not was a separate question. Whether a Federal judge was empowered to order this is the question at hand. The case is especially troubling, however, from the perspective of nomocracy (rule of law).  The Virginia Attorney General’s oath of office reads as follows: “I do solemnly swear that I will support the Constitution of the United States and the Constitution of the Commonwealth of Virginia, and that I will faithfully and impartially discharge all the duties incumbent upon me as Attorney General of the Commonwealth of Virginia, according to the best of my abilities, so help me God.”

Mike:  When I read the oath of office for the attorney general for the State of Virginia, it sounds to me like his first line of duty is to the U.S. Constitution.  We delegated some of our sovereign authority or enumerated some powers for them to carry out.  At the end of the day, that’s the extent of it.  All the rest of those powers that are exercised by this state and by this legislature and by our governor and by our counties and everything else flows from the Virginia Constitution of 1832 and whatever amendments have been attached to it after that.  His duty then is principally, because he has no authority in enforcing federal edicts, other than to see to it that if the state is contravening in a power that they enumerated to the federal government and the federal government wishes to exercise it, it would then be his job to say to his colleagues in Virginia: You guys are out of order.  If you do not stop, I, under the laws of Virginia, since we ratified the Constitution and agreed to be bound by it, I will have to prosecute you and try to bring this dishonor or ignorance of an enumerated power that you are trying to exercise that belongs to our federal union.  Mr. White writes:

It is interesting to consider what a citizen or officeholder should do if something in these two constitutions were to be inevitably contradictory. Say, for example, if Virginia had adopted a constitutional amendment making Virginia a hereditary kingdom. This would clearly violate Article I, Section 9 and Article IV, Section 4 of the US Constitution. Or would it? The latter (Virginia) amendment would have priority of place over the earlier. As far as the other states were concerned, they would still have their prohibitions against royalty and aristocracy in place. At the founding of the republic, the Founders were deeply suspicious of royalty and aristocracy and prohibited them in the new republic. Royalty and aristocracy were prohibited, however, not by the Federal government, but by the sovereigns, the peoples of the several states, through the adoption of the Constitution of the United States, including Article I, Section 9 and Article IV, Section 4. This point is vital in understanding our system of government. In this hypothetical case, the people of the other states could, and should, tell Kingdom of Virginia, “We have prohibited royalty and aristocracy in our republic. We ask you to rescind this decision, or withdraw from the Union.” In this way, the sovereigns of Virginia could keep their sovereignty and the peoples of the others states keep theirs. Additionally, it would not be the agent, the Federal government, disassociating itself from the people of the Virginia (it has no power to do so), it would be the principals, the sovereign peoples of the several states.

Mike:  This is just brilliant.  I like this argument.  If you want to get out of the union and you don’t want to secede, all you have to do then is hold a convention and say, [mocking] “We’re out of this constitution business.  We’re gonna have one, but we’re gonna have a king, and we’re gonna have a queen.  Yeah, Mitter Church, we’re gonna have ‘em all.  We’re gonna have dukes and jesters and duchesses.”  Just wait for surrounding states and Eric Holder to go, “You can’t do that!”  “Why?”  “Because Article I, Section 9, Article IV, Section 4, you can’t do that.”  “What happens if we do do it, huh?”  “Well, we’re gonna have to ask you to stop.”  “Okay, what if we won’t stop?”  “We’re gonna vote you off the island. We’re gonna ask you to leave our union.”  “No, please not that!”  All the while thinking: Yes!  We may have solved two problems. By the way, the vote in 2006 on the gay marriage ban was 53-47, and that majority made that amendment part of the Virginia Constitution.  The Attorney General in Virginia should relent, and if not, then, as I said, if there’s an impeachment clause — I don’t have the Virginia Constitution here in front of me — it ought to be used.  Jeremy in Virginia is next on the Mike Church Show.  Hello, Jeremy, how you doing?

Caller Jeremy:  Good, Mike, how about yourself?

Caller Jeremy:  About the Virginia Constitution, the whole AG thing here, Article IV, Section 17 does state that the Governor, Lieutenant Governor, Attorney General and others may be impeached by malfeasance of office, corruption, neglect of duty, and/or other high crimes and misdemeanor.  So, yes, there is a clause there.  Just to go off of that, Mark Herring, on his Twitter account, he said, “A state law and a state constitution cannot violate the United States Constitution. and I swore a duty to uphold both.”  I’d like to hear what you have to say about his little quote there, but I also let you know that yes, there is in fact an impeachment clause in our constitution.

Mike:  Well, you’re not violating a part of the U.S. Constitution.  There’s not a damn thing in the U.S. Constitution about any act of marriage.  There’s nothing in the 14th Amendment on it either.  There has been no case that has been universally decided by the Supremes yet that says it would be violated.  So is he making his own Supreme Court decision, just thinking in the future, prophesizing that that is going to be the court’s decision, so he is now going to enforce it in the hopes that that’s what happens?  What else has he said?

Caller Jeremy:  That’s basically what’s on there.  I just think what he’s doing is campaigning for governor already.  It’s going to be the cookie-cutter approach to it worked for McAuliffe.  He’s going to basically go on his coattails and try to ride right into the office.

Mike:  Of course, he’d have a little bit of time that he’d have to wait.  Back to the clause at hand here, as D.J. White points out here, the Virginia Constitution is also his to enforce.  As I just pointed out, it is not contravening an enumerated power of any act of the federal legislature that I’m aware of.  As a matter of fact, we actually have an act that the Obama administration is refusing to enforce, and the Supreme Court is now getting wishy-washy about enforcing, which is the DOMA Act, Defense of Marriage Act, which was passed in 1996.  If anything, he ought to be enforcing, and so should the other states that have similar measures on their ballots and have voted on it, since you have an amendment to your constitution, he ought to be enforcing the DOMA Act.  It’s just as much incumbent on him to enforce that legitimate act of Congress as it is some illegitimate act of a yet-to-be-convened tribunal of the Supreme Court, is it not?