Mandeville, LA – Exclusive Transcript – I have this discussion here in the United States Senate.  For those of you that do not believe or have been told or instructed by other radio or television shows or blogs that the United States Senate has a card to play in the Affordable Care Act and the funding of it, you have been misled.  Check out today’s transcript for the rest…

Mike:  I have this discussion here in the United States Senate.  For those of you that do not believe or have been told or instructed by other radio or television shows or blogs that the United States Senate has a card to play in the Affordable Care Act and the funding of it, you have been misled.  We know this, number one, because the Constitution says you’ve been misled, and number two, because throughout the history of the United States this has come up and it has always been settled the same way, which is that the House ultimately wins out.  If the House of Representin’ does not fund something, then it does not get funded and it does not or should not happen, end of story.  I take you to the United States Senate floor, Saturday, February 23, 1833.  If you go to the Congressional Globe, you’ll find this: “The Tariff—Reduction of Duties—Compromise Bill.”

The Senate resumed the consideration of the bill to modify the tariff laws; the question being on the motion of Mr. Smith, to change the second section so as to permit the duties on plains, kerseys, and Kendal cottons, costing under thirty-five cents per square yard, to be imported at five per cent, as fixed by the act of 1832, instead of increasing the duties on those manufactures to fifty per cent, as was proposed by the bill.

Mr. Wright supported the amendment. The great and leading objects for which this measure had been supported was to diminish the burdens of the South, and reduce the revenue.

Mike:  Then they had a debate with Mr. Wright, Mr. Foot, Mr. Clay, Mr. Forsyth, Mr. Buckner “advocated the interests of the West,” Mr. Bell “opposed the amendment.  The passage of the bill depended upon it.  If it was adopted, he should feel compelled to vote against the bill.”  The he gave some reasons why.  Then we go back to Mr. Wright:

Mr. Wright had heard nothing in support of this provision of the bill, which proposed to increase the duties from five to fifty per cent, which had convinced him that it was conciliatory to the South, or effectual as a means of reducing the revenue. Upon the principles on which the bill had been placed, it certainly would be improved by striking out this provision.

Mr. Chambers said it was impossible for him to vote for the bill, as a measure originating in the Senate, while it contained this provision for increasing the duties. By the constitution, the Senate could originate no such measure. If this feature were struck out, he should most cheerfully support the bill.

Mr. Benton requested that Mr. Calhoun, who had temporarily left his seat, might be sent for.

Mr. Benton did not. He only wanted the benefit of his testimony.

Mr. Calhoun having taken his seat,

Mr. Benton stated, that some years past he had introduced a bill which provided for a reduction of duties to a large extent, but increased the rate of duty upon some particular articles. It had then been decided by the presiding officer of the Senate, that, being a bill to raise revenue, it could not constitutionally originate in the Senate.  He asked for the benefit of the testimony of the gentleman who then presided over the deliberations of the Senate, to bear him out in the correctness of his statement.

Mr. Foot recollected the case, and was confident that only a question of order was raised, and the constitutional question was not decided by the Chair.

Mr. Benton then explained the provisions of the bill to which he referred, and compared them with the present. He regarded them as standing on the same ground. The question of order, if it was to be so called, was decided against that bill, upon the constitutional objection that it was not competent to introduce such a measure into the Senate. [Mike: Are you people getting this? Are you getting this out there? Hello? Mike to audience, come in audience. Just making sure everybody is on the same page here.]

Mike Church Show Transcript – Obamacare Funding Is Up To The House, NOT The Senate

Mr. Foot said the bill referred to proposed the commencement of a revenue system, which had not before existed, and clearly came within the constitutional objection.

Mike:  I can read the rest of this day’s debate.  It all says the same thing, that they couldn’t even amend a bill and add a nickel of revenue to it in the Senate.  They can’t do it.  Harry Reid cannot amend the damn bill that came out of the House and add any revenue that must originate in it.  He can’t.  The parliamentarian of the Senate should object.  I know that there is one there.  This is a key point.  Even if cloture is obtained today, if Harry Reid or any member of that body tries to offer to reinsert the funding for the Affordable Care Act, which does have a revenue component, has several revenue components in it, it should be defeated immediately by the parliamentarian or a vigorous debate should ensue in which it is brought up that the United States Senate cannot originate a bill, it cannot, to fund anything, to raise a nickel of revenue.  It can only happen in the House.  Folks, this is as open and closed, shut the door, katy-bar it, put the nail in the coffin, game over.

What we should be hearing right about now from Harry Reid and company is we should be hearing them bemoaning this and saying: That’s not the way we want it, man.  It can’t happen that way.  That’s the way it must happen.  If the Constitution matters, then that’s the way the Constitution says it has to happen.  We should hear the senators that want this to happen, led by the actor Bill Paxton saying something to this effect: “That’s it, man.  Game over, man, game over.  What are we gonna do now?  What are we gonna do!?”  You’re going to do nothing.  You’re not going to do anything, Billy.

Mr. Frelinghuysen regarded the constitutional difficulty as altogether insuperable. Having taken a solemn oath to support the constitution, he could not, however agreeable to his wishes, give his assent to a measure originating in the Senate . . .

Mike:  I’m just reading from the rest of the day’s debate.  If any of you say I’m cherry-picking this, I’m not cherry-picking it.  Every senator to a man held his honor and said: No, we took an oath.  We can’t do it.  Gentlemen, we cannot do it.  Where is that honor and that statesmanship to be found in that unbelievably formally august but now corrupt body known as the United States Senate?  This should not occur today but it will, it will.  It is a violation then of the constitutional order. 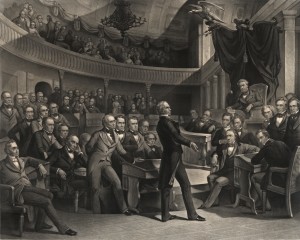