Mandeville, LA – Exclusive Transcript – We know that they built this massive new plant out there in the middle of the Utah hinterlands, away from anyone who would dare to want to go and see what the hell is going on in there.  You look at this place with an aerial photograph and it looks like something out of a movie.  You look at this thing and you go: There’s no way that can be that big!  What are they doing there?  Check out today’s transcript for the rest…

Mike:  Let me get back to Dan in Virginia who has brought up the 2,776 incidents of the NSA breaking or violating its own code of conduct or its own rules.  You were going to say what about that, Dan?

Caller Dan:  They mention that the 2,776 incidents covered a long span of time, I think it was four years, 2008 to present.  You would think that sounds like not a whole lot, less than 3,000 over a four-year period.  It was a rather long article.  They kept going on about incidents this and incidents that.  I’m asking myself: What in the heck is an incident?  If you weren’t sticking with the article or if you just decided there’s nothing here citizen, move on, and didn’t read the last paragraph, you might not be aware of the fact that one incident could be perhaps spying on 3,000 individuals.  Now you’re thinking that’s 3,000 times almost 3,000 intrusions into the privacy of the average American.  That’s just bordering on outrageous.

Mike:  Just the sheer numbers of it are daunting to consider, especially when you consider that we know, the admission has already been made, that 110 million Verizon Wireless customers had metadata, as they call it, collected and stored by NSA servers and what have you.  We know that they built this massive new plant out there in the middle of the Utah hinterlands, away from anyone who would dare to want to go and see what the hell is going on in there.  You look at this place with an aerial photograph and it looks like something out of a movie.  You look at this thing and you go: There’s no way that can be that big!  What are they doing there?  Well, they have supercomputers there.  They have cooling towers there.  They pump liquid nitrogen around in there to cool the computers off that are busy hacking into the everyday lives of average American citizens out there, which is not supposed to be what the war against terror, I must have missed the part where it was to be waged against the citizenry.

Caller Dan:  They could probably fit five Pentagons inside that huge building.  They would have had to have gotten the approval of both houses of Congress to appropriate the money to build that huge monstrosity, wouldn’t they?

Mike Church Show Transcript – Will The NSA And Big Government Stop At Nothing To Hide The True Scope Of Their Tyranny?

Mike:  You would think they would have.  As I have been informed by others: Mike, the NSA, CIA, they’ve got black box funding.  They don’t have to tell anyone anything.  It’s off the record, off the books.  It’s not traceable.  That is a problem for Congress to troubleshoot, it would seem to me.

Caller Dan:  It’s still my tax money and your tax money that goes to build that huge monstrosity.

Mike:  It’s not only that.  We’re told you can’t even find out what the CIA has been funded because there’s no paper trail for it, the money goes to the executive branch and they say: We’re going to pay this and pay that.  Again, I just can’t help but return to the same point I return to over and over again.  The executive branch executes the laws that are written by the Congress.  Appropriations are laws.  An appropriation is nothing more than a legal document that says that some of the revenue that has been collected by the federal government will be applied towards [insert description here.]  That directs the executive to apply that funding to whatever the case may be.  If the Congress is foolish enough to give basic block grants to the executive, they say: Here’s $210 billion.  You guys figure out how to spend it.  They’ve asked for it.  My understanding is that that is not occurring at least publicly.  The whole purpose of having the appropriations in the House of Representin’ and any taxes have to originate in the House of Representin’ is to make sure that when Congress does things that are not acceptable or incur the disapprobation of the public, that there is a mechanism to deal with it.

Mike:  Yeah, they’re doing a great job.  The check is supposed to be that there is a check at the ballot box.  You just don’t return that member of Congress back to the ballot box.  You bring up 2,776 incidents of the NSA violating its own laws and procedures.  This is chump change here.  These are the incidents where they are admitting they’ve done it.  What about the thousands upon thousands or even millions of incidents where they have received the sanction of the FISA court and have done it?  As Ron Paul points out why the 2,776 NSA violations are no big deal.

Thanks to more documents leaked by Edward Snowden, this time to the Washington Post, we learned last week that a secret May 2012 internal audit by the National Security Agency revealed 2,776 incidents of “unauthorized” collection of information on American citizens over the previous twelve months. They are routinely breaking their own rules and covering it up.

The Post article quotes an NSA spokesman assuring the paper that the NSA attempts to identify such problems “at the earliest possible moment.” [Mike: What do you mean identify such problems? How in the hell does this stuff get started?] But what happened to all those communications intercepted improperly in the meantime? The answer is, they were logged and stored anyway.

We also learned that the NSA routinely intercepts information from Americans while actually targeting foreigners, and that this is not even considered a violation. These intercepts were not deleted once discovered, even though they violate the government’s own standards. As the article reports, “once added to its databases, absent other restrictions, the communications of Americans may be searched freely.” [Mike: Again, nothing to see here, citizen, move along.]

Mike Church Show Transcript – Ron Paul Points Out What Should Be Obvious: Politicians Lie And The NSA Spies

So although the numbers of Americans who have had their information intercepted in violation of NSA’s own rules seems large, it is actually miniscule compared to the huge volume of our communications they intercept in total!

Though it made for a sensational headline, the fact is these 2,776 “violations” over the course of one year are completely irrelevant. The millions and millions of “authorized” intercepts of our communications are all illegal – except for the very few carried out in pursuit of a validly-issued search warrant in accordance with the Fourth Amendment. That is the real story. Drawing our attention to the violations unfortunately sends the message that the “authorized” spying on us is nothing to be concerned about. [Mike: Again, nothing to see here, you hoi polloi peasant, move along.]

When information about the massive NSA domestic spying program began leaking earlier in the summer, Deputy Attorney General James Cole assured us of the many levels of safeguards to prevent the unauthorized collection, storage, and distribution of our communications. He promised to explain the NSA’s record “in as transparent a way as we possibly can.”

Yet two months later we only discover from more leaked documents the thousands of times communications were intercepted in violation of their own standards! It is hardly reassuring, therefore, when they promise us they will be more forthcoming in the future. No one believes them because they have lied and covered up continuously. The only time any light at all is shone on these criminal acts by the government is when a whistleblower comes forth with new and even more disturbing information. 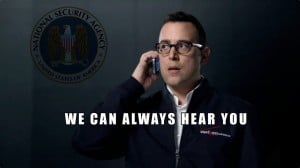