Mike:  I want to give you an example that you can sink your teeth into and that has something to do with the campaign right now.  Mr. Gruss, what was President Obama out in California yesterday jumping up and down, screaming and hollering about?

Mike:  In Las Vegas yesterday jumping up and down, hollering and screaming.

Mike:  That’s right.  And, of course, what’s the problem with education?  There’s not enough what?  Money.  [mocking Obama] “Listen to me.  Romney and his buddy Paul Ryan are gonna fire every teacher in the land.  I tried to hire more teachers.  They told me know.  There are no more teachers.  They’re gonna put 100, 200, 350 kids in a class.  They gutted education.”  Gutted education?  Are you kidding me?  How do you get away with saying this with a straight face?  The budget for the Department of Education has tripled in the last decade, not doubled, tripled.  Gutted it?  Who?  Where?

Of course, we’re not actually going to measure these things.  We wouldn’t want to actually present any facts of the matter here, no, no.  We don’t want to do that here.  Then we’re told by their class size.  We wring our hands over class size.  How can a teacher possibly do anything when there’s a class of 30?  Well, I would suggest to you that if all 30 of the young minds in the class are hungry to learn, her job is probably pretty easy, because the young, hungry-to-learn educated at about the same level are going to have very similar questions.  Let’s listen to the president yesterday.

Of course, attached to the Department of Education are what?  There are education think tanks out there, those people I was talking about earlier.  We’ll have all manner of people that will show up at forums on how to get our education right.  Is this really a mystery?  Are you freaking kidding me?  Are we that stupid as a people?  That’s why I have to laugh at people when they call me and say, [mocking] “We got to get our education system in this country straight.”  Do we need a blueprint on how to make a wheel?  What do you mean we need to get our education system straight?  They act as though there’s some mystery here, that all of a sudden in 2012 in our enlightened and evolved status we forgot how to learn, forgot how to teach.  How in the world did we forget how to teach people?  Maybe, maybe, maybe we forgot whose responsibility it was to teach people.  Listen to Obama droning on about this most sacred of all sacred cows yesterday.

President Obama: When a teacher in West Philadelphia, somebody on the frontlines of our education system told Governor Romney that having too many kids in his class made it harder for him to do his job, Governor Romney told him that class size don’t matter.  There are a lot of studies that say that class sizes do matter, especially in the early grades.

Mike:  Stop the digital media file right there.  That’s what I wanted right there.  What did he just say?  There are lots of studies.  Who did the studies?  He’s talking about studies that were done about class size.  Who did them?  Who paid for them?  Who worked for those people?  Who worked for that entity that studied class size?  Do you want to answer that question?  I’ll answer it for you: your elite, aristocratic, almighty federal overlord and non-profit sector bureaucrats.  That’s who did it.  Of course, they were paid either by the State of Louisiana or State of Nevada, State of California, or the general government.  Usually, though, the matriculation of funds begins at the top of the corporate welfare chain and then trickles down.  We have people out there studying education.

What is it, about 4,000 years ago, maybe 3,000 years ago we had this cat roaming the Athenian countryside named Aristotle.  A little later we had this cat named Socrates roaming the countryside.  We had these people that basically created this whole education thing, this need for education 3,000 years ago.  Here we are in 2012 and there are entire civilizations that are so deluded and so out of touch with the history of their own species — we’re not even talking about the history of the country, the history of the freaking species.  We actually think we have to employ vast armies of people to study how to learn?  What the hell is going on here?  This is why your little budget deficit problem that we’re going to talk about in a minute, why it’s never going to be fixed.  There are actually nitwits roaming the countryside out there brain-dead citizens as though there is some shrouded mystery here.  Pick the digital media file up.  I heard it earlier.  I knew that he said studies in there.  Let’s roll the rest of the culmination of 3,000 years of recorded history and education.

President Obama: . . . that class size don’t matter.  There are a lot of studies that say that class sizes do matter, especially in the early grades, but more importantly, why wouldn’t we be listening to the teachers that are actually in the classroom?  The way he talks about them, it seems as if he thinks these are a bunch of nameless government bureaucrats that we need to cut back on, those are his words.  His economic plan certainly would do that.  The plan Governor Romney has put forward would cut America’s investment in education by nearly 20 percent.  A part of the jobs bill that I sent to Congress last September would have helped states like Nevada prevent further layoffs, would allow them to rehire teachers who lost their jobs.  Republicans in Congress [crowd boos] — no, no, don’t boo, vote.  We all understand, there’s nothing more important to our country’s future than the education we give our children.

Mike:  This is all a horrible dream.  “Don’t boo, vote.”  So now the greatest expression the American person can make is to vote.  It’s not what you do in the two years or four years in between voting, it’s just vote.  [mocking Obama] “Don’t get mad, vote.  Vote for somebody to pay for your kids to go to school.”  Education is just one of these things.  How is it that the problem gets worse every year?  How is it that if you look at a chart or graph of SAT or ACT scores, or comparative graphs of ACT and SAT scores and maths and sciences and compare them to children learning in communist countries like China or non-communist countries maybe like South Korea.  Here’s an even better one, one of those evil social welfare states, say the Netherlands.  Compare our young nitwittery’s educational progress with theirs, why are their lines going up and ours going down?  It is undeniable that we spend more money than they do.  We spend more money per pupil than almost the entire planet.  I think there are two countries on Earth that spend more money per pupil than the United States.  One of those that spends more spends more because they are just building their educational infrastructure.

You know what I want to know more about?  I want to know more about who it was that did the study on the class size.  Whose idea was it to study that?  Did they ask any of us?  Was I consulted on whether or not I wanted to be taxed, on whether or not the first hour of this show that I just performed admirably on behalf of this audience that should be asking similar questions, that the wages I just earned are going to be taken from me to go pay the person to do the study that’s going to study the thing that’s been around for 3,000 years?  We’re going to perfect I, aren’t we? 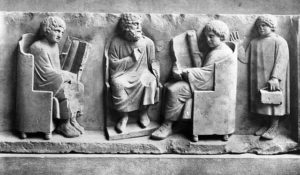 0Shares
department of educationNewt GingrichObamaPaul Ryanromney
Previous PostWe Are Burning Our Traditions and Great WorksNext PostIT’S OFFICIAL: Hurricane Ron Will Not Amount To a Summer Breeze At The RNC