Mandeville, LA – Exclusive Transcript – The communism question is a more, I think, intriguing and interesting interregnum.  I don’t think people should be running around calling other people communists.  However, there is a despicable trail of dead people, of bodies that the communists of the 20th century left for us to view and left as a warning as to why you shouldn’t practice communism.  Let’s go through this for just a moment.  Some of you aren’t going to like what I’m about to say.  Check out today’s transcript for the rest…

Mike:  Next up is Neil in Louisiana.  How you doing?

Caller Neil:  I’d like to see you run for governor here in Louisiana

Mike:  Yeah, that’ll happen.  I’d last about eight seconds.  As soon as I announce, the Times-Picayune would find out that I have uttered publicly the word secession, and that would be all my campaign would be about, which is fine.  I’d be happy to engage anyone in the discussion or the debate, but it would detract from, I think, any discussion of the real issues, like the one I just discussed about our rotten constitution of 1974.

Caller Neil:  Yes, sir.  I have a three-part question, if I may.

Caller Neil:  I’m 51.  When I was a kid, communism and socialism had a negative connotation.  We’ve allowed them to put the word progressive on that philosophy.  It almost sounds enlightened.  When will we call them out for what they are?  My second part of my question is, based on [unintelligible] in Virginia, do you think the Republicans will realize legalizing 20 million foreign nationals is not a good idea?  Thirdly, I read your book on Jeff Davis.  It didn’t go through his farewell address to the U.S. Senate, and I find that to be one of the finest speeches in American history.

Mike:  Bledsoe didn’t include that in the book, so we didn’t include it in our edition of Bledsoe’s book.  I suppose it could be in the appendix in a future edition.  The first statement about progressivism being the same as socialist and communist, socialism is State control of the means of production.  That’s how I classically define it.  Venezuela practices socialism, which is why oil companies don’t go there anymore, because they know if they erect infrastructure and they get into the exploration and then the refinement of oil, the State of Venezuela is going to claim: We don’t like the way this is working out.  We’re just going to confiscate your little refinery there.  You can still kind of work at it, but we own it now, buddy.  That’s owned by Venezuela.  That has not happened here.  Using that definition, that has not happened here yet.  It doesn’t mean they don’t want it to happen here.  Maxine Waters actually proposed this the last time the gasoline prices crossed five dollars a gallon.  It has not happened here yet.

The communism question is a more, I think, intriguing and interesting interregnum.  I don’t think people should be running around calling other people communists.  However, there is a despicable trail of dead people, of bodies that the communists of the 20th century left for us to view and left as a warning as to why you shouldn’t practice communism.  Let’s go through this for just a moment.  Some of you aren’t going to like what I’m about to say.  My advice to you is talk to the kids about the lessons they’re about to get today in Obama’s Department of Education’s public schools.

Between Stalin, Lenin, Khrushchev, Brezhnev, and the early parts of Gorbachev in the Soviet Union, estimates are that between 60 and 100 million Russians lost their lives, either through starvation or died while imprisoned, working in the gulags, or were just politically executed.  That happened too many millions of times.  Ditto the same occurrences in Mao’s China, in Castro’s Cuba, and in other places like where the Khmer Rouge was in southeast Asia.  Communism has a track record of dead bodies.  We tend to not assign or affix our own trail of dead bodies in the United States because we’re the freest, greatest country in the history of man.  If you really want to know the truth and if you really want to look at this honestly and forthrightly like adults, big boys and big girls, the truth of the matter is, since the atrocity committed under the name of the Constitution called Roe v. Wade, about 53 million Americans have been killed.

That is a trail of bodies that is almost equal, [mocking] “Mike, that’s not fair to say that.  They weren’t really born.”  Your definition, not mine.  That is a significant trail of death and can be assigned principally, yes, it is true, to one emergent political party, which is the Democrat Party.  But it’s not fair to say it’s just the Democrats because there are many pro-choice Republicans out there and independents.  So while the Democrats get all the blame for it, it’s Americans that ought to get the blame.  The fact that this particular death streak and this particular trail of bodies or heap of bodies continues to pile up and people are out there throwing major hissy fits and demanding that it continue, see the arguments in court over the latest attempt to try and stop this, this barbaric practice in the State of Texas.  There are people out there losing their minds, [mocking] “You can’t do that!  We have to have this!”  See what happened in California with allowing nurse practitioners to perform the barbaric, ghastly procedure.  This is what makes us worthy of calling ourselves free?  Are you freaking kidding me?

That has all happened as a result of the progressives.  At the early part of the century, they fancied themselves as philanthropists.  We should call them today what they were, which is either eugenicists or those practicing some form of genocide.  It’s still happening, and it happens with the sanction — you and I get to enjoy the fact that we get to pay for it because it’s heavily subsidized.  It is something that we will not escape.  Whether you like or agree with what I just said, those are the facts.  I might have even shorted the number of abortions.

We will not escape the magnifying glass that is history, ladies and gentlemen.  History is going to look back and is going to recognize all those people died in Russia.  All those people died in communist China.  All those Americans died before they could ever contribute and be part of these United States.  Is it fair to call progressives communists?  It depends on what your definition of communism is.  Like the communists, they have their own trail of death to deal with.  Should we allow them to try and paint, try to describe those who wish this atrocity to stop as being in the wrong, as being morally wrong?  What exactly are you supposed to do, clap for it?  Are you supposed to stand out there with a sign: I don’t agree with it but it’s your right?  If it’s your right, why don’t we just move the bar then?  Let’s get beyond first, second and third trimester.  How about 64th trimester abortions?  [mocking] “You’re not working out the way we wanted.  The State has determined.”  We do that, too.  It’s called the death penalty. 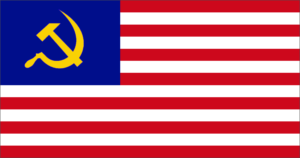 may I use this in the future? powerful callout to us as citizens of “these United States”