Mike:  We’ll start with Peter King on Fox News.  What is behind the rush, again, to frame or to prosecute — I’m being told my pronunciation is wanting on this, so let me work on my pronunciation — Dzhokhar Tsarnaev as an enemy combatant?  What different does it make under which statute he’s prosecuted under?  He did murder or assisted in the murder of the woman who is to be buried today.  He did murder or assist in the murder of that eight-year-old boy.  He did murder or assist in the murder of the other man.  You have ample ways to charge him under state statutes.  We must prove that we need the NDAA law.  [mocking] “If we didn’t have the NDAA, citizen, Dzhokhar would go free, citizen.”  Here’s Peter King saying this guy needs to be tried as an enemy combatant.  I just wonder what’s the motivation for this?  Maybe Mr. King will explain it to us.

Rep. Peter King: I believe he should be treated as an enemy combatant for the purpose of interrogation.  I put out a statement with Senator McCain, Senator Graham, Senator Ayotte.  The reason for it is, there’s so many questions unanswered.  There are so many potential links to terrorism here.  Also, the battlefield is now in the United States.  So, I believe he is an enemy combatant.  And he would not be tried before a military commission.  Ultimately, he will be tried in a civilian court, and the statements taken from him cannot be used against him in that trial.

Mike:  So the battlefield is now in the United States.  What we saw on Friday on the streets of Boston was a battlefield, which is why you saw military-style MRAPs vehicles and all the men that were manning them who looked like they were trained to do so.  Can you just imagine, AG — we don’t talk about this very often, and I only want to bring it up in the abstract.  If you think people that follow, the same people that think there are these railroad car FEMA camps out there – you know what I’m talking about, don’t you?

Mike:  Can you imagine what they must have been thinking as they watched all of that military hardware cavorting through the streets of Watertown and the other towns that were under lockdown on Friday?  Everything they have been talking about, all of it has now come true.  [mocking] “See, they do have — they’re armed.  They’re military.  They’re here.  They’re in our towns now.”  Here’s a member of the House of Representin’ saying the entire country is now a battlefield.  Really?  The entire country is a battlefield?  What if I don’t want to live in a warzone?

AG:  How they treated the situation since his arrest I find incredibly, not how they, but how Peter King and, as he laid out, Lindsey Graham, Kelly Ayotte and John McCain have wanted to treat this situation since the arrest I find incredibly troubling.  We can discuss immigration and whether or not people like the two suspects should be given political asylum and on the path to citizenship.  I think that’s a discussion we can have, and it sounds like that’s going to be part of the immigration debate going forward.  The fact is, Dzhokhar is an American citizen.  Not giving him Miranda rights because of this public safety exception, I think, is incredibly foolish and, I think, sets a really dangerous precedent.  In treating him as an enemy combatant, it seems as if you’re going to then allow the government to deem whoever they see as necessary —

AG:  — as an enemy combatant does that mean if you’re a gun owner and you made some statement but protecting your gun rights and your government doesn’t like that, are you then an enemy combatant?  I just think if you’re a conservative, limited-government constitutionalist, you can’t see what King, McCain, Graham and Ayotte want as anything positive going forward because it sets an incredibly dangerous precedent.

Mike:  Andrew, some of us warned when the NDAA was passed that this is exactly what would happen.  Some of us have been talking about it since they have been talking about doing this and making this part of the canon, part of the law.  Who gets to make the determination as to when someone is an enemy combatant?  It’s like Justice Potter Stewart once said, [mocking] “I can’t describe pornography, I say, I can’t describe it, son, but I know it when I see it.”  This is incredibly dangerous.  He’s right.  Now let’s declare the entire continental United States as a battleground.  There’s a war going on here in parts of southeastern Louisiana, I can vouch for that, and its rivaled gangs in the inner city of New Orleans fighting one another.  It’s those that have the stuff and those that don’t have the stuff — you can guess what the stuff is — shooting at one another because someone has more of it or less of it and someone else desires it.  That’s the only battleground or warzone that I’m aware of.  The battlefield is now in the United States?  Weren’t we told if we go spend a couple trillion dollars, sacrifice 5,000 or 6,000 of our bravest and youngest fighting wars overseas on the other guys’ territory, [mocking] “We have to fight them over there so we don’t have to fight them over here”?  How’s that working out for us now?  For heaven’s sake! 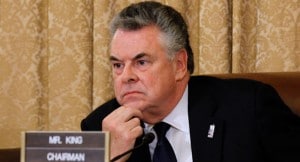