Mandeville, LA – Exclusive Transcript – I’m going to throw this out there again for your fertile imaginations.  If you were using chemical weapons and bombing with impunity, and if you were truly worried about their continued or future use, why haven’t they been used again?  If you’re doing it with impunity, that means you don’t care what the rest of the planet thinks.  It’s been almost three weeks.  Why haven’t they been used again?  Check out today’s transcript for the rest…

Earlier today, Charlie Rose who traveled to Damascus previously, interviewed Syria’s president al-Assad at the presidential palace. The interview will air in its entirety on PBS’s “Charlie Rose” show on Monday night . . .

Mike:  So Charlie Rose would go up against this, but I would imagine if you want to watch this, you could probably get it at the PBS website when they have posted it.

In the interview, previewed by Rose on CBS’s “Face The Nation” on Sunday morning, Assad denied that he had anything to do with the chemical weapons attack . . .

Mike:  This is not the first time he’s denied it.  He continues to deny.  [mocking] “Well, of course the guilty always deny they had anything to do with all the killing and the gassing of their own people.  They’re never going to admit that, now, are they?”

Rose also said the Syrian president would not confirm or deny that the regime has chemical weapons. When asked if Assad thought there would be an attack, the president told him “I don’t know.” [Mike: There are highlights of the interview at Politico.com.]

Founders TV – War Isn’t Netflix Or Hulu, You Shouldn’t Have To Be Sold On It

Assad denied that he had anything to do with the attack. He denied that he knew there was a chemical attack, notwithstanding what has been said and notwithstanding the videotape. He said there’s not enough evidence to make a conclusive judgment. He would not say even though I read him the lead paragraph of the New York Times today in the story about their chemical weapons supply. And he said: I cannot confirm or deny that we do have them.  He did, however, say that: If in fact we do have them, and I am not going to say yes or no, they are in centralized control and no one else has access to them. [Mike: We can fix that, Bashar. Don’t worry, baby. We can fix that. We can make sure every terrorist nutjob on the face of the planet has access to them. Just ask John McCain and John Kerry.]

He suggested, as he has before, that perhaps the rebels had something to do with it. He said that he did not necessarily know whether there was going to be a military strike. He said that they were obviously as prepared as they could be for a strike. [Mike: Then Bob Schieffer chimes in and asks a question and Charlie Rose responds.]

Bob, that was the very first question. I asked: Do you expect an attack? He said: I don’t know. He said: We prepared as best we can. He did not say that he assumed there was going to be an attack in Syria because of the chemical weapons. I also pursued the question of whether there was anything that he was prepared to do, anything to stop the attack, for example, to give up chemical weapons, if that would stop the attack. I also raised the question with him did he fear that, if there was an attack, it would degrade his own military, and therefore make it more likely that it might tip the balance? He’s very, very concerned about that as an issue.

He talked about his father and the lessons that he learned from his father, that war was ruthless, and that after Homma, his father went all out to destroy, at the time, the Muslim Brotherhood. [Mike: Gee, we would never want to ally with someone that was out to destroy the Muslim Brotherhood, now, would we?] So he was calm. He knew the situation he was in. In fact, Damascus seemed relatively calm, the places I was today, but there is a clear sense that they are closely watching what is happening in Washington. I think the reason they did this interview today, we’ve been trying for a long time, but we did it today because they’re watching what happens in Washington.

Mike:  Consider just for a moment now, you have this body of alleged intelligence that purports to show that this atrocity was committed with the full knowledge and blessing of the president of the sovereign state of Syria.  As John Kerry, Secretary of State, continues droning on endlessly, and as the president continues droning on endlessly [mocking] “They’re bombing with impunity.”  I’m going to throw this out there again for your fertile imaginations.  If you were using chemical weapons and bombing with impunity, and if you were truly worried about their continued or future use, why haven’t they been used again?  If you’re doing it with impunity, that means you don’t care what the rest of the planet thinks.  [mocking] “If we don’t send a message, he’ll keep using them.”  Okay.  Well, you haven’t sent a message yet.  It’s been almost three weeks.  Why haven’t they been used again?  The guy is out there.  If he’s this unabashed serial gasser, why hasn’t he gassed anyone since the alleged attack on August 21st?  Lots of questions, folks.  Let me throw this into the mix here for your consideration today.  AG, have you seen the latest Gallup poll on the popularity of our latest war?

Mike:  I have them.  This is from Gallup.  This is polling that went through September the 4th.  They’re going to update the poll after Obama speaks tomorrow night.  We’ll see if he can convince this country that we must go to war.  What I find very interesting and somewhat depressing about the poll is that they are comparing the popularity of the military campaign yet to be waged in Syria and they have four wars that they can compare it to in the last 22 years.  Remember the Carlin bit “We average a major war every 20 years.”  We’re good at it.  Guess what, George?  God bless him, he’s dead.  We now average a major war every five years.

Fast forward to September 3 and 4 of this year and only 36 percent of the people, apparently having been chastened by the previous four wars that I mentioned, approve of or favor military intervention in Syria, with 51 percent saying they oppose.  Here’s another number you might find interesting, and that is the amount of people that are now following the story in Syria.  If we look at July of this year, only 48 percent of people were following the Syrian story very closely.  Fast forward to September 2013 and now 71 percent of people are following the story very closely, as opposed to 29 percent that are not following closely.  That number will probably increase as NFL week one gets everyone in their fantasy football teams, some data to operate on and some things to be excited about besides wars.

Just think about that for a moment.  The Persian Gulf, Kosovo, Iraq, Afghanistan, and now Syria — they’re not even including Libya in here.  There’s another poll that includes approval or disapproval of military action that goes further back.   It goes back to April 17, 1986 for the invasion or bombing of Libya; October 26 and 27, 1983 for the shelling or invasion or whatever it was in Grenada; in Somalia June 18 and 21, 1993 you’ve got 65 percent of people approving of that.  And Libya, a poll taken March 21, 2011, only 47 percent approve with 37 percent disapproving.  Here is the number, though, ladies and gentlemen, that is the most depressing, although we could say that maybe the number we have for today is encouraging.  The most opposition to any intervention going back to 1983, the most public opposition previously was the bombing of Kosovo in the Balkans undertaken by President Clinton and the Gingrich-led Congress in 1999 with 45 percent in opposition.  Now there are 51 percent in opposition to the action in Syria.

Gallup also says don’t use that as your guide because as soon as the bombs start dropping, Americans get really excited about these wars.  Public approval tends to go up on average over ten percentage points.  This might be part of the calculus here, folks.  If you’re wondering why Congress is even going to have a debate on this if the public is so opposed to it, the reason is because once the bombs start flying, people get the popcorn out and turn the news on and go: Oh, man, look at that  missile launch.  That’s awesome!  Or they get browbeaten into this [mocking] “We’ve got to support our troops.  You need to get in line and support our troop.  We talked about this on Friday, how supporting the troops has become the new American religion.  I don’t mean that in a derogatory sense, because some of us would rather not see troops deployed in any of these interventions. 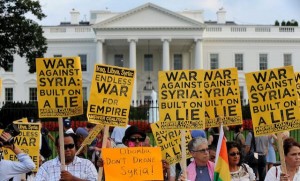