Mandeville, LA – Exclusive Transcript –“Protestant, denominational, evangelical, it doesn’t matter.  This applies and pertains to you because if this bow breaks, that means that God has basically served notice that he’s done with us.  There is going to be a holy poop storm coming our way that we’re either going to weather or we’re going to be the generation that will be remembered as the next great cleansing after Noah’s flood.”  Check out today’s transcript for the rest….

Mike:  Let’s start with the simple things that are in “Amoris Laetitia” and on the subject of marriage.  Pope Francis waits till paragraph 298.  This is a long way in.  This document is what, 300 pages long?

Mike:  256 pages long of what some have termed as sociological gibberish.  He starts to explore some of the questions surrounding what divorced people, like me – what I find about this, I can speak with some authority on this, is that I’m one of the people that should be out in the streets waving a Francis flag right now if I didn’t know the magisterium.  Because I do, I am duty bound to say: No, he’s wrong.  I’m not going to expose myself to that error and ask my priest to expose himself to that error and ask him to do what Pope Francis says could be considered to be done.

Protestant, denominational, evangelical, it doesn’t matter.  This applies and pertains to you because if this bow breaks, that means that God has basically served notice that he’s done with us.  There is going to be a holy poop storm coming our way that we’re either going to weather or we’re going to be the generation that will be remembered as the next great cleansing after Noah’s flood.  To believe that this does not matter and doesn’t pertain to all I think is one of the problems or one of the issues that we have to address.

Ferrara:  The Church’s teaching on marriage, which rests upon divine and natural law, applies to every man, woman, and child on the face of the Earth, such as the Catholic think.  If you’re a Catholic and if you’re a Protestant, go to the internet and read the encyclical that you just mentioned, “Casti Connubii.”  Use Google, find that encyclical, and read it.  If you’re a Catholic, it will enlighten you.  If you’re not a Catholic, if you’re some sort of Protestant, perhaps an evangelical, if you read this document attentively, I would wager that you would be on the way to conversion.  You can join us in defending within the Catholic Church the magnificent teaching of that document.

Now, what is the Church’s teaching on marriage?  Christ tells us that teaching in the gospel when he says that the two become one flesh and that they may not be put asunder.  He says to the Pharisees: Moses allowed you to practice divorce out of the hardness of your hearts, but it was never so.  And He, Christ, proceeded to elevate marriage to the level of an indissoluble bond which is sacramental in character.  When two baptized people take marriage vows before God, they are bound indissolubly for life, until death do they part.  This is the key teaching that our Lord thundered at the Pharisees: I say

to you, whoever puts away his wife, and marries another, commits adultery.

Whoever.  There are no exceptions because the bond with Christ in marriage, in which both partners are configured to Christ, cannot be broken.  If one spouse leaves the other, that bond still exists.  If one spouse takes up with another woman and pretends that he can remarry her civilly, the bond still exists.  He’s committing adultery.  God himself teaches that.  No one can overthrow that teaching, not even a pope.

That’s what’s at stake in this document.  How is it at stake?  Well, the Church proclaims the dogma of the indissolubility of marriage.  Then there is a related pastoral practice.  If someone puts away his wife, marries another, pastoral practice dictates that this public adulterer cannot receive the body of Christ in Holy Communion because he would be committing a sacrilege.  It doesn’t matter what he thinks subjectively about his own condition.  Even if it could be imagined that someone would be ignorant of the Church’s teaching that you have committed adultery if you divorce and civilly remarry, it could be imagined that through some form of self-delusion this person has convinced himself that he did the right thing, still the Church insists that because of your objective, your outward, your public condition, 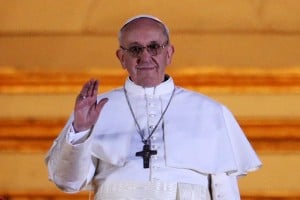 you cannot be allowed to approach Holy Communion and receive into yourself the body and blood of Christ because this would profane the sacrament, scandalize the faithful, and cause objective harm to the common good of the Church.

Every single pope before Francis for 2,000 years insisted on this discipline.  Benedict XVI insisted upon it.  John Paul II insisted upon it.  The pontifical council, the legislative texts in 2000 rejecting exactly what Francis is trying to pull off now, said that this discipline is not just mere ecclesiastical law.  It’s rooted in divine revelation and transcends the domain of mere ecclesiastical laws which could be changed.  This particular law of the Church is unchangeable.  If you change it, if you say that adulterers can receive Holy Communion, you’re really saying that their marriage was not indissoluble, that it doesn’t matter that they abandoned their true wife or their true husband, that they can go ahead and act as if there was nothing wrong with their discipleship.  That’s impossible, yet Francis, in this document, is attempting to pull it off in “certain cases.”  It’s impossible to exempt one person from a law that binds all without destroying the law.  It would be like saying the speed limit in this town is 35 miles per hour but some people can go 70.

Mike:  When our Lord, when Christ says that the person would commit adultery, before Christ had said this, we had this on other good authority because it came to us in the form of one of the Ten Commandments: Thou shalt not commit adultery.

Mike:  It’s not as though this was even a new teaching for our Lord.  He just clarified it and basically told the smart guy Pharisees: No, you clowns are wrong and you’ve been wrong.  This is what my Father meant when the commandment was handed down.  This is what the teaching is.  There’s no ambiguity in it.  He didn’t leave any room for ambiguity.  It is amazing to watch or to read people who will search for the placement of a comma or a semicolon and say: Well, if there wasn’t a semicolon.  You’re taking someone’s translation of the words that came from our Lord and then resorting to punctuation tricks to try and assert that there’s an opening here.  What part of not ambiguous don’t people get?  This is what amazes me.  [mocking] “Well, that’s in certain cases.”  No, it can’t be in certain cases.

The natural law, which is written on his heart, as St. Paul says, is that disposition of the rational soul that innately inclines man to do good and to refrain from evil even though his will is darkened and weakened by original sin.  He still has that innate tendency.  It’s written on his heart.  He knows instinctually what is right and what is wrong in the big cases, even if in small cases of application his darkened intellect can make mistakes.  The big cases, of course, include cheating on your wife, adultery, killing, stealing your neighbor’s goods.  We all know those things are wrong.  The only problem with natural law lies in its application in some particular cases.  For example, what constitutes conversion of goods?  What constitutes usury, how high an interest rate and all these other little particular matters?  The general principles have to be applied in very concrete and particular complex, factual scenarios.  Not adultery.  Our Lord said it’s adultery.  Whoever puts away his wife and marries another commits adultery.  A very simple principle.  No difficulty of application.  That applies to every man, woman, and child on the face of the Earth.  No one is exempt from it.  It’s not just a Catholic thing.  What the Catholic Church is doing is defending the universally-applicable natural law, which right now – this is an apocalyptic development and has to be said – is under attack by members of the hierarchy itself.

Mike:  I’d like to cover a subject here that is probably the most controversial part of this.  Before we flesh out in any more detail what it is that is at stake here, I’d just like to cover an aspect of this that I think is going to make or break, to use the cliché, what is going to happen as a result of this.  I’m going to read something to you from Voice of the Family.  They got it from the Code of Canon Law.  Some people are going to go, [mocking] “Come on, Mike, you and Ferrara are way out in left field on this one.  We don’t understand this.”

Perhaps it’s time to start understanding this because if this stuff doesn’t matter, then nothing else really does matter.  We’re talking about life itself.  If the indissoluble institution of holy matrimony is not defended, and is not defended like our veritable lives depend on it, and they do, then it’s really over.  We may see the antichrist in the next coming weeks here.  Who knows?  He may be here already.

According to the knowledge, competence, and prestige which they possess, they have the right and even at times the duty to manifest to the sacred pastors their opinion on matters which pertain to the good of the Church and to make their opinion known to the rest of the Christian faithful, without prejudice to the integrity of faith and morals, with reverence toward their pastors, and attentive to common advantage and the dignity of persons.

Mike:  Basically we have the law, canon law, the law of the Church, we have Catholic law on our side.  It seems to me, Christopher Ferrara, that we are duty bound to do all that we can about this.  Where

The Catholic Church is not and never has been a dictatorship.  Pope Benedict XVI made this clear.  He said the pope is not an absolute dictator whose will is law.  Rather, he is a custodian, a caretaker, and a defender of what has been handed down to him for safekeeping.  He must not, Pope Benedict said, promulgate his own ideas.  He must not, Pope Benedict said, water down the gospel.  He must not succumb to opportunities for appealing to the crowd.  The pope has to defend what is handed down.  He has to defend the truth.  If he takes actions that harm the truth and therefore the common good of the Church, we have every right to speak out against it.