Mandeville, LA – Exclusive Transcript – As some suggest that Senator Ted Cruz of Texas might be a frontrunner or one of the leaders to campaign in 2016 for the Republican nomination for the presidency, there is the issue, especially for all you birthers out there, there is the issue of his eligibility.  Is he a natural-born citizen?  Check out today’s transcript for the rest…

Mike:  As some suggest that Senator Ted Cruz of Texas might be a frontrunner or one of the leaders to campaign in 2016 for the Republican nomination for the presidency, there is the issue, especially for all you birthers out there, there is the issue of his eligibility.  Is he a natural-born citizen?  I told you last week that I thought he was because he owed allegiance to the United States, even though he was born in Canada.  It would depend on how his mother signed the birth certificate.  I’m very surprised to learn and eager to report to you that I asked this question of my friend and yours, Professor Dr. Kevin Gutzman.  I specifically asked for the definition of natural-born citizen back in 1788 when the Constitution was ratified.  It was James Madison’s explanation that natural-born meant you were a citizen at the time of the Declaration of Independence was adequate.  Professor Gutzman told me no, that’s not adequate.

Where the explanation is comes from a book written by the Monsieur de Vattel.  The book is called A Commentary and Inquiry on the Laws of Nations.  In Chapter 19 of the book, Book I, you will find “Of Our Native Country” and several things that relate to it.  The reason I’m bringing this up, number one, is because Cruz is in the news and he is going to all the places that GOP candidates go to.  He may be thinking he’s going to throw his hat in the ring.  Number two, many of you have asked me to define or form an opinion on whether or not Senator Cruz — and also there would be another question for Senator Rubio — whether or not they’re eligible.  According to Vattel, Cruz is not eligible.  Since I don’t know the status of Rubio’s parents, my understanding is that Rubio’s parents were not citizens, and they certainly weren’t natural-born citizens at the time of his birth, and therefore he is also not eligible.

The reason this is important is because if you were a member of that august group of men that we call the founding fathers and you read the law, which is how they said you became a lawyer, if you were reading law, you probably read Vattel.  As a matter of fact, you probably had a copy of Vattel.  The book was written in either Latin or French.  It was translated into English.  I think Madison’s copy was in French.  You probably had a copy of this book.  Whatever Vattel’s understanding of the law was would have been one of the sources you would have gone to to develop your own opinion on the law and what you thought it should be here.  That’s why this is important.  We know that Jefferson owned a copy.  We know that Hamilton and Madison and Randolph had copies of Vattel’s book.  It was widely relied on and quoted.  Here’s how Vattel defined natural-born citizen.  “Citizens and Natives” is subsection 212….

The citizens are the members of the civil society; bound to this society by certain duties, and subject to its authority, they equally participate in its advantages. The natives, or natural-born citizens, are those born in the country, of parents who are citizens.

Mike:  Cruz was born in Canada.  He was not born of the country or born in the country of natural-born citizens.  That’s pretty much an open-and-shut case.  The answer is no.  Similarly, for all you birthers out there, this is why the question of President Obama’s birth in Hawaii is probably why they relied so heavily on that birth certificate being generated.  Being legitimate from Hawaii would be important because it would make him — because Hawaii, having been a state at the time, would then be part of the “country.”  Actually, it would be the country of Hawaii and would make him a natural-born citizen of Hawaii.  Would the Soetoros, as they were at that time, were they natural-born citizens of the United States?  Mrs. Soetoro was but Mr. Soetoro was not.  The president was born in the United States.  If he was born in Indonesia, again, an open-and-shut case.  It doesn’t matter what his parents were.  According to this definition, he could not be president.  I know many of you think he was born in Indonesia.  We probably will never know.  Lord Monckton thinks that Obama’s birth certificate is a fraud.

That’s as far as I’m going on this.  By the way, this is not birther radio.  I’m not taking any commentary on Obama’s birth certificate because he’s already president and it doesn’t matter.  However, we do have another decision to render here or might have one in the very near future.  This definition does matter and it is important.  What is Senator Rubio?  Senator Rubio could only be eligible if — he was born in Florida — if his parents were naturalized or natural-born citizens and he was born in the United States.  We know that that was not the case.  Listen to the rest of the definition.  It gets even more intriguing.

The natives, or natural-born citizens, are those born in the country, of parents who are citizens. As the society cannot exist and perpetuate itself otherwise than by the children of the citizens, those children naturally follow the condition of their fathers, and succeed to all their rights. The society is supposed to desire this, in consequence of what it owes to its own preservation; and it is presumed, as matter of course, that each citizen, on entering into society, reserves to his children the right of becoming members of it. The country of the fathers is therefore that of the children; and these become true citizens merely by their tacit consent. We shall soon see whether, on their coming to the years of discretion, they m ay renounce their right, and what they owe to the society in which they were born. I say, that, in order to be of the country, it is necessary that a person be born of a father who is a citizen; for, if he is born there of a foreigner, it will be only the place of his birth, and not his country.

The Constitution – How The Founding Fathers Defined Natural Born Citizen

Mike:  Now that we’ve read the entire definition, and we know that President Obama’s father was not of this country, then it would then make him ineligible, regardless of what his birth certificate says.  How do you like that? 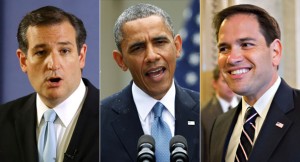 I cannot find the book you cite. I find references to Vattel and simply “Law of Nations” but nothing like the title you use. What gives?

I would hope Senator Cruz would step up for the Constitution, and declare himself ineligible, thereby, throwing the argument over Obama’s qualifications under the proverbial bus.