Mandeville, LA – Exclusive Transcript – Madman after madman after madman has received their fair share of American exceptionalism, yet here we are listening to these madmen tell us that if we don’t intervene this time there will be more madmen.  Just hold on a second here!  We have been exterminating madmen for near 70 freaking years.  Every time a new madman comes up, you say we have to exterminate him, we have to invade his country, we have to flatten that country like a pancake, we have to exterminate tens of thousands of innocent civilians along the way so that we can prevent another madman.  Yet here’s another madman.  Check out today’s transcript for the rest…

Mike:  This has to be the most convoluted, most idiotic buildup for a war, or I should say setup as an excuse to wage a war, in the history of the modern means of communication.  Here’s another maddening thing: we have in front of us all the intelligence and all the news that you need to know that would tell you cooler heads ought to prevail here.  As Serge Trifkovic points out at Chronicles magazine website last night, were this a court of law, Kerry and Obama would lose and Assad would walk.  The circumstantial evidence is not enough for a conviction.  There’s enough reasonable doubt here to spring Assad.  He’d get off, yet we’re going to convict him and spend tens of billions of dollars.

The entire fabric of this resolution that came out of the Senate yesterday that there will be no boots on the ground is bogus.  There will have to be some boots on the ground.  Besides that, as Judge Napolitano pointed out to Neil Cavuto yesterday, once Congress tells Obama to start bombing, there’s not very much that Congress can do because then the commander in chief powers kick in, the legitimate ones, and the president can send or do whatever he thinks he needs to do to execute, what was the McCain amendment yesterday?  To take the advantage away from the Assad regime, I believe that’s the wording.  How do you propose to kneecap, again, the legitimate army fielded by the legitimate government of the sovereign country of Syria?  How do you propose to do that?  There’s no way to execute that by lobbing missiles from air craft carriers, besides the fact that the Russians are parking missile-capable carriers next to where the American carriers are.

Do you idiots really want to piss off the Russians like this at this particular moment in time?  Is this really the best thing and the best use of our limited resources?  No matter how you slice this, it does not add up.  The budget of the United States at the end of this fiscal year will still be somewhere between $700 to $800 billion in arrears.  In other words, we will spend $700 to $800 billion more than we will take in.  Going to war and starting another war will do nothing more than direct valuable resources that would ordinarily be put into productive endeavors, it will direct those resources instead into making bombs to destroy things and kill people in Syria.  How does this happen?  Who is responsible for this propaganda and this campaign?  I think we have the answer to that.

What else did our dear, fearless leader say yesterday?  [mocking Obama] “I didn’t set a red line.  My credibility is not on the line.”  I love this line about chemical weapons not being tolerated.  Okay.  Well, they were launched.  This isn’t the first time a chemical weapon has been used, not even the first time a chemical weapon has been used in Syria, yet there was no red line.  Neil Cavuto asked the question and I asked the question as well, why is it okay to kill or maim people with automatic or semiautomatic weapons but it’s not okay to asphyxiate them?  Let me make it more uncomfortable for the warmonger set out there.  Why is it okay to vaporize human beings using nuclear armaments and nuclear devices, as were used in Hiroshima and Nagasaki [mocking] “You’re at war and you gotta do what you gotta do, right?  Those Japs deserved it.  They had it coming.”  Yeah, those villagers in that nunnery and monastery in Nagasaki, yeah, they had it coming all right.  So why is that okay?  Then the indiscriminate killing of tens of thousands of Christians in Darfur and other places in north Africa, the indiscriminate killing of Christians in Libya who remain on the run today and are basically refugees looking for places they can flee to so they can escape the impeding violent caliphate that’s being rained on their heads, and ditto that for the people of Egypt.

This just makes no sense.  The only sense you can make of this is that the fix is in and this was ordered and designed a very long time ago.  There is obviously some kind of fiscal or economic issue or problem that is at stake here that requires this action be undertaken.  Follow the money.  Who is it that stands to benefit from this?  No, our national defense and our national security does not benefit from this.  [mocking] “America’s standing in the world and our national security demands it.”  Why does our national security demand it?  The explanation that you’ll get is the domino effect.  [mocking] “Well, if there’s one bad actor on the earth and if the United States doesn’t move immediately to show them that the world’s greatest military hardware, the most expensive military hardware ever designed to kill and maim people will be brought to bear against them, then that opens the door for more madmen to do their bidding.”

Madman after madman after madman has received their fair share of American exceptionalism, yet here we are listening to these madmen tell us that if we don’t intervene this time there will be more madmen.  Just hold on a second here!  We have been exterminating madmen for near 70 freaking years.  Every time a new madman comes up, you say we have to exterminate him, we have to invade his country, we have to flatten that country like a pancake, we have to exterminate tens of thousands of innocent civilians along the way so that we can prevent another madman.  Yet here’s another madman.  Is any of this sinking in?  Does any of this make sense?  You cannot use the excuse [mocking] “If we don’t stop Assad now, we’re going to have all kinds of chemical attacks.”  It’s the exact same logic used against Saddam Hussein, exact same.  How could Assad not know that we invaded Iraq?  For that matter, how could Gaddafi not know, or any of the other ones?

The bill of goods, the advertising sales program is bogus.  It is a fraud.  There’s no effort here to [mocking] “stop the world’s madmen.”  If American leadership doesn’t prevail,” as I just pointed out, then explain to me what we have been doing for the last 70 years.  [mocking] “Yeah, but Obama screwed all that up.”  He did?  Obama took a madman out.  Obama took out the biggest arch-villain in the latter part of the 20th century.  What was his name, Osama bin Laden?  I think that guy’s dead.  But if we don’t act, there will be other madmen.  Maybe it’s possible that even if you do act, and regardless of your actions there will be more madmen — as a matter of fact, it may even be an easier point to make now by virtue of the fact that you do indiscriminately act and intervene and meddle and you are in fact paving the way for the creation of future madmen.  But then again, that’s just me thinking logically and using the recent history of these United States as a backdrop to do so. 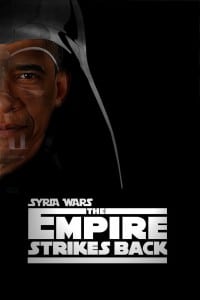