Mandeville, LA – Exclusive Transcript – Folks, some of us have been warning you and warning the country and warning our fellow countrymen about this awful thing called the AUMF, the Authorization to Use Military Force.  This will allow never-ending wars to continue.  Congress doesn’t have to authorize them.  They don’t actually have to authorize them.  Then they don’t have to vote on them.  They don’t have to vote on two-year-long appropriations to support the wars.  All they have to do is say: Obama did it!  Check out today’s transcript for the rest…

Mike:  I want to get back into this piece here from Glenn Greenwald about the world’s largest military and about how we are committed to a never-ended, permanent, perpetual war.  Is that really, really advisable?  If you were going to design a new country and write a constitution and then congregate people under it, would you have as one of your goals the implementation then, waging of, and defense of a never-ending war?  We seem to look back on history and look at the wars of antiquity and some of the ones that lasted long, long, long times, and look at them not so much about how glorious they were but why did the 30 Years’ War have to last 30 years?  It’s usually because someone is either trying to gain benefit from or is gaining benefit from said war.  I believe that’s the case here in the United States.  Greenwald points this out in his piece.  This is posted in today’s Pile of Prep under the title of “How Deep Is Your Glove? The DOJ Shoves Warrants Into Places Never Seen Before.”

Mike:  Wait, I must read this again.  What do you mean they anonymously unveiled to the Washington Post?  That sounds like a leak.  Doesn’t that sound like a leak?   You’re unveiling things about national security to a news media organization.  Isn’t that a leak?  We’ve got to get to the bottom of these leaks and stop them.  We have a never-ending war that we must wage and we can’t have whistleblowers out there ratting us out for violating our oaths of office and conspiring to spy on the American people.

Pile of Prep: How Deep Is Your Glove? The DOJ Shoves Warrants Into Places Never Seen Before

Mike:  Andrew, have you ever heard of this thing, the “disposition matrix”?

. . . a complex computer system that will be used to determine how a terrorist suspect will be “disposed of” . . .

Mike:  Folks, if you’re driving, pull over.  If you’re standing, sit down.  Woe to any of us if we ever get identified or become identified as terrorism suspects.  [mocking] “Hey, Lenny over at CIA, you see that snoop?  You see that snooping information we got?  You see that guy that’s with that ReFounding Father Society group?  Did you see that email he sent to the other dude in the ReFounding Father Society group?  I think this qualifies.  I think we need to get up to the boss.  We need to ask him if this guy qualifies as a terrorist.  They were talking about teaching the Constitution.  What is this code word they keep using: republicanism?  That’s got to be code.  It’s code for something despicable.”  So here’s how a terrorist suspect will be disposed of using the disposition matrix:

. . . indefinite detention, prosecution in a real court, assassination-by-CIA-drones, etc. Their rationale for why this was needed now, a full 12 years after the 9/11 attack:

“Among senior Obama administration officials, there is a broad consensus that such operations are likely to be extended at least another decade. Given the way al-Qaida continues to metastasize, some officials said no clear end is in sight. . . . That timeline suggests that the United States has reached only the midpoint of what was once known as the global war on terrorism.”

On Thursday, the Senate Armed Services Committee held a hearing on whether the statutory basis for this “war” – the 2001 Authorization to Use Military Force (AUMF) – should be revised (meaning: expanded). This is how Wired’s Spencer Ackerman described the most significant exchange . .

Mike:  Folks, some of us have been warning you and warning the country and warning our fellow countrymen about this awful thing called the AUMF, the Authorization to Use Military Force.  This will allow never-ending wars to continue.  Congress doesn’t have to authorize them.  They don’t actually have to authorize them.  Then they don’t have to vote on them.  They don’t have to vote on two-year-long appropriations to support the wars.  All they have to do is say: Obama did it!  [mocking] “I wonder why the president isn’t out there waging the wars we told him to wage?”

That reminds me, by the bye, I forgot to say this yesterday.  For all of you out there that just can’t wait for the next war to begin, because the Syrians are coming to kill us next — I don’t know if you got the memo.  That’s right, the Syrians are coming to get us all.  They’re coming to gas us with sarin gas.  For all of you that can’t wait to get into the next war, which is the one that you want to start with Syria, and you’re PO’d at Obama because he hasn’t done it yet, why don’t you ask your boy Boehner to start it?  After all, it’s Congress that can actually declare the wars.  He doesn’t have to wait for Obama to do it.  He can make Obama become a commander in chief and lead us into battle against those evil, despicable Syrians so we can join our buddies the rebels.  Right?  Right?  Am I right, class?

Article I, Section 8: “To declare War, grant Letters of Marque and Reprisal.”  All that’s needed is for all the decepticons to get together with their progressive buddies in the House, pass a declaration of war against Assad, say he’s a threat to the known universe and he’s got to be killed, so we’ve got to get in there and take him out, install a government that’s to our liking.  I would think there would be enough votes in the United States Senate.  They seem to like war over there, too.  They’ve got buddies that make armaments.  They have friends in the military.  Then all that is needed to force the president to become a commander in chief is for Congress to actually exercise its statutory authority in foreign affairs.  This duty was left in the hands of the House of Representin’.  It wasn’t left in the hands of the president.  When all of you decepticons out there — that is a constitutional inconvenience, though.  That’s yet another inconvenient truth we don’t really want to deal with now, do we?  Let’s not deal with that.

So if you think this is such a great idea, stop calling Congress and pestering them about Obamacare.  Leave that silliness to other people, like me.  You need to start calling Boehner and Louie Gohmert and Michele Bachmann and whoever else will listen.  I don’t know that Louie will be amenable to this, but he is a member of the House of Representin’, is he not?  You need to tell them: Hey, Congress, how about a little something, you know, for the war effort?  You need to get in there and make a declaration.  We gotta get over there and take this Assad guy out.  While we’re there — this is another one.  Why wait for Obama to start bombing Tehran and the Iranians?  They’re next, aren’t they?  You so desperately want to go take those nukes out.  Well, have Boehner declare war against Mahmoud Ahmadinejad and the Iranians.  Oh, what fun it’ll be.

Why don’t we just raise a really large army and invade the entire peninsula?  We can then become the Ottoman Empire.  How about that?  Oh, what great fun this will be.  I can’t wait for my son to graduate high school to be called up over there, how about you?  And don’t forget, there’s still the North Koreans, and they are evil.  That little chunky Kim kid, a fat kid with a nuke is not to be trusted, let me tell you.  We’ll have to get the Navy involved in this one.  We do have the ability to send troops via land up through the South Korean part of the peninsula.  Just think, don’t just mess around with these drones and these terror camps that we’re in search of. Let’s get really busy.

Mike Church Show Transcript: Community Is The Most Effective Tool For Fighting Terrorism

I stopped in the middle of the Greenwald piece because I forgot to mention that about how it is that all of decepticonia, once again, is just totally ignorant of the Constitution.  It’s only conveniently used when it can be used as a club to bludgeon the other side, or when it’s fundraising time.  They’ll use it then, too. 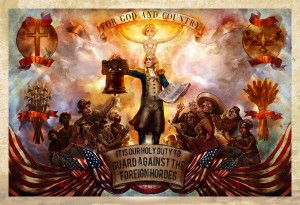