Mandeville, LA – Exclusive Transcript – There was a woman who was riding in a bus.  She sees the British soldier lying on the ground bleeding.  She yells for the bus to stop.  She gets off so she can go provide first aid.  She’s a cub scout leader.  Her name is Ingrid Loyau-Kennett.  She engages the terrorist who’s still standing in the street with a bloody machete in his hand, blood all over him.  She engages him and keeps him at bay, talking and screaming for 20 minutes while the bobbies arrive.  Check out today’s transcript for the rest…

Mike:  There was an attack in London yesterday.  If you’re looking for some analogous information — were you able to find that audio, by the bye?

Mike:  Many of you have heard this story or may have seen it.  A couple of British terrorists, or they’re being labeled as terrorists now.  They’re dead now I believe —

Mike:  Oh, I thought they were dead.  I tell you what, Sky News needs some freaking headline writers.  The story I have here is that the two — so they’re alive.  So they captured these guys.  The British soldier is dead.  They kill this guy on the streets of London.  There was a woman who was riding in a bus.  She sees the British soldier lying on the ground bleeding.  She yells for the bus to stop.  She gets off so she can go provide first aid.  She’s a cub scout leader.  Her name is Ingrid Loyau-Kennett.  She engages the terrorist who’s still standing in the street with a bloody machete in his hand, blood all over him.  She engages him and keeps him at bay, talking and screaming for 20 minutes while the bobbies arrive.  Part of the audio that Andrew has is part of the action that happened yesterday after the fact, I believe.  This is after onlookers then came with cell phones and other video recording devices and picked up the audio of the terrorist or the guy who had taken the machete to the British soldier.  First of all, he apologizes to the women that had to witness this, but then he goes on to say that women in Afghanistan witness this kind of stuff every day.  Let’s listen to what audio we have.

Reporter Paul Davis: In a south London street, a man with bloodied hands carrying a knife and machete approaches a camera, and tries to justify what has just happened.

Attacker/Terrorist: I apologize that women had to witness this today, but in our land, our women have to see the same. You people will never be safe. Remove your government. They don’t care about you.

Davis: He then walks back up the road, back towards the victim of this attack who lies prone in the street, a young man believed to be a soldier. The man with blood on his hands then talks to a second man. There are also heated conversations with passersby, people who have witnessed appalling violence, some of whom tried to stop it. But there was more violence to come. These pictures were taken shortly after the police opened fire on the two apparent attackers, who, according to witnesses, made to attack the officers. These pictures were taken by a man who had been on a bus heading for a job interview the day Baghdad-style violence came to south London. Paul Davis, ITV News.

Mike:  The dispatch I have from Reuters is:

A machete-wielding attacker and his gun-toting sidekick killed a man in the streets of London on Wednesday, and police are regarding the pair – whom they subsequently shot – as potential terrorists.

Mike:  What’s shocking is what the guy was yelling to the camera.  What he was yelling to the camera was: You people are never going to be safe.  That’s what he was yelling to the camera.  He was telling people in London.  Those are the “you people” he was referring to.  I bring this up for a couple of reasons.  The most salient and most obviously pressing point in the current discussion is the guy who’s holding the machete is the kind of man that is going to be opposing the Assad regime.  That man is going to be the typical recipient of American weapons and munitions.  It doesn’t matter how you vet him.  Do you really think that you’re going to stop that guy from using that weapon in any manner that he wants to and then turning it on who gave it to him?  This is just nuts, absolutely nuts.  From the London Telegraph we get this.  The woman who kept the man at bay while the cops took their jolly time, almost 20 minutes, in arriving, the London Telegraph reports that Ingrid Loyau-Kennett, 48-year-old mom and cub scout den leader said this:

“Being a cub leader, I have my first aid so when I saw this guy on the floor I thought it was an accident then I saw the guy was dead and I could not feel any pulse.

“And then when I went up there was this black guy with a revolver and a kitchen knife, he had what looked like butcher’s tools and he had a little axe, to cut the bones, and two large knives and he said ‘move off the body.’

“So I thought ‘Ok, I don’t know what is going on here’ and he was covered with blood. I thought I had better start talking to him before he starts attacking somebody else. I thought these people usually have a message so I said ‘what do you want?’

Moments earlier, the killers had hacked at the soldier “like a piece of meat”, and when Mrs. Loyau-Kennett arrived on the scene they were roaming John Wilson Street waiting for police to arrive so they could stage a final confrontation with them.

She said: “I started to talk to him and I started to notice more weapons and the guy behind him with more weapons as well. By then, people had started to gather around. So I thought OK, I should keep him talking to me before he noticed everything around him.

Mike Church Show Transcript: The Power Genie Is Out Of The Bottle And Running Amok In The National Government

How many lives did this mother of two save by distracting the terrorists while it took police TWENTY MINUTES to arrive? She’s a hero. The greatest Brit since Smeato!

Mike:  The Allahu Akbar nutjobs on the streets of London are the kind of men who will be the recipients of American munitions in their fight against the Assad regime.  Does that sound like a good idea?  When some of these terrorists, as they’re now labeled, attack and say things like: I did this because you people keep killing Muslims in Afghanistan.  You have no business being there.  Stop killing Muslims.  Most of official decepticonia is going to dismiss that as dementia or as delusion or insanity or the ramblings of a lunatic, and it may well be.  Can you with 100 percent certainty say that what animates and drives some of these people, as Michael Scheuer has said on this show many times, is exactly what the guy told the woman?  Yet we persist.  Not only are we going to assist, now we’re going to arm them.  It is all just so wicked and tangled of a web. 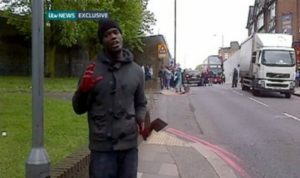 We have a history of backing groups that end up turning on us. Such behavior to the common citizen is viewed as obviously being completely insane. And yet our elected officials continue to do things that defy common logic. Could it be that there are a few in the ruling class that might be personally benefitting from such antics? I’m sure if you follow the trail of money it would become very clear. And if our ruling class is able to circumvent the laws and regulations we have established, how are they any different than the self serving tyrants that ruled us a couple of hundred years ago? Say hello to the new boss, same as the old boss.