Mandeville, LA – Exclusive Transcript – I’m currently a member of the military and have been for a while.  I just deployed and got back from Afghanistan.  I have firsthand experience of what you’re saying.  This is a complete boondoggle.  There were maintenance contractors and intelligence contractors and so forth earning well into the six figures in their income and they really didn’t do anything all day long.  In fact, we sat over there not doing anything all day long. There are some people over there that have it rough, but for the most part it’s like a college campus or spa over there with minimal risk.  Check out today’s transcript for the rest…

Mike:  To the telephones we go.  First up today is Aaron in Georgia.  Hello, Aaron, you’re on The Mike Church Show, Sirius XM Patriot Channel.  How you doing?

Caller Aaron:  I’m all right.  How you doing?

Caller Aaron:  I’ve called you in the past.  It’s probably been about a year or so since I spoke with you.  I’m currently a member of the military and have been for a while.  I just deployed and got back from Afghanistan.  I have firsthand experience of what you’re saying.  This is a complete boondoggle.  I watched contractors overseas, not just security contractors, although they were there in Afghanistan.  There were maintenance contractors and intelligence contractors and so forth earning well into the six figures in their income and they really didn’t do anything all day long.  In fact, we sat over there not doing anything all day long. There are some people over there that have it rough, but for the most part it’s like a college campus or spa over there with minimal risk.  The fact of the matter is, this is going to continue and they’re going to continue to dump billions and billions and trillions of dollars into this to save face.

Mike:  Can you save face in all this?  You were telling me about all the waste and abuse that you see there.

Caller Aaron:  Continual fraud, waste and abuse.  The place where I was at, they had more than 120 full colonels.  I didn’t know that many existed in the military, but they were there, ostensibly doing something, but I never saw any of them do anything other than stand around and jack their jaws.  You had contractors in every aspect, food service, maintenance on vehicles, intelligence operatives and so forth.  I spoke with a couple of them making well into the six-figure income.  The majority of them spent their time throughout the day hanging out, talking with each other, drinking coffee.  That sounds kind of hard to believe or whatever, but that is what they did.  While there were some soldiers there that had it rough, I’m not taking anything away from them wherever they were at, but this place was like yoga classes and fencing classes and language classes and people just BSing and hanging out, not doing a whole lot of anything for a year other than punching a ticket.  This big fraud, waste abuse that was going on was pervasive throughout this entire deployment.

I’ll give you a good for instance.  We have vehicles we had to work on to go out on patrol.  With these vehicles, a soldier used to be able to do what they call ten-level maintenance, which is just work on the vehicle themselves, check the oil and so forth.  We weren’t permitted to do that because it was given to a contract company and the contractor that was where we were at put a sign out and said: I’m at this other base.  You have to contact me over here.  He put the same sign on the door where we were at.  No one knew where this guy was at for six months.  They don’t keep track of them.  If that’s not fraud, waste and abuse, I don’t know what is…

Mike:  I’m sure that it is widespread and, if you happen to be in a situation where you can witness it, easily detectable.  I have to ask, what is their ostensible purpose?  In other words, what are they supposed to be doing there other than drinking coffee and suckling off the federal teat?

Caller Aaron:  Maintenance on vehicles, gathering intelligence.  There are some things they just don’t let soldiers do anymore because apparently they want to pay three times as much as they would pay a soldier to do it for someone else to do it.  Like I said, this is pervasive.  My experience spans from 1987 until present.  I’ve been in the military that long and I’ve seen all these things come and go.  I’ve never seen anything like this.  We had interaction outside where we were at.  Our biggest threat was not the so-called boogeyman that was embodied in the Taliban or the jihadists.  It was the Afghan National Security forces, and to a large degree, and I hope the NSA records this, the CIA handlers that were training their CIA equivalent, the Afghan CIA equivalent.

Mike:  So we’re training the future jihadis how to spy?

Mike:  I wonder if they get to use our super James Bondian spy equipment.  I’m sure we spare no expense and buy them nothing but the best.

Caller Aaron:  I could tell you the conversation that transpired at some point when they had their so-called special forces over there and their commandos, the Afghans.  I’m looking around at the training that was going on because we had went to ranges there before in the area where they operated and looked around.  A couple of people said to each other: I bet these guys are going to turn up in the next five to ten years in Europe or the United States.

Mike:  They don’t need to.  We don’t need any human intel.  All of us have been lulled into this electronic lifestyle now.  We’ve all been lulled, thanks to Steve Jobs and Apple and the digital lifestyle, as he called it at Macworld ’99, whenever he introduced iTunes at a Macworld expo in January at the Moscone Center.  I think it was in 2001.  The digital lifestyle is now the lifestyle.  The corresponding problem with it is that nearly everything that we now do is transmitted electronically.  It’s all zeroes and ones, bits of data that are encoded on our end and then decoded by operating systems and electronic microprocessors on the receiving end, and translated back and presented in a form that we can all understand.  This is what a GUI does, the graphic user interface.  That’s the purpose of it. It seems innocent and harmless enough.

Can you remember back in the day, Aaron, when you couldn’t wait to get a desktop Macintosh computer because you wanted to be able to make your own letterhead in the free version of Photoshop, or when you wanted to be able to publish your own little essay because you could get a free version of Adobe InDesign or QuarkXPress or something like that?  In other words, you couldn’t wait to do this because desktop publishing held out the promise to give everyone the ability to be their own printer.  You didn’t have to go to a printer any longer and have things typeset and drawn up by commercial graphic artists and what have you.  It all seemed so wonderful at the time.  There was no indication whatsoever that this could ultimately become of it.

Caller Aaron:  I do remember that.  Can I make three quick points?

Caller Aaron:  Before I left and I had talked to you before, and I disagreed with you about cutting the military budget.  I’ll say that that budget, at the very least, now needs to be cut by at least 75 percent.  It is just being totally squandered.  Two, to answer your question previously, you were talking to Mr. Gruss about his generation and the Social Security.  I think that’s why this big push for amnesty is on.  They’re trying to get a bunch new taxpayers in because they realize the bank is broke and there’s no way they’re going to fix this.  If they don’t get a rapid infusion of tax base, it’s done.  Three, something dawned on me about this Chris Kyle business, the Boston bombing you talked about.  We were talking about private security.  They had private security contractors working there from Craft international.  That was Chris Kyle, American Sniper.  He wrote a book and that’s the guy that got killed —

Mike:  I remember that.

Caller Aaron:  — about two or three months ago or whatever.  It seems like he got killed and this transpired.  What occurred on all that?  You know what I’m saying?  I know that’s very conspiratorial, but Chris Kyle gets killed and these guys pull security and this event happens and everybody was talking about — there were a couple people at the marathon that said the local authorities were saying there are going to be some drills taking place today.  You can look that up.

Mike:  I’ve actually seen that video, the guy that said he overheard agents talking about: We’re only here to do a drill today.

Caller Aaron:  I think he was from Iowa.

Mike:  All good points.  Aaron, thank you very much.  I appreciate your service out there.  Thanks for the phone call. 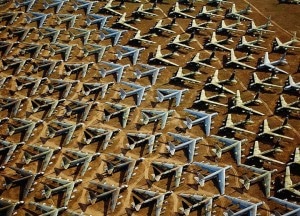