Mandeville, LA – Exclusive Transcript – Folks, if you’re wondering what he’s talking about, here’s what happens.  The borrowing authority is granted by lifting the so-called debt ceiling.  Where does the money come from?  Do you just print it off?  That’s one way that you could do it.  What generally happens is the Treasury Department tells all their buddies on Wall Street: We’re going to issue $110 billion in Treasury notes.  Check out today’s transcript for the rest…

Caller David:  Good morning, Mike, how are you?

Caller David:  It is a beautiful day here in sunny Cleveland, Ohio as the sun comes up.  Unfortunately I feel that the number of sunny days ahead for this country are very limited.  What we witnessed is a legislative body of Republicans and Democrats — we’re on a 747, all together.  As the pilot came on and said they lost all power and was going to take the plane down to 10,000 feet where it would be safe to jump out, everybody said: That’s a good idea, let’s jump.  At the end of the day, we are now faced with what I describe as an implosion of America.  There is no way financially that the United States of America can come out of its debt, nor will have the financial capability by the year 2016 to even pay the interest on the debt.  If you go to the Treasury website, they clearly predict a $20 trillion deficit by 2016.  The debt service today through the 2014 budget is projected to be $395 billion and a blanket interest rate of 2.63 percent.  If you carry forward what our illustrious leaders have just done by raising the debt ceiling to an additional $900 billion, which we know will be spent by the king between now and February —

Caller David:  As Paul Harvey would say: Now for the real truth of the story.  We will probably be at $20 trillion by 2015.  As interest rates go up, and as the world, particularly the Chinese, realize that their investment in America will never be seen, once we hit 4.5 percent interest rate on $20 trillion, we have annual interest of $960 billion a year.  For a government that’s only taking in $2.2, $2.4 trillion, Houston, we got a major problem.  We’ll collapse.

Mike:  You see, our problem though is not as big — the only thing that’s keeping us afloat is that the rest of the world sucks even worse than we do.  The Spaniards and the French and the Portuguese and the Greeks and the Irish and the Japanese — the Japanese are far worse off than we are.  You want to talk about debt to GDP ratios, they’re already where you’re talking about we’re going to be.

Caller David:  The entire world will implode, you’re absolutely correct.  That is why everybody was so afraid of the default possibility.  Once we default, it is a cascade —

Mike:  As Ron Paul used to say, he was basically parroting what he learned from Mises and Hayek and Roepke, and maybe a little bit from Rothbard, what Ron Paul would say about this and what he said the other day is, when you say you can’t operate without borrowing more funds, that is a default.  By definition, that is a default.  That’s a default.  In other words, you can’t even pay the current bills you have without borrowing more money.  You’re in default.  What if the creditor tells you no?  Let’s just imagine for a moment that the world turned its back — of course, they’re not going to because they rely on us and our vast military industrial complex to continue the spending, and our vast agribusiness complex and all the other ones.  What if the creditors of the world say no, we’re not going to give you any more money?  What if you raise the debt ceiling and no one would buy the bonds?  What if they just said: Yeah, you’re not going to sucker me into that.  What would then be the result?  You sound like you know a little bit about this, David, so let’s walk through the process.

Caller David:  That’s happening right now.  In the next twelve months, the Treasury has to refinance, on short-term notes, $2 trillion, on top of the $900 billion that Congress just approved.  That’s $3 trillion of treasuries that have to be refinanced.  If you look at the one-year T-notes right now, they’re up, in the last three months, almost 300 basis points, which is a huge amount.  We’re going to see this rapidly descend upon us in the next 12 to 18 months.

Mike:  I think you would be kidding yourself if you think there’s a way to escape this.  If the president and his cronies, if they want to spike the football in the end zone, their fingerprints are now happily all over the increase in the debt, and all over the monetary base being debased.  If a crash or a correction happens, and it will, then they ought to also get the blame for it.  I don’t want to play the partisan politics game and say it’s going to make me happy, although, for the most part, I do not care and despise the political machinations of progressives.  I’d be happy to see it in that instance.  What he’s saying here is basically correct, folks.  There is a major correction coming.  Even if you try to inflate it away and pay all the debt with funny money, by printing more, there’s no way to avoid a corrective force.

David, this brings up another point.  I saw Russell Kirk, before he died, was writing a little bit about this.  I keep mentioning Irving Babbitt.  Babbitt wrote about this back in the ‘20s.  Tolkien and Lewis wrote about this, too.  That is this hobgoblin, this utopia that Republicans and Democrats alike try to sell to the public.  What is the utopia?  The utopia, which is unattainable — they always are – is [mocking] “We’ve got to get back to growing the middle class.  We’ve gotta get back to having robust economic growth.”  There will come a point in time where you will have exceeded the ability to economically grow.  I’d say that we probably have already crossed that threshold.  It is just silliness to believe that rising tides lift all boats and there’s another tide coming that’s going to lift all the boats.  We’re probably at the apogee, high point, nadir, high point of our gilded age.  What say you?

Caller David:  I agree with that 100 percent.  Here’s the real key in this equation: we have officially been out of the recession since 2010.  We have yet to have GDP growth higher than 2.5 percent.  The ability for this country to produce 20 to 30 million new jobs in the next 18 months is nonexistent.  Even at the 150,000 to 180,000 that the federal government reports, which is a bogus number to begin with —

Caller David:  Even if we maintain that in a 24-month period of time, we’re not even at 2 million jobs.  The ability to collect more taxes — and this is what’s coming next.  This is what everybody is not ready for.  You’re going to have Obama, in 2014, get on at 8 o’clock at night and all the networks are going to cover it.  He’s going to talk to the American people and say: We are going to have to raise your taxes, and here’s why.  He’s going to have the beautiful charts to show all the debt service and that we’re not going to have the ability and we’ll have to raise tax revenue.  We’re going to see the most massive increase in income tax that has ever occurred in this country, which will overnight freeze business.  Business will freak out.  If you look at American business today, with over $2 trillion of cash on their balance sheets, which is basically they’re holding back in case the bottom falls off.  They’re not going to reinvest.  They’re not going to hire.  When you increase the tax revenue rate, not only are prices going to go up and we’re going to have hysterical price increases — it’s like the mouse on the treadmill.  The faster it runs, the more tired it gets and the quicker it dies.  That’s what we’re going to face.

Mike:  David, thank you very much for your august economic rosy scenario.  I feel a lot better.  How about you, Andrew, you feeling pretty good about economic outlook?

AG:  It was terrifying.

Mike:  It’s like we just put on the air the little old guy that’s always walking around towns like Washington all disheveled, hasn’t cut his hair in ten years, hasn’t cut his bear in 15.  His clothes are all tattered and he’s got a rickety piece of wood with a rickety piece of cardboard tacked to it that says “The end is near.”  Is that what you were hearing when you were listening to our last caller?

AG:  That would sum it up pretty nicely. 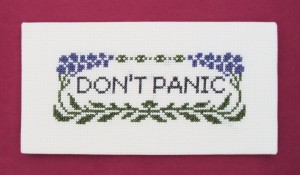