Mandeville, LA – Exclusive Transcript – Now we’re talking about things that really shouldn’t matter.  The purpose of the United States Senate, as I understand it from my old, antiquated, fuddy-duddy, useless study these days of the federal constitution and how it came about, my understanding of it is that the Senate was created so that the little states could not be trounced by the large states, and so that the large states could not form factions and trounce the little states.  Check out today’s transcript for the rest…

Caller Jo:  We’re confused at this house.  We’re conservative independents.  We cannot figure out what either one of these parties stands for.  There used to be a time when you had a convention and a platform committee and you actually had a platform.  I don’t understand what these labels even mean anymore.  I don’t understand why party leadership — and I don’t mean the politicians, I mean the heads of these parties — why do they not say: You’re not allowed to use our label or you are allowed to use our label.  It seems if anybody wants to call themselves anything, they can.

Mike:  Yes, you can.  You can even call yourself a Weiner.

Caller Jo:  We get daily phone calls from the National Republican Senate Committee, because we contribute to conservative candidates but we never contribute to parties.  We just keep telling them every day when they call, calling for money, of course: We don’t know who you are.  How can John McCain and Ted Cruz be in the same party?  If you have a party that McCain and Cruz are upholding the same platform, something is wrong.

Mike:  There’s nothing wrong with a diversity of opinion, I don’t think.  Between Cruz and McCain, they probably aren’t as close as McCain and Graham.  I don’t think Cruz and Paul are as close as people think.  There is a great diversity of opinion.  Now we’re talking about things that really shouldn’t matter.  The purpose of the United States Senate, as I understand it from my old, antiquated, fuddy-duddy, useless study these days of the federal constitution and how it came about, my understanding of it is that the Senate was created so that the little states could not be trounced by the large states, and so that the large states could not form factions and trounce the little states.

The Senate was put into place and the election of senators was designed so that it would generate something.  All of these things had a purpose.  The purpose of the Senate was to control factions and was to see to it that if the House did something kneejerk because there was a popular groundswell among some faction that it ought to be done, then the august members of the Senate, acting under the guidance of other august members of state legislatures, would say no.  They’d consider it and they’d say: How about no?  That’s just a kneejerk reaction.  You’re overreacting.  Besides, you’re acting outside the bounds of the Constitution.  The Senate is supposed to be a check.  A senator is not supposed to be colluding with other senators, regardless of party or state affiliation to make these factions.  To assign party affiliation, and we do, and to assign block voting because of party, and we do, defeats the immediate purpose of why there is a freaking Senate to start with….

Mike:  But Jo, it’s so frustrating.  There are eight people on Earth, me, you, Gutzman, Woods, McClanahan, Livingston that actually understand that.  You have tens of millions of people that are going to go on Blaze.com today and various tea party websites are going to jump up and down and set their hair on fire.  They’re going to do all these things and they’re not going to have one iota of an effect because they don’t understand the principle.  If you understand the principle and if you live and guide yourself by the principle of why there are these particular constructions, as Taylor would have called them, in the federal system and you actually begin to develop and think in terms of those protections and constructions, then I think you have a vastly different situation.  Of course, that would also kneecap or put a very painful and violent end to I’d say about three-quarters of what the Senate and House do in conjunction.  They don’t want to give their power back, so that’s not going to happen.

Caller Jo:  Mike, I’m looking at I guess the larger picture, which is this jumping up in the aisles and celebrating because the Democrats have started to become disillusioned with their president, that does not translate to a vote for Republicans.  We still have the public so entirely confused about what Republicans stand for, or any alternative to Obama is about, or what our plan is.  We have no plan.  We’ve presented no plan.  We’ve presented no unified picture.  I have a great fear that we are going into next year and we will lose the House, let along jumping around celebrating we’re going to take the Senate.  We’ll be lucky if we hold onto the House if we continue this.  The infighting — we’re very lucky in Iowa.  We have Charles Grassley and Steve King and Tom Latham.  Those guys can’t do it alone.

Caller Jo:  Now we’ve got . . . badmouthing Steve King, badmouthing him because he’s taking a strong stand on the amnesty/immigration bill.

Caller Jo:  I get that.  I’m from Iowa.  We want our piece of the pork pie, too.  I get that.  I get those criticisms.  Steve is pretty far right on social issues, further right than we are, but nevertheless, if John Boehner’s got an issue, he needs to call Steve up and not be badmouthing in the press.  That’s my problem with it.  When the party is divided in public, then there’s no allegiance.  There’s no allegiance for us to look up and say there’s leadership.  It’s not leadership when they’re fighting like a bunch of kids at the Delta house in Animal House.  This is crazy.

Mike:  I think there has been a tincture of crazy throughout the history of the House of Representatives.  If you want to sit down and read any year’s worth of proceedings from any Congress, I think you can find your fair share of crazy.

Caller Jo:  There’s too much at stake now.

Mike:  That’s a tempering thing.  You are very wise, madam.

Mike:  That is a great tempering statement.  When Henry Clay was trying to get the Bonus Bill passed and build highways and roads and bridges in 1816 and Madison vetoed the bill, we were talking about an expense of money that probably would equal five seconds’ worth of expenditure in today’s federal leviathan. 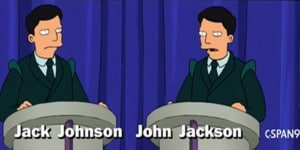