Mandeville, LA – Exclusive Audio and Transcript – Caller Joe thinks that the only people we should vote for are “viable candidates”, people that have been knighted by one of the two parties as a candidate and a vote for anyone else is a waste.  Well, by his own logic, Obama is a viable candidate and people like Gary Johnson and Ron Paul aren’t.  And Joe thinks that Mike’s vote for his good friend, David Simpson, was a waste, even though he gained a life long friend out of it and didn’t vote for the ultimate Republican winner Steve Scalise. Listen to more with Joe and Mike in today’s audio and transcript…

Caller Joe:  Good morning.  How are you doing today, sir?

Caller Joe:  I do not agree with you with your stance on the third party.  I wanted to talk to you about a couple things.  Would you, one, not agree that President Obama could care less about the Constitution?

Mike:  Of course I agree with that.

Caller Joe:  Okay.  Well, if he’s reelected and he has four more years without worrying about being reelected again, he’s going to do what the heck he wants to do.  I can’t see where you’d think voting your conscience, voting for a third-party candidate to try to change things, is going to get us anywhere.  We’re going to go down a slope of which we can never recover from.

Mike:  So you think you can recover from this one?

Caller Joe:  I think that Obama –

Mike:  $16 trillion in the hole, $220 trillion in unfunded liabilities, 38 of 50 states teetering on the edge of bankruptcy and you think you can recover from this?

Caller Joe:  Are you just ready to give up?

Mike:  I think I just eloquently stated what I am ready and what I am working to do, sir, which is not living in a pipe dream fantasy world that an election 22 days hence is going to solve any of these problems.  These problems are mammoth.  Is President Obama a threat to my children’s liberty?  You’re damn skippy he is.  I never said that I supported President Obama or encouraged anyone to vote for him.  You asked me a question about Obama thinking I was going to give you some snide answer, I guess.  Yes, he is a threat, absolutely.  We have three branches, sir.  What is the other branch doing to check the executive branch?  It is their responsibility as well and they are led by Governor Romney’s party.  What are they doing to check the executive?

Caller Joe:  Let me respond to that.  I totally agree with you.  I think one of the things we have to do is get conservatives in the Senate and Congress and hold their feet to the fire.

Caller Joe:  I’m not a political expert on this, but I vote individually on each congressman.  I’m looking for conservative people to hold the Constitution.  If they don’t, we need to hold their feet to the fire.

Mike:  We had a caller about this last week.  Using your theory that you just enunciated right here on these radio airwaves to me, I am now looking for the Tea Party revolt against John Boehner’s reelection.  It is Boehner that has failed.  If you’ll agree with me on that, then you are at least taking matters into your own hands as it applies to what you can currently do to check the executive.  I have news for you.  If history is any guide, if elected, Governor Romney is going to act upon the tyrannies and the perversions that have been visited upon the constitutional restrictions of the executive branch.  I dare say that Boehner-led Congress is not going to do anything about it.  I think, again, while President Obama is certainly a threat to people’s continued liberties, I do not view the other choice as also not being a threat.  What am I to do?  I’m to decide which of the threats is least attractive.  To me, Governor Johnson does not threaten me.  To many people, Johnson does not threaten them in the manner in which I just described.  So are you saying that in good conscience people should not choose what they believe to be the least-threatening option?

Caller Joe:  Think your scenario through.  If you do go and vote for Johnson, do you think he has a realistic chance of winning?

Mike:  Not if people keep calling radio shows calling him a third-party loser, no.

Caller Joe:  At this point in time, a third-party candidate is not a viable option.

Mike:  I voted against Steve Scalise in 2008 and I voted for David Simpson, who had no chance to win whatsoever.  You know what I got out of that?  I got a lifelong friend.  I got a lifelong friend, advisor, confidant, someone that I love like a brother.  Did I make a fool’s choice in voting for David Simpson and not voting for the ultimate Republican winner Steve Scalise, sir?

Mike:  How did I make a mistake?

Caller Joe:  That person was not a viable candidate and they cannot win.

Caller Joe:  Somebody that can realistically win.

Caller Joe:  He is a viable candidate, but he’s a major threat to our Constitution.

Mike:  So what?  He’s a viable candidate.  He can win.  As a matter of fact, he did win one time.  You can make the argument that the things that have been visited on the Constitution by President Obama have been sanctioned by 53 percent of the people.  They wanted it.  They majority got their way.  They got ObamaCare, Solyndra, all the other things that went with it.  Joe, I’ve got to run because we’re out of time.  This was a thrilling conversation.  Thank you very much. 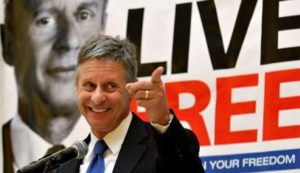 0Shares
Boehnerdavid simpsonGary JohnsonObamaromneysteve scalise
Previous PostAre Johnson Voters Guilty of Electing Obama?Next PostThere is No Salvation To Be Delivered By Romney or Obama, Obsessing Over Them Is Making It Worse