Mandeville, LA – Exclusive Transcript – So Harry Reid, Barack Obama and all of those steely-eyed statesmen who are not going to give into this blackmail by this Republican Party that controls the House of Representin’ are now exacting financial and physical and mental harm on those that ordinarily would make their living selling and marketing services that have something to do with a national park.  I got a question for those of you in Florida: When are you going to take back your seashore?  Kick these tyrants out.  Tell them to go home.  Check out today’s transcript for the rest…

Mike:  I often ask the question of my friends and my fishing buddies here in southeast Louisiana, we have lots of waterways here.  This place is known as sportsman’s paradise.  It’s on some of our license plates still here in Louisiana.  It is known as a great place to fish, a great place, now that we’re in October and November and early December, to hunt ducks, all kinds of ducks, little gray ducks, teal ducks, dogrie as they’re called around here.  We have the flyover season and mallards and other species of duck to be hunted.  There are a couple of places around here that are said to be national wildlife refuges.

Who determined you had any dominion over the land and can make something like one of the places here, Big Branch?  How could you make Big Branch a national wildlife refuge?  Why would you want to?  This is an inland waterway.  This thing runs right inside a town called Lacombe, Louisiana.  I’m just making an analogy here.  Why would you want that to be a national wildlife refuge?  That means someone other than the people who live there or the citizens of the State of Louisiana, whose property it actually is, someone else is claiming dominion over it.   Why would you do such a thing, for what purpose?  Oh, that’s right, free money, I forgot.  Back to the story of what’s happening in Florida.

The refuge and the waters are closed because of the shutdown.

We know you can close a gate on a park, but how do you close off the water?

“It’s for fishing. If you’re not coming here to fish, there’s not much more to do, but fishing, whether it be shell fishing or line fishing or whatever,” Dewees said.

His phone has been ringing all week long, but with the Lagoon pretty much shut down, they aren’t good calls.

“It’s been ringing for people canceling. Yeah, it’s not been good at all. I have no cabins rented out this weekend and I’m usually full every weekend for fishermen and there’s just none.”

Mike:  So Harry Reid, Barack Obama and all of those steely-eyed statesmen who are not going to give into this blackmail by this Republican Party that controls the House of Representin’ are now exacting financial and physical and mental harm on those that ordinarily would make their living selling and marketing services that have something to do with a national park.  I got a question for those of you in Florida: When are you going to take back your seashore?  Kick these tyrants out.  Tell them to go home.

The legislature convenes a special session.  Governor Rick Scott ought to get involved in this.  You people in Florida ought to demand this.  You ought to say: If you’re going to try to shut our waterway down because you guys can’t make an agreement in your silly little Mordor on the Potomac River, guess what?  We don’t want you running our little waterway anymore.  We’re going to take it back.  If it has to be managed by government, we’ll run it ourselves.  Of course, [mocking] “You do that, we’ll cut highway funds off from you.”  Gee willikers, how will we ever build all these highways?  Wait, we already have highways we’ve built.  Here’s the best part of the story from central Florida and from Channel 9 News in Tampa:

Jane Whaley, a supervisory wildlife officer with the U.S. Fish and Wildlife Office said the waters of Mosquito Lagoon south of Oak Hill are part of the Merritt Island National Wildlife Refuge, and as such, are included in the government shutdown. [Mike: Again, Florida, what are you going to do about this?]

If you’re caught in the federal waters, you’ll be asked to leave.

Refuse the order and you could be cited.

Mike:  How many of you are near enough to the Mosquito Lagoon that would like to participate in an act of civil disobedience today?  See if all these allegedly laid-off park rangers can chase or track all of you down and can serve you with some manner of citation.  The legislature could intervene, like I was begging the Louisiana legislature to intervene after the BP oil spill, and tell the federales, especially when we were dealing with inland Louisiana waters, that if you try and stop anyone that is affiliated with this state or claims to be a property owner from accessing their land or doing anything to it, we will have you arrested, Coast Guard or national wildlife park managers or ranger or whatever you are.  This is Louisiana territory, Louisiana waters.  The same case can be made for Florida waters.

By the way, it is traditionally known under the Law of Nations that a traditional, sovereign water space was about three leagues off the coast, extending out into the water, of any sovereign territory.  Three leagues is approximately — yes, nautical people, I know it’s not exact — ten miles.  I haven’t been to the Merritt Island National Seashore, but from the way it’s described, it sounds to me like it’s within the ten miles.  That is your property.  That is the property of the sovereign State of Florida.  That’s not federal property and shouldn’t be federal property.  I often wonder how these things happen.  If you dare to cross the almighty federal overlords and happen out into Mosquito Lagoon in central Florida, a park ranger may greet you with a citation.  Listen to the rest of the story:

We contacted a number of local guides who make their living fishing in Mosquito Lagoon. No one wanted to go on camera for fear of reprisals.

Mike:  You fear, Ranger Rick and the Merritt Island National Seashore kind, gentle, benevolent, beneficent managers of a federal national wildlife refuge waterway?  What kind of reprisals could you possibly fear?  Will the IRS all of a sudden start looking into your tax filing?  Look at the bright side, not many of them are actually reporting to work, so you might get away with it for the first week or so.  What is it that these men, I assume most of them are men, would fear?  Our magisterial federal government is our buddy, our friend.  It’s like Bill Murray said of Warren Oates in the movie Stripes.  Our national wildlife refuge park services, they’re our big toe.  They’re our buddies, our helpers.

However, they all fell into two distinct camps: those who will just fish to the north, and then those who will keep fishing the lagoon, daring law enforcement to catch them.

Lee Adler goes over a couple times a week from Lake Mary to fish the area.

He said you couldn’t tell the waters were closed today.

“I saw half a dozen boats out there. So I guess either other people aren’t informed or they’re just ignoring that closure.” [Mike: Good for you. You should all ignore it.]

Also in our area, the St. Johns and Lake Woodruff National Wildlife Refuges were closed.

Mike:  I’m going to have to do a little crack constitutional research into this and find out how a place becomes a “national wildlife refuge.”  Who asks for this designation?  Does the state ask?  As I said, there’s one right down the street from where I’m at right now.  Do the federales come in and say [mocking] “We’ve discovered some things we think we should be micromanaging.  We’re declaring this from latitude X to longitude X.  That’s our property.” 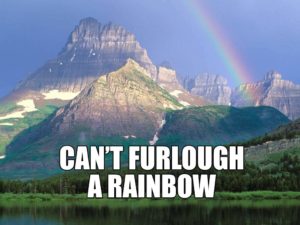