Mandeville, LA – Exclusive Transcript – You people all proceed from the point of view that this isn’t God’s planet.  This is God’s planet.  If he wants it to warm, it’s going to warm and it’s going to boil and there’s not a damn thing you can do about it.  This is part of our arrogance and our conceit in this era.  Check out today’s transcript for the rest…

Mike:  This is Chad in Michigan.  Hello, Chad.  How you doing?

Caller Chad:  I like you the best on your station.  I normally listen to POTUS, but you’re probably the only reason why I tune this station over here and there.

Caller Chad:  I just wanted to comment a little bit.  I found one of your statements regarding climate change to be a little bit strange.  You said you think because we only occupy a certain amount of the planet that we don’t have the capacity to influence the weather.  Actually, man is the only creature on this Earth that has the capacity to destroy itself.  There have been many times when it’s been close to that.  I think that part of this climate change argument is not just about the U.S.  It’s also about the fact that the population is growing rapidly.  You’ve got China and India spewing a ton of stuff into the atmosphere.  I disagree with you a lot in saying we don’t have the capacity to make it so that we make the planet hotter.  Power plants, what is wrong with recommending —

Mike:  That’s your opinion, Chad, and you’re entitled to it, but you’re not entitled to your own facts.  Where is the proof?

Caller Chad:  They’ve been debating it forever.  There’s no clear, conclusive evidence that we’re not influencing climate change on the Earth.

Mike:  There’s no conclusive evidence either that anyone will ever see a black hole.

Mike:  You might see a sinkhole. That’s not a black hole.  You’re telling me that I’m supposed to believe something simply because you say that it is, or simply because some scientist with a political agenda — scientists are not politicians.  You do not enter into a hypothetical in a scientific experiment with a preconceived notion of what it is you want to prove so that you can then take that to a politician, which is what the IPCC does and is doing.  A scientist shouldn’t really what the care of his outcome is because he’s there to learn what happens when said experiment is actually inaugurated or executed.  That’s what a scientist does.  He may find out: I was expecting but bada bing, bada boom, shazam, B happened.

That’s not how the climate science discovery and due diligence is going on. Everything is being done within the power of man to try and substantiate and prove what you just said.  The United Nations, by its own admission, their own models they told us in 2001, 2002 and 2003 that if we didn’t do something about their own models said we would be in an oven roaster right now, that the seas would be boiling.  We’d have two and three degree centigrade increase in temperature.  Not only has it not happened, the GISS satellite system says that the planet has actually cooled almost a degree centigrade in the last decade.  Obviously the methodology and the alchemy is incorrect.

Caller Chad:  The precision is not going to be 10, 20 years.  The problem is it could be a precision of 50 years.  Once you have all that stuff up there, it takes a lot longer to chill it.  What are you going to do, shut off all the power plants on the Earth when you realize we screwed up?

Mike:  You know what you need to do?  Here’s a little experiment you should engage in, sir.  You’re in Michigan.  What part of Michigan are you in?

Caller Chad:  Well, 30, 40 miles outside Detroit in the suburbs.

Mike:  Do this little thought experiment, Chad old buddy.  30,000 years ago, right where your carcass is planted, there was a one-mile-thick sheet of ice.  It left a big hold in the ground, that thing you call Lake Michigan.  Thank God that you and others weren’t around to stop the global warming that melted the damn ice so you can have a terrestrial home.  Your response?

Caller Chad:  I would agree that that was a natural occurrence, but there weren’t any —

Mike:  You’re right, there couldn’t have been terrestrial life back then because it was frozen.  Let’s reverse the process then, Chad.  Let’s shut every fossil-generating plant down on Earth.  You know what else you’re going to have to do, Chad, old buddy?  You’re going to have to figure out how to cap those volcanoes.  The next question is, how are you going to stop Mount Pinatubo?  How are you going to stop Mount St. Helens?  How are you going to stop that volcano down in Mexico that’s belching hundreds of millions of metric tons of carbon dioxide and sulfur dioxide into the atmosphere right now as you and I speak?  How are you going to stop that?  The fact of the matter is that you can’t.  So yes, a human insect is inconsequential to the grand global climate scheme.  Can you have a very localized, ephemeral, short-term effect on something?  I suppose that you can.  We can also alter the course of mighty rivers.  We can also alter the course of where certain land masses move, slightly.  We cannot stop it and we cannot control it.  Even if we could, you are far better off living on a warmer planet by two or three degrees than you are living in an ice age.

Caller Chad:  That’s agreed, but I’m not far better off living on a planet where you have more violent storms and methane coming up —

Mike:  There is absolutely no proof whatsoever that we have more violent storms today.  Where could you possibly get the proof that 10,000 years ago there weren’t hurricanes and tornadoes and lightning storms ravaging the planet?

Caller Chad:  What do you have against putting less pollution in the air?

Mike:  If carbon dioxide is a pollutant, why don’t we just kill ourselves now?  You’re a pollutant.

Caller Chad:  There’s a lot more stuff than carbon dioxide coming out of power plants. There are a lot of harmful materials.  You cannot disagree that people that live next to power plants —

Caller Chad:  It’s not that easy for everyone.

Mike:  So your life is not worth moving.  That’s not the easy.  That’s interesting, Chad.

Caller Chad:  I don’t live next to a power plant.  I’m good.  I’m just saying I care a little bit more about other people than just myself.

Mike:  I care about other people, too.  Last time I checked, when I go to a hospital, they need electricity to jumpstart my heart.  Last time I checked, when I got to a hospital and they need to put me on a respirator, there’s not some guy sitting there on a bicycle turning the turbines so that the respirator will work.  Either you want to live in a modern environment where you have the conveniences of electricity and all the benefits that we get from it, or you want to live in a Byzantine era.  We can go back to boiling oil.  We can try steam turbines if you like, although you have to burn wood and coal to do that, too.  That’s basically what a coal-fired generating plant does anyway.  There are three or four billion people on the planet, Chad.  Perhaps it would be in the interest of the planet if we would just indiscriminately choose some people that shouldn’t be here and just drop neutron bombs around them.  That way no CO2, no global warming, problem solved.

Caller Chad:  It’ll be close to seven billion people in 2050.

Caller Chad:  What I’m saying is —

Mike:  It’s a scourge upon the earth.  Let’s get rid of them.

Caller Chad:  I don’t think people are against coal-powered plants at all.  It’s about let’s make them a little bit cleaner.  There’s nothing wrong with that.  You look at China which has no regulations.  Go live in Beijing.  They’re pumping all kinds of pollutants in the air —

Founders TV – Climate Change We Can Believe In

Mike:  No, they don’t need to be, Chad.  By the way, there’s always volcanic activity.  It may not be a Mt. Pinatubo.  There’s always volcanic activity.  You get anywhere near any one of those craters, don’t try to fly over it if you’re Superman because it’ll probably kill you.  The volcanoes are constant.  It never stops.  They are constantly belching all that crap into the atmosphere that you’re talking about.  Does it contain methane?  You’re damn skippy it does.  Does it have sulfur dioxide in it?  Yes, it does.  It has all those noxious, terrible gases that you just cited the coal-fired generating plant, if you put all of them together and ran them all for 100 years, they would not equal not one Mount St. Helens, not one.  Mount St. Helens, if it erupted after you and your buddies got your way and you shut all the coal-fired plants down, would have undone all of your work plus 99 years.  That’s the fact, Jack.

Caller Chad:  I might want to live to be 92.  I would say let’s see.  The science community is going to win out over the conservative community.

Mike:  Did I ever say — as a matter of fact, I was the one lecturing you on the actual science of this stuff.  Have you ever studied how Earth, which has had hundreds of ice ages over the last billion years or so, have you ever studied how these ice ages occur and then how we come out of them?  That’s science.  Look it up.  Obliquity, precession, and eccentricity of the Earth’s orbit will cause it.  What do you propose to do about that?  What happens if we get pushed in another 100,000 miles, Chad?  What are you going to do about that?  You want to talk about climate change, man, if the Earth were to deviate, just deviate 10,000 miles in the wrong direction, all of your little plans would go out the window.  The only concession that I will make and that would agree with what you’re talking about is it is probably not a smart thing to locate human population centers near where coal is being burned to generate electricity.  I think we can deal with that.  I don’t think we need the United Nations and some cabal of wealth-transferring, red communist, alleged scientists to accomplish it either.

You people all proceed from the point of view that this isn’t God’s planet.  This is God’s planet.  If he wants it to warm, it’s going to warm and it’s going to boil and there’s not a damn thing you can do about it.  This is part of our arrogance and our conceit in this era.  [mocking] “Yeah, we can stop it.”  Really?  You can?  What happens if you stop it too much, genius?  What if that were actually possible and you stop too much of it?  Then you’re in an ice age.  Congratulations, Chad.  Your home in Detroit is now under 500 million metric tons of glacier ice. 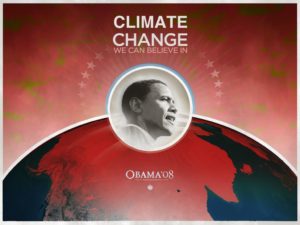