Mike:  What happened is, there’s a bunch of people out there in Nevada that are sick and tired of being bullied around by the federales.  They’re sick and tired of being told that the federal government is supreme.  They’re sick and tired of being told that they’ve got to buy health insurance.  They’re just sick and tired, they’ve had it, and now you want to come and take Cliven Bundy, of all people’s, property.  The family has been here since the 1880s, sir.  How long have you been here?  That’s it.  No one had any weapons other than smartphones to capture the action, yet there were Tasers that were drawn.  Some cops are out there going, [mocking] “Mike, you don’t understand.  People are dangerous.  You gotta protect yourself if you’re law enforcement.  They were just following orders.”  Yeah, I understand they were following orders.  And you know what the ranchers were doing?  They were acting as patriots.  I’m using the textbook definition of patriot, coming from the Latin patria, meaning homeland.  They were trying to defend what they viewed to be their homeland.  It is a noble and virtuous pursuit.

I don’t know all the legalities of it, but as near as I can tell and ascertain from the meager amount of research I’ve put into it, which is superior to the research that anyone else in broadcasting has put into it, the ranchers have a pretty good case.  And the State of Nevada has a pretty good case.  This is what’s bothering me.  Where in the hell is the State of Nevada?  Why isn’t the State of Nevada fighting this?  It’s their property.  Once they joined as a state — the only way this happens is with the consent — the only way federal land would remain in the state like that, as I understand it, is if Nevada consented to it.  Why would you consent to this?  This is part of this allure that people used to be so desperate to get into the American Union.  [mocking] “We’ll sign anything.  You want title and deed?  You want the key to the property?  You can have it.  We don’t want it.  Just let us in the Union,” which was probably not a very smart thing to do.

In the process of having a land dispute, you have people that have become, over years, perhaps decades, maybe even a century, agitated, angry and dissatisfied with their current political arrangements.  What they’re basically doing by kicking the BLM out is they’re kicking the U.S. government out.  They’re saying: Back off!

What is at issue here, I think, and what you’re seeing here is a reconsideration of what?  What would the agreement that would have been made between the former territory squatters, now citizens of a state and the general government, what do we call this in constitutional terms?  Those of you that have read Is Davis a Traitor; or, Was secession a constitutional right previous to the war of 1861?, you know the answer to this question.  The word starts with a c and ends with a T, compact.  They basically made a compact.  Question: Can compacts be broken?  The answer is yes.  The two parties could decide mutually to either alter or to sever the compact.

Here’s where it can get kind of dangerous or dicey here.  What if the federales, what if Obama says, [mocking] “You’re breaking a compact.  You wanna break it?  Fine.  Taking all the property back that belongs to the federal government.  We’re gonna declare this as Obama territory.  We’re gonna protect tortoises and angry ugly women here.  I have a camp out there for Hillary’s friends.  Anyone that tries to come in will be trespassing on federal land and we’ll drone bomb you back to the stone ages.”  If you were to do this, and I suppose an overreaching president or executive or Congress could say: That’s not your land, it’s ours.  But the point of the matter is that the citizenry there is not going to allow, not at this juncture anyways, the federal government to come in under the guise of protecting some stupid tortoise that everyone that lives nearby knows is not in danger or jeopardy and confiscate the land and grab the land for a bunch of environmentalists as some sort of a payback.  They smell the corruption here and they’re not going to give into it.

Any way you look at this — [mocking] “Mike, are you condoning civil unrest and civil disobedience?”  Far be it from me to condone anything of the sort.  I’m simply reporting and analyzing what it is that we have as news on this today.  Any way you look at it, what you have here is a classic case of a land dispute.  In the process of having a land dispute, you have people that have become, over years, perhaps decades, maybe even a century, agitated, angry and dissatisfied with their current political arrangements.  What they’re basically doing by kicking the BLM out is they’re kicking the U.S. government out.  They’re saying: Back off!  How far do you take the back off?

Mike:  You have other areas in the Great Plains states and around that area that are experiencing similar difficulties with environmentalists and with the Obama administration claiming they have some kind of claim over land that just happens to have oil on it.  In all these instances, in every one of these instances, you have pitted Goliath vs. David, David being the citizen and Goliath being the federal government.  It’s not a far distance to travel to help convert the Davids into republicans and to help them understand that the power is in their hands to alter the course of history here.

Some of you might be thinking: Well, if you could just get the Feds to back down, wouldn’t you claim that a victory?  Well, would they back down only to return on another day, or would they back down permanently, have some kind of a meeting with the governor and legislature of Nevada and other states facing similar property and land grabs, and resolve the issue?  I don’t think the latter is going to happen.  What alternative does that leave?  Interesting to think about, isn’t it?

I pulled this from The Heritage Foundation website.  I was browsing around looking for legal opinions on territories and how land disputes in territories residing inside of American states, how they had been adjudicated in the past.  I found this, which is not totally satisfactory, but it does answer some of the question. 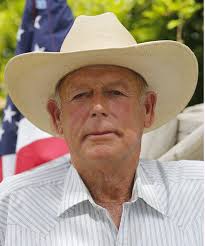 The primary constitutional authority for the management and control of this vast real-estate empire is [Mike: He’s talking about American territories.] is the Property Clause. The exact scope of this clause has long been a matter of debate. Broadly speaking, three different theories have been advanced.

The narrowest conception, which can be called the proprietary theory, maintains that the Property Clause simply allows Congress to act as an ordinary owner of land. It can set policy regarding whether such lands will be sold or retained and, if they are retained, who may enter these lands and for what purposes. Under this conception, the clause confers no political sovereignty over federal landholdings. Unless one of the enumerated powers of Article I applies, such as the power to raise armies or establish a post office, political sovereignty over federal lands remains with the several states in which the land is located.

Mike:  I would say that is probably the closest that we’re going to get in 2014 of what is at stake here.  The sovereignty then belongs to the State and the people of Nevada.  That would mean then that the governor of Nevada and the legislature of Nevada and the sheriff of that particular county, that they’re the ones that should have been there with the citizens trying to adjudicate the decision in favor of the sovereign people of Nevada.