Mike:  Big story today is Boehner is ready to cave.  This is coming from the New York Times today, probably reported late yesterday afternoon, “Boehner tells Republicans he won’t let the nation default.”  Can I just be one of the few sane voices out here?  The country is not going to default.  It can’t default.  It is not going to not make its interest payments.  Besides, many of the interest payments are due to what entity?  All this money, all the debt you’re hearing about that has to be repaid and whatnot, all of this is not going to China.  The Chinese don’t own all of this debt.  I know that’s the popular point of view.  Last I checked, they owned about $3 trillion worth of it.  They don’t own all the debt, yet we’re told they do.  Much of the debt is owned by actual Americans and some of it is owned by the Federal Reserve itself.  The idea here that we’re going to default and these nameless, faceless investors are going to take this huge hit is, I think, ridiculous.

If you have to appropriate the money to avoid the default, then Congress could then appropriate the money.  Let’s just say the individual appropriations bills are going to come down in the same way that the other individual appropriations that have been making their way over to the Senate and the Senate is saying no, so it’s the Senate that is guilty of shutting the government down.  The House is trying to fund things.  I brought this up yesterday, and I’ll bring it up again in case you missed this.  The way the House of Representin’ is sending appropriations bills over to the Senate is, in my humble estimation, the actual constitutional method that they are supposed to use.

You’ve got to remember, folks, the omnibus reconciliation acts of the past, these were all created by recent congresses.  Prior to Congress creating the omnibus reconciliation, it’s just a lazy way to say we’ve got $3.7 trillion.  Just put it in one giant package, up or down, yes or no.  How do you think the line-item veto became an issue?  How did the United States and Congress exist for a little over 200 years before anyone even dreamed the idea up of a line-item veto?  Why was a line-item veto even necessary?  I can flesh this out in a manner that everyone can understand it.  Most of you have heard of this thing called a line-item veto.  As a matter of fact, the Gingrich congress passed it.  They passed it.

I think the line-item veto is, number one, unnecessary if you’re actually following the constitutional order and process of how you get a piece of legislation through, which is each appropriation is individual.  Let’s say you’re in Connecticut.  A member of Congress says: We need saltpeter for the plows in Connecticut.  This is a federal issue.  It’s part of the federal highway system that has to be maintained, so we need the saltpeter to put on the roads to get rid of the ice.  So a member of the House of Representin’ from Connecticut would put the bill out there: I was going to say we needed $1.2 million for the salt, but my district ain’t doing so good this year.  We need to hire a few extra saltpeter putter on the roader guys.  Even though we don’t really need them, we can afford it.  Call it $2.4 million.  Give us $2.4 million for the salt.  Then he’ll put the appropriation in, cite some enumerated power, probably post roads and bridges or something stupid like that, which is not an excuse to fund roadway improvements (see James Madison’s veto of the Bonus Bill; see James Monroe’s veto of the Cumberland Highway Repair Act).  This is how we know the feds are not supposed to be doing roads and bridges.

So the member of Congress would put that up for a vote.  If it passed the House, it would then go to the Senate.  The Senate can concur or add amendments to it.  You may have a senator going: Hey, would you guys mind if I tacked on another $5 million for my state?  Then another member of the Senate goes: Hey, can I get in on this?  Can we get $2 million?  I’ve got some guys over here that can use some salt contracting, too.  There would be this individual appropriation, and now you see amendments added to it, but just pretend that didn’t happen.  Let’s just say the Senate concurred.  They would then send that to the president and the president would say yea or nay.  If he said nay, he would veto it.  He’d send the bill back with the veto message of his objection, just like the Constitution says.

What I’m describing to you is the proper process for laws from the Congress to become law.  You may notice here that there is nothing about ganging all these things together and then sending them over as one ginormous omnibus reconciliation bill.  This is the way business used to be done.  With the House of Representin’, for example, yesterday they did fund Veterans Affairs.  I don’t have the list in front of me but there are several appropriations.  They sent them right over to the Senate.  What is Harry Reid and the Dumbocrats in the Senate say?  Dead on arrival.  [mocking] “We’re not gonna pass these bills with a gun to our head.”  What do you mean you’re not going to pass these bills with a gun to your head?  This is the way you guys are supposed to do it.

The circle that I’m making here to come back to is, the only way the United States defaults on its debt is if the Boehner side of the Congress sends an appropriation over — all bills for raising revenue originate in the House — that calls for funds to be appropriated to pay the interest on the debt.  It’s pretty simple.  The only way we default is if the Senate says no.   The Senate would say no because Obama would be sitting there saying [mocking] “I’m not gonna sign it, not gonna do it.”  This would all then be on the president and the Senate.

If I’m John Boehner or I’m in that caucus over there and I’m a member of a “conservative” caucus like Louis Gohmert and Justin Amash and Thomas Massie and some others that are actual fiscal conservatives and take their oath of office very seriously, I would be telling my fellow members of Congress: There is no reason for us to capitulate on this.  There is no reason to give in on the effort to deny the previous Congress’s subterfuge and the damage and violence they have done to the Constitution and they’re about to do to the country.  This business about unleashing Obamacare on the populous so that it wreaks its havoc is macabre.  AG, I think you mentioned Ben Stein had said: I think Republicans ought to just let it go out there and pass.  It’s going to be so disastrous for the country, it’ll crumble under its own weight.  It was something like that, right?

Mike:  It’s a popular point of view.  I just don’t agree with it.  Why would you want the damage to occur?  If you can prevent the damage from occurring, I think you should always err on the side of caution. 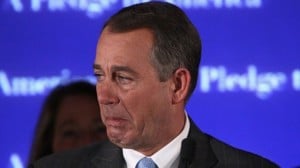 Well. we are doomed to default sooner or later.

Clowns to the left, jokers to the right. Here I am, stuck in the middle with $126T in entitlements owed and $17T in FedDebt.

Indeed, professor, indeed. One might argue that we are already in default by running 13 consecutive “deficits” with no intent or ability to repay the debt they were financed by, right?