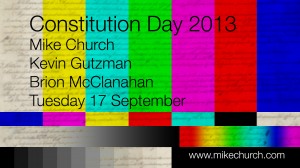 Mandeville, LA – Mike Church’s daily Pile of Prep, chock full of Mike’s Constitution Day history, analysis and fun plus other [r]epublican stories used to perform the Mike Church Show on Sirius/XM Patriot channel 125. “I readily and, I trust, feelingly acknowledge the duty incumbent on us all as men and citizens, and as among the highest and holiest of our duties, to provide for those who, in the mysterious order of Providence, are subject to want and to disease of body or mind; but I can not find any authority in the Constitution for making the Federal Government the great almoner of public charity throughout the United States. To do so would, in my judgment, be contrary to the letter and spirit of the Constitution and subversive of the whole theory upon which the Union of these States is founded. And if it were admissible to contemplate the exercise of this power for any object whatever, I can not avoid the belief that it would in the end be prejudicial rather than beneficial in the noble offices of charity to have the charge of them transferred from the States to the Federal Government. Are we not too prone to forget that the Federal Union is the creature of the States, not they of the Federal Union?” – President Franklin Pierce’s veto of the “Insane Indigent Land Grant” bill

This site is SOLELY supported by your Founders Tradin Post purchases and Founders Pass site memberships, won’t you signup for a Founders Pass or browse the store for T-shirts, DVDs & CDs today?!

Has George Will actually converted or evolved into a “libertarian” or is he just another confused, big government idealist who like government but just doesn’t like OUR government, currently consecrated?

Does a military commander, subordinate to the civilian authority under our constitution, surrender his DUTY to object to an unconstitutional and misguided mission? Let’s all let General Martin Dempsey know he is doing the right thing

OUTRAGEOUS: Our Dear Leader gives a progress report on his “economic recovery” and makes it sound as though we are living in a gilded paradise; debt & obligation free, 95% employed, all enjoy free college and health care et cetera

One more promise to make martyrs of Christians in Syria, for the record, from our new allies, “the rebels”

The treason is official: Obama OK’s sending chemical weapons suits to “rebels”, the beheading jihadi’s in Syria aka our new buddies and allies (just ask a U.S. Senator!)

Will anyone connect the dots between the Navy Yard shooter, Aaron Alexis’s background in combat against “terrorists” and his “blackout” to the recently convicted Robert Bales who killed 16 Afghani civis in “cold blood”

Just because you HAVE a Twitter account doesn’t mean you have to use it. “Tweeters” take to “the ‘net” to complain about the Indian heritage of the new Miss America who I would say is far more demure (there’s that word!) e.g. than the bombastic Miss Kansas