Mandeville, LA – Exclusive Transcript – “So today we have this situation.  Six days ago a madman goes onto this campus of a community college in Oregon and executes ten people, nine.  Some of those he executed, he asks whether or not they’re Christians, and if they are, then he shoots them in the head.  I was talking about this, and, of course, you know I got pushback on this.”  Check out today’s transcript for the rest….

Mike:  . . . but if you’re actually trying to pursue truth, and then to use the truth as knowledge, and then use the knowledge to gain wisdom, that’s not the avenue to go.  Let’s just take one example.

David Simpson:  It’s got to be put in context, right?

Mike:  It has to be put in context.  Let’s put it in context.  So today we have this situation.  Six days ago a madman goes onto this campus of a community college in Oregon and executes ten people, nine.  Some of those he executed, he asks whether or not they’re Christians, and if they are, then he shoots them in the head.  I was talking about this, and, of course, you know I got pushback on this.  I said: The first one that raised their hand when he said, “In about a second you’re going to go meet your God,” and he shot them in the head, the other witness accounts say the other two did not lower their hands.  If they didn’t lower their hands, then that’s witness in the face of death for the faith.  That’s martyrdom.  There’s one way that martyrdom, and it’s automatic, entre vous into Heaven.  Of course, you know I got pushback against this.  Why someone would find that offensive . . .

Simpson:  What was the pushback?

Mike:  [mocking] “That’s just your stupid little Catholic definition of martyrdom.  That’s not real martyrdom and that doesn’t work all the time.  You don’t know this.”  Why, dude?  Just to make an example or to point this out, this is a universal truth here.  This is demonstrable in the biblical record.  Someone may be going, [mocking] “There he goes again.  You gotta bring this up.”  No, I’m going to answer these two gentlemen’s criticism.  The one that decided he was not going to deny the divinity of the one that was being crucified next to him is an example here of instant martyrdom.  There are other examples.  Of course, that would be the example of your son, St. Stephen, and the stoning, and the gospel account of St. Stephen being stoned.  The point is that the pride of being your own pope and having your own papacy makes so many people reject clear thinking on these things that would be to your benefit.  It’s not to your detriment; it’s to your benefit.

Simpson:  That’s one of the first things we start off with in logic.  We’re going to start defining terms.  You’re just defining martyrdom.  All you did was define a word.  How is that offensive?

Simpson:  It either is that thing or it is not that thing, right?  This isn’t something I would find argumentation about.  I’d say: Let me go look it up myself and see if that’s what it means.

Mike:  We have it on good early Christian authorities that all twelve apostles suffered martyrdom.  There was a crank in the middle of the 5th century that tried to deny one.  That’s what made the statement necessary.  I don’t recall who it was that wrote about this.  Note that we can footnote all these things, too.  This is what caused this to be discussed, and that would be for the definition then, let’s write this down.  They were trying to kill St. John the Evangelist.  They tried to kill him.  They put him in a pot of boiling oil.  He was like in the story of Daniel in Nebuchadnezzar when they threw him into the oven.  It didn’t work. 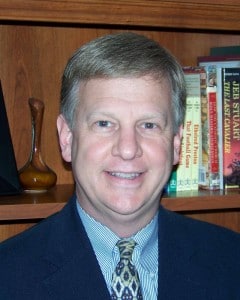 Simpson:  He had something you have to do, which is give his revelation, the last book of the Bible.  He had a vision and that still had to be transmitted.  It hadn’t been transmitted yet, so God’s not going to let anybody die who needs to live a little bit longer and do something.

Mike:  In our philosophia perennis course when Brother Francis says that’s a universal, that is all the apostles suffered martyrdom.  You can’t even say that in ‘Murica in 2015 without getting in an argument.  That was my point when we started talking about: Why do we need to re-learn how to think or go back in time to where people were trained to think correctly to pursue the truth?  The other beauty about pursuing the truth is, [mocking] “That’s just your opinion.”  No, dude, it’s not my truth.

Simpson:  That’s an important point.  The point that always gets brought up whenever I get in arguments — and I try to avoid most of them these days because they’re so fruitless — I noticed through a series of years why the arguments were always devolving into nonsensical messes.  The answer is that we didn’t start off with a premise.  The premise has to be that there is a truth.  There is such a thing as the idea of truth.  I remember I had this one argument with a guy — actually he sent me an email, three pages long, with question after question after question from the debate we’d had a night or so before.

Mike:  He sounds like Descartes: The only thing that I’m not doubtful about is that I can doubt.

Simpson:  Right.  I read the letter.  I knew it was going to be a 20-hour project of research and writing.  I said: I’m going to short change this.  I wrote him back a one-question response.  I said: You tell me what your definition of the truth is and I will then answer all your questions if it’s the real definition.

Simpson:  He cursed me out.

Mike:  Of course he did.

Simpson:  Why are you accusing me of blah, blah, blah.  He didn’t want to tame his mind to say: I will accept what a word means and I will reject what it doesn’t mean.  If you don’t know what the definition of truth is, how are you ever going to hit the target?  If you can’t aim for something, how are you going to hit it?

Mike:  Conformity of the mind to reality.

Simpson:  What’s odd is, after that incident, a day or so later, I’m sitting at the breakfast table with my kids.  My son might have been six.  I don’t know how old he was at the time.  Matter of fact, he might have been younger than that.  I said: I’m just going to try this on for size.  This adult human being wouldn’t answer: What is truth?  I’m sitting at the breakfast table and said: Hey, Stephen, what’s truth?  He leans back in his chair, looks up in the sky, and he goes: What’s real?  I said: That’s darn close, son.  Conformity of mind to reality.

Mike:  Just another point, back to the shootings at the college.

Mike:  Damon Linker writing at The Federalist last night asks the question: What do all these young men have in common?  What do all these mass murderers have in common?  He determined that they — I talked about this in the first hour of the show — he determined that they were males.  As I told the audience in the first hour, that’s a great start.  We’re at a universal.  Then I tried to compound it with: What is it that all males can do that females cannot in the natural order of things?  All of them can do it.  It’s an accident that some are impotent because I anticipated the modernist, [mocking] “Some are born hermaphrodites, you idiot.”  I anticipated that.  That’s an accidental.  That’s an accident of the universal.  That does not disprove the universal, okay, jerkweed?  What do all males have?  They can fertilize eggs.  We’re naturally built, this is what we’re put here to do, that way there’s a next generation that can fertilize eggs.  What is it that our boys are principally deprived of?

Simpson:  Their masculinity, being a man, becoming a father.

Mike:  And their masculinity is directly linked to that natural — we don’t even have to go supernatural here — to that natural process of fertilizing those eggs.  Then I said: Now there’s one more part to this and some of you aren’t going to like it.  Now we have to bring a little bit of the supernatural in here.  It is true that secular culture can teach him how to fertilize eggs.  It teaches him very well how to do it at a young age and often.

Simpson:  And in all kind of improper ways.

Mike:  In all kind of improper manners and all kind of improper positions and you name it.  The supernatural, though, makes him conform to the reality of why he was created to do that.  Without the supernatural to force him, to provide him the opportunity to use his freewill to conform, now we’ve got a real man here.  If somebody says: What’s a real man?  He knows what he is, number one.  He’s not Caitlin Jenner.  Number two, he accepts the natural part of it.  Number three, he conforms his mind to that reality supernaturally.  That’s pretty much a good definition of a man.  How many of those boys were in training to become fathers?

Mike:  Has anyone even looked to see whether or not any of those mass murderers had children?

Simpson:  I have not thought of that but they probably have not.

Mike:  I just ran a cursory skimming of the stories.  The ones that I looked at did not.

Simpson:  Or if they did it was all broken and at that point shelved.  If there was one or two examples of it, it probably was a very broken situation.