Moderns Ignore At Their Souls’ Peril

Mandeville, LA – Exclusive Transcript – “We have Rod Dreher from The American Conservative on the hotline with us.  Get a copy of his book How Dante Can Save Your Life: The Life-Changing Wisdom of History’s Greatest Poem.”  Check out today’s transcript for the rest….

Mike:  Let’s go to the Dude Maker Hotline and say hello to an old friend, columnist and New York Times best-selling author at The American Conservative Magazine – Rod, are you a Louisiana native or are you an adopted Louisianan?

Rod Dreher:  Oh, no, I’m a Louisiana native.  I’m talking to you from beautiful Star Hill, Louisiana this morning, right up the Mississippi.

Mike:  Why was I thinking you lived in St. Martinsville?

Mike:  I love it when you write about your little town, about how small and quaint it is, and about how you and your wife have made the adjustment from New York City to Dallas and now Starhill.

Dreher:  Here we are.

Mike:  I enjoy reading your work every day.  I don’t always agree.  My disagreements are petty in comparison to the great body of work that you’re putting out there, Rod.  Please, you’re the voice of reason and sanity out there on that side of the spectrum.  Keep writing as you do.  It’s enjoyable to many of us to read.  Your courage is also to be commended.  I know from experience, because if I try to do something similar here on the radio airwave, how it is received and the correspondence that I have with many people.  Please know that you are in my prayers, my brother.

Dreher:  The story starts when I came back to Louisiana a few years ago after my sister Ruthie died.  I wrote a book about her called The Little Way of Ruthie Leming.  I saw real holiness in the life of my sister, a small-town school teacher here in Louisiana who didn’t go east as I did to seek professional fame and fortune.  She stayed right here in the small town and taught the children of the poor and other kids. She was struck down by cancer in the middle of her life, left behind three kids and a husband.  I was living in Philly at the time.  The way she suffered, the way she met her death, and the way this small town in which I was raised and which I thought I’d never see again, the way they responded to her suffering really converted my heart.  My wife and I said: We want to be part of that.  After she died, we moved back.  I wanted to help raise her kids, but as it turned out, as I found out after I got back, one of her daughters said: My sisters aren’t going to welcome you because our mom secretly raised us to think you were a bad guy because you left home.  That was devastating to me.  My illusions were shattered.  I had always put family at the top of the things I worshipped.  Now I found out it was all an illusion.  I fell into depression and I fell into physical illness.  A rheumatologist said: Brother, you’ve got to find inner peace some way or you’re going to destroy your health.

That’s when I ended up in the Barnes & Noble.  I don’t read fiction, Mike, and I sure don’t read poetry, but there I was in the poetry section.  I’m looking at a copy of The Divine Comedy by Dante Alighieri.  It’s The Inferno, The Purgatorio, and The Paradiso.  I pull it off the shelf, open it up, and the opening lines of the problem really set the hook: In the middle of the journey of our life, I came to myself, in a dark wood, for I had lost the straight path.  I thought: That’s me.  I’m middle-aged.  I thought I was coming home.  I really landed in a dark wood.  Maybe this guy has something to tell me about how to get out of this place.  I ended up getting the book.  I spent five months reading it carefully.  Like a man tried to save his life at the end of it, I came out of it restored physically and spiritually and ready to start a new life.

Mike:  In the book How Dante Can Save Your Life, is this a memoir, a historiography, if you will, linear of the journey, or is it reflections on the journey?

Dreher:  It tells the story about how I made it, how I worked my way through the poem.  The Divine Comedy is a pilgrimage.  Dante goes through hell, goes up the mountain of purgatory, and then soars through Heaven to meet God.  It’s a symbolic journey.  It’s a journey of every man into his own heart and to conquer his own simple tendencies in his heart, to be restored to fellowship with God and other people.  This is what happened to me.  My book is not a book of literary analysis, though there is some of that in there.  It’s a story of a soul.  It’s a story of a pilgrimage of a soul.  It’s a story of every man.  When I read Dante, I never imagined this medieval poem would have anything to say to me, but I found myself in the pages of this poem.  In my book How Dante Can Save Your Life, I show my readers how they can find themselves in the pages of the poem.  The name of the book is not How Dante Saved My Life, though he did; it’s How Dante Can Save Your Life.  I really do think that everybody can benefit by reading this poem.

Mike:  The Life-Changing Wisdom of History’s Greatest Poem, that’s not bluster, is it? 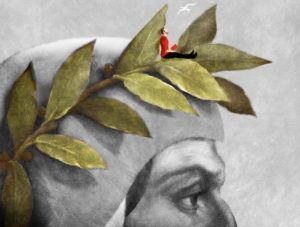 Dreher:  No, it really isn’t.  This poem is considered one of the highlights of Western civilization.  It came out of the 14th century.  T.S. Eliot, the great 20th century poet, said in Western literature, “Dante and Shakespeare divide the world between them.  There is no third.”  I had always looked at The Divine Comedy as something like: Yeah, maybe one day when I’m an old man I’ll ready that.  It was more of a monument than a living work.  Boy was I wrong.  I was so wrong.

Mike:  I thought the same thing, Rod, about reading St. Thomas Aquinas’s Summa.  I’ll refer to it and if I need it as a reference guide I’ll refer to it.  It wasn’t until I actually started going: Okay, I’m just going to start at the beginning and see how far I make it.  If you know anything about the Summa, and I’m sure you do, this could take me 20 years to work my way through it.  It’s a similar experience just in the clarity in thought.  What has the reading of Dante done to your thought process?  I have noticed as a reader of yours for three years now, a sea change in your approach to the way you view almost anything.  You view almost everything that you write about now, brother.  We have Rod Dreher from The American Conservative on the hotline with us.  Get a copy of his book How Dante Can Save Your Life: The Life-Changing Wisdom of History’s Greatest Poem.  I’ll link to it in today’s Pile of Prep with the Amazon link.  I have seen how your thinking and your writing has changed.  Has Mrs. Dreher seen it?  Have you seen it?  How would you respond to that?

Dreher:  She has seen it.  In fact, she was the one who pushed me to get help out of my depression and chronic fatigue.  She told me: You’ve got to go see a therapist.  I said: I don’t want to see a therapist, all this Dr. Phil stuff.  It’s nonsense.  She was having to live with me sleeping six hours a day, not being able to leave the house.  As it turned out, I began to see a therapist around the same time I picked up Dante.  The stuff my therapist was telling me about how to reorder my life, I would have brushed it away if it hadn’t been for Dante.  I was reading the same stuff in Dante.  The fact that it was coming to me in the form of art, the most beautiful art, the most sublime art ever made in the West, that made all the difference.  I took it into my heart.  I was converted.  I realized, Mike, when reading this, going through The Inferno in particular, that I had made a god of family and a god of place and hadn’t realized what I had done.  I put them in the place of Almighty God in my heart.  Once that was uncovered in me, I took it to confession.  I told my priest: I want to repent to this.  The floodgates of grace opened up and that’s when my life began to change and I began to get well.

Mike:  It’s very hard for many people to conceive of the beautiful prose you just put into it.  Your oratory is becoming almost as pleasing to my ear as your writing is to my eye.

Dreher:  Tell Mrs. Dreher that, would you? 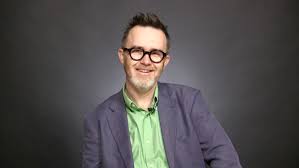 many of the things that I do, which has caused many people to say to me some of what I just said to you.  You and I have a very similar experience.  I have not yet read Dante.  Tell me, in your experience, how much of the admonition against those deadly sins is part of this process?

Dreher:  It’s at the core of it.  Dante wrote in the generation after Thomas Aquinas lived.  In fact, St. Thomas had not even been canonized yet when Dante wrote.  It’s a framework.  The whole Commedia, as The Divine Comedy is known in Italian, it is a framework for understanding sin.  To me, Mike, I always thought that sin was like breaking the rules.  As Dante explains it, and he gets this from St. Augustine and from St. Aquinas, sin is really disordered love.  We love the wrong things, we love the right things too much or too little. That really helped me to understand the complexities I was faced with in my concrete, real life.

Dante gives you this classification of sin just as a framework to peel apart and tease out how particular sins affect our lives and affect other people.  It’s tremendously powerful.  I tell people, read the Commedia.  You’ll find yourself in it, and you will find, at some level on the circles of hell, you’re going to find the sin that dogs you, that has caused you to leave a straight path.  When you go up the mountain of purgatory, you’re going to find the way out.  That’s what purgatory is in Dante.  It represents the life that we live here on earth as we are delivered form our tendency to sin.  We still have to struggle against it.  We still have to make a habit of holiness, a habit of goodness.  Dante shows you how to do that.