Mandeville, LA – Exclusive Transcript – Back to David Stockman, there are a couple more stats from the “Sundown in America” essay that he wrote.  You can find it in today’s Pile of Prep.  If you’re not already convinced, after I read you the rollover of the debt from the first hour, Stockman isn’t finished with his rundown.  I’m skipping here.  This thing is 18 pages long if printed.  I’m only going to get to about a page and a half during the entire three hours.  Check out today’s transcript for the rest…

Mike:  Back to David Stockman, there are a couple more stats from the “Sundown in America” essay that he wrote.  You can find it in today’s Pile of Prep.  If you’re not already convinced, after I read you the rollover of the debt from the first hour, Stockman isn’t finished with his rundown.  I’m skipping here.  This thing is 18 pages long if printed.  I’m only going to get to about a page and a half during the entire three hours.

Likewise, total US credit market debt—including that of households, business, financial institutions and government— was $13 trillion or 2.3X national income in 1989. Even back then the national leverage ratio had already reached a new historic record, exceeding the World War II peak of 2.0X national income.

Nevertheless, since 1989 total US credit market debt has simply gone parabolic. [Mike: How many of you people know what parabolic means? Parabolic means it looks like an umbrella. There is a straight line going horizontal and then there’s an umbrella on a graph. That’s what parabolic is.] Today it is nearly $58 trillion or 3.6X GDP and represents a leverage ratio far above the historic trend line of 1.6X national income—a level that held for most of the century prior to 1980.  In fact, owing to the madness of our rolling national LBO over the last quarter century, the American economy is now lugging a financial albatross which amounts to two extra turns of debt or about $30 trillion.

In due course we will identify the major villainous forces behind these lamentable trends, but note this in passing: The Federal Reserve was created in 1913, and during its first 73 years it grew its balance sheet in turtle-like fashion at a few billion dollars a year, reaching $250 billion by 1987—at which time Alan Greenspan, the lapsed gold bug disciple of Ayn Rand, took over the Fed and chanced to discover the printing press in the basement of the Eccles Building.

Alas, the Fed’s balance sheet is now nearly $4 trillion, meaning that it exploded by sixteen hundred percent in the last 25 years, and is currently emitting $4 billion of make-believe money each and every business day.

So we can summarize the last quarter century thus: What has been growing is the wealth of the rich, the remit of the state, the girth of Wall Street, the debt burden of the people, the prosperity of the beltway and the sway of the three great branches of government which are domiciled there—that is, the warfare state, the welfare state and the central bank.

What is flailing, by contrast, is the vast expanse of the Main Street economy where the great majority has experienced stagnant living standards, rising job insecurity, failure to accumulate any material savings, rapidly approaching old age and the certainty of a Hobbesian future where, inexorably, taxes will rise and social benefits will be cut.

And what is positively falling is the lower ranks of society whose prospects for jobs, income and a decent living standard have been steadily darkening.

I call this condition “Sundown in America”.  It marks the arrival of a dystopic “new normal” where historic notions of perpetual progress and robust economic growth no longer pertain. Even more crucially, these baleful realities are being dangerously obfuscated by the ideological nostrums of both Left and Right.

Contrary to their respective talking points, what needs fixing is not the remnants of our private capitalist economy —which both parties propose to artificially goose, stimulate, incentivize and otherwise levitate by means of one or another beltway originated policy interventions.

Instead, what is failing is the American state itself—-a floundering leviathan which has been given one assignment after another over the past eight decades to manage the business cycle, even out the regions, roll out a giant social insurance blanket, end poverty, save the cities, house the nation, flood higher education with hundreds of billions, massively subsidize medical care, prop-up old industries like wheat and the merchant marine, foster new ones like wind turbines and electric cars, and most especially, police the world and bring the blessings of Coca-Cola, the ballot box and satellite TV to the backward peoples of the earth.

In the fullness of time, therefore, the Federal government has become corpulent and distended—a Savior State which can no longer save the economy and society because it has fallen victim to its own inherent shortcomings and inefficacies.

Mike:  There are 15 more pages of this.  I had to stop reading it last night because I was about to cry.  I think Stockman is right.  These are things we talk about almost every day on this program.  We just finished a little discourse earlier this hour on the fact that the endeavor is too large to be managed.  Politics is going to fail you at every turn.  There is no method, no consortium of men on Earth that can fix this.  The question remains: What is to be done?  This is where we turn to Dr. Russell Kirk. 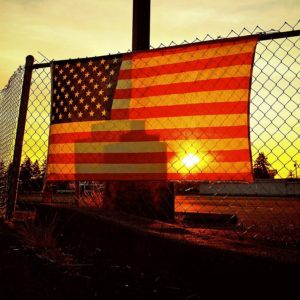