Mandeville, LA – Exclusive Transcript – “Martin Luther King, Jr. said it best in 1965 when he was asked about the Vietnam War.  [mocking] “Aren’t you being un-American by questioning our involvement in the Vietnam War?  This is a powerful nation.  We’ve got to get involved in the world’s affairs.””  Check out today’s transcript for the rest….

Mike:  “How Lenin Beat Reagan.”  Now, this is a story about where did the Russian commies go?  Where did the attitude or the swagger of Russian commies, where’d they go?  By the way, a side note, Pope Francis is in Cuba today and then will be in the United States tomorrow.  He’s doing two masses, one at the cathedral in D.C. and one in Philadelphia, I think.  There’s an outdoor one that they’re doing, too.

Mike:  There’s one outdoors and there’s one at the cathedral.

Paul:  Correct.  And then he’s giving his big address to Congress on Thursday before he heads out of town.

Mike:  Many people are theorizing on what the Holy Father is going to say.  I won’t comment on it because I don’t know.  I will comment on what he has already said and a couple other things in a moment, but I want to do this first.

Russians, raised on a steady diet of Soviet exceptionalism and “creaking camaraderie” (Orwell’s phrase), could conceive of no effective opposition to such dynamic dysfunction as America presented. Tanks, slogans, and ICBMs were useless against “Like a Virgin” cassettes and boxes of rubbers brought into the country by unwashed American undergrads whose criticisms of their own government were little different in kind from their head of state’s. The moral of the story

was not so much that our brand of patriotism, our brand of ideology, was superior. Rather it was that we largely eschewed such things, or kept them to a decent minimum, lest they bog us down in the sort of ritualistic affirmations we so readily mocked in the Soviet bloc.

So it’s ironic that in the 25 years since the USSR went poof, and especially in the dozen-plus years since 9/11, the American right has increasingly adopted the style of the old Soviet Union, starting with the znachki. Reagan didn’t wear a flag lapel pin―not when debating Carter, not when debating Mondale, not when negotiating with Gorbachev. Outside the circus atmosphere of a political convention, virtually no one wore flag lapel pins back then. Nowadays they’re nearly compulsory in political circles and are a common enough sight on everyone from newsreaders to sportscasters to talk-show hosts: a society-wide assimilation of nationalist kitsch worthy of the USSR and, accordingly, so perfunctory as to have meaning only in absence.

Then there’s the pure, uncut tovarishch talk of “you’re a great American,” the salutation Sean Hannity exchanges with favored guests and callers on his radio show. His book covers, too―with their abundance of reds, whites, and blues, and titles like Let Freedom Ring and Deliver Us From Evil―are enough to make one appreciate the graceful understatement of old Socialist Realist propaganda.

And one can’t avoid mentioning Fox News when discussing Orwellian uses and abuses of language. The mock-heroic “Fair, Balanced, 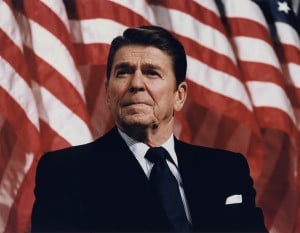 and Unafraid” and “No-Spin Zone” are splendid examples of Ministry of Truth doublethink, insofar as you’re supposed to believe them and not believe them at the same time: believe them because they proclaim noble ideals and not believe them because if you’re a typical Fox News viewer you tune in precisely because you’re sure to encounter a gratifying and unembarrassed partisanship—sometimes known as spin—delivered with patriotic-hued backdrops, exhilarating denunciations of enemies of the state both without and within, and of course, flag lapel pins.

Part of Fox News’s charm, however, is that the network has set itself up as a kind of government in exile―defending the faith on a cable redoubt from which it can conveniently deprecate as un-American anything the actual American government does or doesn’t do. Hence Fox’s sensibility: a heady cross-purposing of Radio Free Europe and old-school Vremya. This seeming paradox, though, has roots that predate the Eisenhower administration, as Mary McCarthy, confessed anticommunist, noticed in 1952 in that year’s response to the country’s perennial Red anxieties: “The strange thing is that this current indoctrination for democracy has very much the same tone―pious, priggish, groupy―that we objected to in the Stalinism of the popular-front period.” The tone is no less successful now.

Where Orwell is concerned, however, it’s not really 1984 but rather his 1945 essay “Notes on Nationalism” that gets nearest the tenor of the times and best captures the paradox of ardent democrats sounding like New Soviet Men. Orwell applies the term “nationalist” less to jingoes from this or that geopolitical entity and more to a habit of mind whose main identification might be ideological, racial, religious, or based, for instance, on party or class. Whatever the affiliation,

“A nationalist is one who thinks solely, or mainly, in terms of competitive prestige . . . .”

Mike:  Folks, this is what drives all this insanity that we see around us with the war hawks.  One of the last callers that was on this show last hour said something to the effect of, [mocking] “And Obama lets Iran menace the rest of the region and acquire a nuclear weapon.”  One, they haven’t acquired a weapon yet.  Number two, they haven’t menaced the region any more than the United States has menaced the region.  But I would also add the caveat here when I hear American exceptionalism, hyperbole, and arrogance.  I mentioned this but I only had ten seconds.  There were five or six other parties that signed this agreement that Secretary of State Kerry signed or Obama signed or whoever signed it.  Why aren’t they to blame?  Why aren’t the Krauts to blame?  Why aren’t the French to blame?  Why aren’t the English to blame for Iran?  Why is it only the United States that’s to blame?  It’s because we’re ‘Murica.  [mocking] “Where America doesn’t lead, there’s a vacuum.”

Martin Luther King, Jr. said it best in 1965 when he was asked about the Vietnam War.  [mocking] “Aren’t you being un-American by questioning our involvement in the Vietnam War?  This is a powerful nation.  We’ve got to get involved in the world’s affairs.”  King correctly stated that: No, we need to speak with a moral authority and waging unjust wars to the sacrifice of tens of thousands of our boys is not just and it’s not moral.  It’s been downhill ever since.  Downhill ever since.