Mandeville, LA – Exclusive Transcript – We create these situations with our meddling overseas under which we need this purported protection of this massive military-industrial might, the largest of its kind in the history of the known universe.  After having done that and after the enemy reacts predictably as you would expect them to react, then the prophecy becomes self-fulfilling and now we have to have all this stuff for national security.  Now basically the American population can be bribed, cajoled, and blackmailed into accepting these trillions of dollars, in most cases, in needless, fruitless, and dubious expenditures in order to “keep us safe.” Check out the rest in today’s transcript…

AG: Are we being critical enough when we look at the defense spending?  I know a lot was made of a year or so ago, particularly the guy that stood out in my mind was Bill O’Reilly discussing those $40 muffins and them being a waste of money and accountability there.  Why hasn’t media and conservative media, because I think you have to look inward in terms of your criticism.  If you’re going to criticize the government for having $40 muffins or whatever the price was, which was, yes, ridiculous, but then you look at this article and we’re paying so much money for a fighter jet that has less payload, shorter range.  We’re paying an exorbitant amount of money for this new Navy vessel that veers off course and leaks, this Army tank that is incredibly heavy and not as capable of surveilling the entire battlefield.  Are we being hypocritical, we as in conservative media in general, not necessarily this show, by being critical of government spending on such relatively small issues as muffin prices, but then we won’t look at such a big issue like some of this military spending, which is incredibly inefficient?

Mike:  By the way, you are correct to exempt this show, because we are critical of the entire Department of Defense budget.  As a matter of fact, as you’re talking about this tank, I’m thinking to myself: What do we need a tank for?  Where’s the land war?  Where do you plan to invade next that you need a brand-new tank to be sent over there?  There’s got to be someplace in Africa that is in need of some American exceptionalism, I guess, someplace in the western part of Africa where the oil is that’s in need of some American exceptionalism.  What about Mexico?  I keep wondering when we’re going to invade Mexico.  They seriously need some American exceptionalism down there.  Listen to this, along those lines.  This is back to Andrew Cockburn’s article today in the Los Angeles Times.

This sounds pretty bad, except that much of that $500 billion [Mike: He’s talking about Leon Panetta’s crying into his weak tea about the sequester cutting. As I said, this is a decrease in the increase.] they are fighting to save is earmarked for items such as the F-35 “Lightning II” Joint Strike Fighters, which currently consumes no less than 38 percent of the entire defense procurement budget. Credible estimates by Winslow Wheeler of the Project on Government Oversight put the overall lifetime cost of the plane at $1.5 trillion, more than the annual gross domestic product of Spain.

Mike:  So we’re going to spend more on an entire plane than the entire country of Spain is going to produce.  One of the oldest countries in the European bloc, Spain will not produce what we’re going to squander on this F-35 plane.  If you want to add insult to injury, listen to this:

Even were the aircraft a miracle of combat efficiency, such staggering expense would be unpalatable. But 20 years of development has produced a fighter that is more sluggish, with a shorter range and 50 percent less payload, than the F-16 it is slated to replace. Potential foes fearful of its advertised radar-evading stealth features will find Rosoboronexport, the Russian arms export agency, happy to sell them a mobile, low-frequency stealth-defeating radar for $10 million each.

Despite this sorry record, the Air Force is reportedly preparing to fight to the death for the F-36. Nor are the other services any less ready to defend their own cherished projects. The Navy determinedly fends off all budgetary threats to the 3,000-ton Littoral Combat Ship, though at $500 million each we might expect more than a lightly armed (one gun, one defensive missile launcher) vessel with an inherent tendency to veer off course at high speeds and to develop cracks and rust.

The Army, meanwhile, wants to spend $34 billion (at least) on the Ground Fighting Vehicle, a troop carrier currently projected to weigh up to 84 tons – more than an M1 tank. Gorgon Stare, a drone-mounted video system touted as capable of surveilling tan entire town in the sharpest detail day and night, failed its tests so dramatically that testers urged it not to be fielded, but the Air Force shipped it to Afghanistan anyway, and has since adamantly refused to release any details of its actual performance. The list goes on, but the picture is clear.

Once in a while, a politician calls the military’s bluff. Former Soviet leader Nikita Khrushchev recalled his admirals fighting to retain big surface ships because, though useless in combat, “our naval commanders thought they were beautiful and liked to show them off to foreigners.” It is unlikely that President Obama would ever express such sentiments, even if he harbors them. Nevertheless, even while the rest of us tut-tut over the perks or our high-ranking military caste, we might ask a few questions about where the really big money goes, and for whose benefit.

Mike:  This is just offensive in the most pejorative, diabolical sense of the word here.  Once again, because the scale of the operation is so bloated and so large, we’re talking about tens if not hundreds and in one instance trillions of dollars being squandered in endeavors where there’s no accountability.  We must have this for national defense, we’re told.  We must have these things, otherwise we’re not secure, we’re not this, we’re not that.  That just does not comport with reality.  No country on the face of the planet, per capita, spends what this country wastes in $40 muffins and planes that don’t fly and do what they’re supposed to do.  For how long does this get to continue?  We now basically have a civilian population that is in some manner subordinate to a military control.  The military, by bribery, by extortion — I’m not speaking of the soldiers out there; I’m speaking of course about the big contractors that are in bed with the generals who see to it and know that their lavish retirement as consultants and what have you are streets paved with gold.  They have to make sure that there is some sort of necessity for the weaponry or the spending to research the weaponry that is currently happening.  It’s got to continue, otherwise there’s no gravy train.

We could find the audio of this.  If you go back and listen to and watch Dwight David Eisenhower’s farewell address as he spoke of the military-industrial complex, there was a historian — I’m trying to remember who Ike’s biographer was.  Whoever that gentleman was was there at the time that Eisenhower was writing the farewell address.  Eisenhower was cognizant of, because he was a student of history, of what was going on in the post-war period.  He fretted that he had been unsuccessful, much like Ronald Reagan who would come after him, that he had been unsuccessful in stopping our fascination and what ultimately became our devotion to militarism.  Eisenhower called in his farewell address, his expression of this was to identify it as what you know it today, the military-industrial complex.  What he meant by that was a group of people that worked tirelessly inside the government to ensure that certain military programs would continue to be developed, that spending would always increase, that there was always a promoted and existential need to have military preparedness because we knew the enemy was out there.

Communism served this purpose very well for a long time, the face of the evil red menacing Russian army.  It served as the face of that threat for a long time, for almost 50 years.  When that threat evaporated, we had to fill the gap.  The terrorists now step in to fill the gap.  Anyone that has visited an airport recently and has seen your tax dollars at work has to wonder what life was like before there was a TSA, before you had to disrobe in front of people you don’t know, before you had to take your shoes off in front of people you don’t know, before you had to place all your stuff in the bin and answer the questions of someone who has a badge but doesn’t look like someone who ought to have a badge.  That’s not a knock on the people that actually accept the jobs for the TSA.  You do know that the TSA is part of the defense budget.  They’re part of the Department of Homeland Insecurity.

We create these situations with our meddling overseas under which we need this purported protection of this massive military-industrial might, the largest of its kind in the history of the known universe.  After having done that and after the enemy reacts predictably as you would expect them to react, then the prophecy becomes self-fulfilling and now we have to have all this stuff for national security.  Now basically the American population can be bribed, cajoled, and blackmailed into accepting these trillions of dollars, in most cases, in needless, fruitless, and dubious expenditures in order to “keep us safe.” 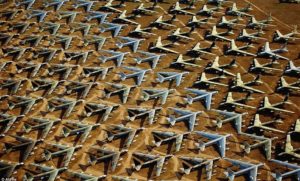