Mandeville, LA – Exclusive Transcript – We have the news from Detroit.  This is really sad, really sad and tragic.  It’s not sad and tragic just in an economic sense.  If you haven’t heard the news, Detroit is going to become the largest municipal bankruptcy in the history of the United States as it has filed for bankruptcy protection.  Much of this, I think, could have been averted, but it probably couldn’t have been averted in the last ten years.  In other words, what was set in motion 40 years ago, maybe 50, is what is responsible for this.  Check out today’s transcript for the rest…

Mike:  We have the news from Detroit.  This is really sad, really sad and tragic.  It’s not sad and tragic just in an economic sense.  If you haven’t heard the news, Detroit is going to become the largest municipal bankruptcy in the history of the United States as it has filed for bankruptcy protection.  Much of this, I think, could have been averted, but it probably couldn’t have been averted in the last ten years.  In other words, what was set in motion 40 years ago, maybe 50, is what is responsible for this.  This is not something that just came up overnight.  It’s not something where we’re just in a spate of bad luck.  Yeah, you may have some misfortune there, but that’s not the cause of your troubles.  This goes way, way back.

Folks, you have to remember, and I hope that this comes out when there is discussion of this.  The only way you can benefit from making a mistake is if you learn from it.  Those of you that are athletes can tell you this.  You become a better athlete by doing things that did not produce the result you wanted.  That could be in some manner in which you’re practicing, or maybe during a game you make a wrong decision.  It might seem like the right one at the time and it turns out to be awful.  You learn from it.  You make a mistake, you learn from it, and you move on.  When you’re playing golf, one of the things you must train your mind to do is to absorb the mistake, catalog it that you’re not going to do that again.  There are very few physical mistakes in golf; a lot of mental mistakes.  I’d say the game is won and lost on mental mistakes.  Catalog what it is that you did, resign yourself not to do that again.  Put a red flag up in the old noggin and move along.

So mistakes are actually good.  If we don’t have mistakes, we don’t learn.  If you don’t have mistakes, you can’t learn what works and what doesn’t work, what’s good and what’s bad.  The problem is when you ignore the mistakes.  When you ignore the bad, which Detroit, Michigan and other major American cities and probably three-quarters if not more of the elected political elite of the United States have not been learning from mistakes.  Detroit, Michigan’s troubles, in other words, are five decades in the making.  Detroit, Michigan was the model city for all of the wondrous things that the war on poverty could do.  Oh, the wonderful things LBJ can do.  He can give you a lot of money.  He can go moo moo.  Of course, I’m paraphrasing and satirizing Dr. Seuss’ Mr. Brown.  The analogy fits.  Oh the wonderful things the war on poverty can do.  And boy, didn’t it do wonderful things.

The things that happened in Detroit have been happening all across the U.S., and they have been happening as a result of a theoretical statement or a theory around which the policy was built.  You people know it well.  The theory is that poverty is an economic condition, a financial condition.  While the financial condition may be the symptom and may be how it outwardly manifests itself and may be easiest to see, that’s not what causes the financial condition.  Poverty is a poverty of values.  If you have a poor or no work ethic, you’re probably going to stink at earning wages.  You may think: So, I’m going to stink at earning wages.  Well, you’re probably not going to rise up the wage ladder.  If you don’t rise up the wage ladder, then you are probably going to be rated to be impoverished.  If someone comes along and tells you: Don’t worry about that work ethic thing.  We’ve got it covered.  We’ve got your back.  That is a very short description of what has happened over the last 50 years in Detroit….

What do you say to the people and to the hundreds of thousands that have been robbed of their dignity and have been robbed with the ability to fail and have been robbed from the process of making mistakes and learning by them?  If you can’t economically make a mistake because you have a certain low point threshold that you’re never going to fall below because the welfare state or whatever part of the state is going to compensate you for it, then you can’t make mistakes.  You’re not making a mistake on the State’s dime because the State’s never going to tell you no.  There’s nothing that you can do that you could actually learn from.  You may be able to survive, but you’re not going to thrive.  That’s what’s happened in Detroit.

My question is not one of, [mocking] “What do you say, we ought to blame the liberals?”  Certainly there’s ample blame to go around, but that’s certainly not going to fix the problem.  Demonizing and vilifying people is not going to fix the problem.  It’s not going to address what is at issue here.  What would address what is at issue here is to have an honest accounting of how Detroit got to where they are.  My fear is, just reading the story that we have here for you today, my fear is that what’s going to be blamed are going to be exterior factors.  [mocking] “Well, it’s the worst economy . . . a confluence of bad business decisions.”  That does not account for the unbelievable decline.  Debbie will be with us later.  She lives near Detroit.  You people that live near Detroit, I bet you can bear witness to this, can’t you?  I bet once upon a time, if you’re old enough, when you were young, the City of Detroit was probably, I don’t want to say a garden paradise, but was probably a great city to go to.  You probably would look forward to it.  Now you might view that with trepidation.  How does this happen?  Someone will write a great history of this.  Someone will write it very soon.  Maybe, just maybe, they’ll get it right and the learning can begin.

Detroit filed for the largest municipal bankruptcy in U.S. history Thursday after steep population and tax base declines sent it tumbling toward insolvency. [Mike: Tumbling toward? No. It’s been insolvent.]

The filing by a state-appointed emergency manager means that if the bankruptcy filing is approved, city assets could be liquidated to satisfy demands for payment.

Mike:  So what are you going to do, sell lampposts?  What’s a city asset, park benches?  What’s a city asset?  What do you call those things, AG, where you go and they’re glass enclosed and have a bench in them and you go wait for a bus under?  I know it’s a bus stop.  What is that enclosure called?

Kevin Orr, a bankruptcy expert, was hired by the state in March to lead Detroit out of a fiscal free-fall, and made the filing Thursday in federal bankruptcy court.

“Only one feasible path offers a way out,” Gov. Rick Snyder said in a letter to Orr and state Treasurer Andy Dillon approving the bankruptcy. The letter was attached to the bankruptcy filing. 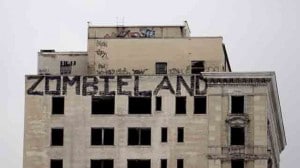 0Shares
bankruptbankruptcydetroiteconomicsEconomyemploymentethicsjobslbjpovertyunemploymentvalues
Previous PostCatholic University Presidents Should Listen To John F. Kennedy And Keep Religion Out Of PoliticsNext PostAmericans Can Say We Live In A Free Market Economy, But That Doesn’t Make It True