Mandeville, LA – Exclusive Transcript – It is okay to misspeak.  It happens all the time.  Take it from someone who does 15 hours of live broadcasting in a given week.  I think, though, that your actions ultimately will speak much louder than your words.  As long as you act in a manner that is congruent or consistent with an anti-drone, anti-big government, anti-police surveillance state is a good thing and something that you’re willing to make sort of friends with.  As long as you’re clear that you’re not willing to make sort of friends with it, you don’t have a problem.  Check out today’s transcript for the rest…

Mike:  Let’s go to Mike in Mandeville, Louisiana.  Yes, Mike, you’re on The Mike Church Show.  [mocking] “Yeah, Mike, I have a suggestion for you.” — “What’s that, Mike?” — “Well, what I’d like to say is…”  I could actually do this Phil Hendrie style.  Remember Phil Hendrie?  I could just call myself.  I could call myself and pretend like I’m me on the other line.  The man was just sick, and I mean sick in a good way, in being able to do that, just an amazing talent.  I saw him do that one time.  He left WIOD in Miami as I was arriving in 1997.

Alter Ego: I have a suggestion, Mike.

Alter Ego: Some people think that you’re pretty hard on Rand Paul and that you don’t like Rand and that you and Rand are not best buddies, BFFs.”

Mike: That’s not true. I always have room here on this show and a special place in my heart for Rand Paul. What’s your point?

Alter Ego: Mike, I would just suggest to you, instead of Rand Paul continuing to grovel at the feet of the media masters that he once rallied against, why doesn’t he make an appearance on your show and answer your queries and questions and maybe some of your listeners’ queries and questions about what he said or did not say Tuesday night in regards to drones and what he thinks about their use?

Mike: Well, you know, Alter Ego, that’s a pretty good suggestion. Those that think I’m supposed to be Rand’s best buddy on the air when I disagree with Rand don’t know an awful lot about me, and I don’t think realize what it is that we are in business to do here on this show, which is to disseminate truth. I’m supposed to be nonpartisan. I made a commitment to myself to be nonpartisan, and yes, that includes members of the Paul Family. I rarely if ever disagree with Ron, and that’s just because I just don’t. Rand I have some disagreements with, but Rand is always welcome here. You know what, Alter Ego? Let me tell you something. You can relay this to the Randians out there who still monitor this program or who will hear through the grapevine what Mike said. It would do an awful lot of good and go an awful long way for Rand to appear in a circle where he would receive objective questions that are not subjective. There’s no cheering section here. There’s no peanut gallery to heckle. There would just be: Let’s go back to cases and what it is that you said; Rand Paul, you say what? Gee, Alter Ego, that is a fantastic suggestion. Maybe you should email that to Jack Hunter.

Alter Ego: Well, Mike, I would email that to Jack Hunter. As a matter of fact, I have. He hasn’t responded.

Mike Church Show Audio: Imagination Is What’s Needed To Unplug From The State

Mike: Alter Ego says that if we just broadcast it out there, someone will then send it to them and we will be mighty appreciative and very happy to host the great senator from the State of Kentucky, Rand Paul, on these radio airwaves in a free and open forum to discuss whatever it is he likes, but to answer a few very pointed questions from the host of the show about drones and about their use and about what happened last week. The reason I bring this up is — you want to fill this in, Alter Ego?

Mike:  There’s a headline at Politico.com from yesterday.  This was Thursday.  This was two days in the aftermath and two days after a statement was released by Senator Paul.  He’s still having to deal with this.  “Rand Paul defends himself against drone backlash,” by Ginger Gibson.

Sen. Rand Paul spent 13 hours on the Senate floor staking out a very public position as the most anti-drone member of Congress.

But a month later, a backlash from fans and critics alike is brewing over comments he made on Fox Business News that seemed to fly in the face of the very cause he was championing.

For a politician like Paul — who has thrived politically on the grassroots libertarian support that he inherited largely from his father, Ron — appearing to wiggle away from that position could have detrimental consequences. Paul appears to be organizing for a 2016 presidential run and he will need that libertarian support to get off the ground.

“If people want to say I changed my position, it’s untrue,” Paul told POLITICO on Thursday from the Capitol. “It’s the exact same position. It’s always been about opposition to targeted killing, doesn’t matter if it’s with a drone, a sniper rifle, a spear, a knife. I’m against targeted killings. What people don’t understand is that when there is a violent act going, a gun fight, when people are shooting back-and-forth and the police are being shot at, the police have always been allowed to use deadly force.

“That’s all I was trying to say on Neil Cavuto and people who say otherwise, I think, are up to some other nefarious motives.”

Mike:  What you said, Senator, and I could play the digital media file back to you, is that if a guy is leaving a liquor store and has a gun and $50 in his hand, you didn’t care whether or not he was killed by a bullet or by a missile from a drone.  You don’t have to fabricate anything.  You don’t have to be up to anything sneaky to take the direct words you used and just play them back and comment on them.  Here’s the distinction that I would make to my alter ego, who is our first caller here today, and to those listening who may relay this to the great senator from the State of Kentucky.  It is okay to misspeak.  It happens all the time.  Take it from someone who does 15 hours of live broadcasting in a given week.  I receive all manner of email every single solitary day of the week correcting grammar, correcting punctuation, correcting dates.  I might have said April 25th on something that was April 24th, correcting insignificant factoids or questioning, [mocking] “You said, I’ve got the transcript right here, bucko, you said X and that means you’re a big fake, a big fraud.”  We all have to deal with it.  It is okay to misspeak or to have people misunderstand your words.

I think, though, that your actions ultimately will speak much louder than your words.  As long as you act in a manner that is congruent or consistent with an anti-drone, anti-big government, anti-police surveillance state is a good thing and something that you’re willing to make sort of friends with.  As long as you’re clear that you’re not willing to make sort of friends with it, you don’t have a problem.  You have the blessing, love, and I would say financial and other moral support of a legion of libertarian-leaning and [r]epublican people out here.  It’s as simple as that.  People are just looking and asking for clarity.  They don’t like being played like there’s another politician in the room, roll your eyes in your head and go: Oh, brother, here we go again.  That’s really, Senator Paul, what has your fans and your father’s fan base up in arms.  That is at the heart of it.  They rolled their eyes and went: Here we go again.  What they meant by that and thought by that was:  He’s just another politician.  Whereas, you once were one of them, one of us, now you have become one of — when I say one of them, I mean one of those Ron Paul forum, Daily Paul, LewRockwell.com kind of guys.  Here’s the best example I can give.  This is early Rand Paul, early career United States Senate.  This is what I’m talking about here.

Our founding documents were very clear about this. You have a right to pursue happiness, but there’s no guarantee of physical comfort. There’s no guarantee of concrete items. In order to give something concrete or someone’s service, you’ve got to take it from someone. There’s an implied threat of force. If I’m a physician in your community and you say you have a right to healthcare, do you have a right to beat down my door with the police, escort me away, and force me to take care of you? That’s ultimately what the right to free healthcare would be. If you believe in a right to healthcare, you’re believing in basically the use of force to conscript someone to do your bidding.

Mike:  See, that’s very clear, very concise, very passionate, something that most people that have followed Ron Paul and others who think and believe and act like Ron Paul, it’s very consistent that what one of them would have said.  There’s no equivocation there. 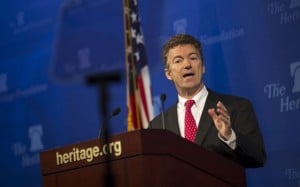