Mandeville, LA – Exclusive Transcript – How can Hooters get away with banning or refusing to serve Mayor Filner?  I’m not making any excuses, and I’m not going to, for Filner’s un-gentlemanlike, boorish behavior.  That’s not even at issue here.  What is at issue is that Mayor Filner is most certainly of a distinct racial group and gender.  It’s undeniable.  So in 2013, discrimination is indeed, not only is it permitted, there are people out there that are cheering this on.  Check out today’s transcript for the rest…

Mike:  This little vignette out of San Diego, California, which says the mayor of San Diego, one Bob Filner, is to be banned and not to be served in a Hooters restaurant, begs, I think, a most inconvenient and a most intriguing question.  In a day and age where if service is denied of anyone, it doesn’t matter who they are, it does not matter what their station in life is, if they are a member of a particular minority group, if they have a proclivity for experiencing sex in certain positions and have announced it to the world, if they have a proclivity for altering their God-given gender or something like that, try and deny service.  Some of you are already going to say, [mocking] “Yeah, yeah, but Mayor Filner is this.  This is different.  This is over politics.”  Since when does intent matter?  How much value is placed on the intent of why you discriminate?  Either you discriminate or you don’t.  The last I checked, if you try to discriminate against someone because you don’t like their sexual choices, for example, we can’t let the free market decide: We’re not going to do any business with you because you deny that person and we think the gays are okay.  So why are you, Joe Smith’s Acme Hardware, saying you’re not going to serve that individual?  It’s my business and my decision and I don’t have to sell to them, which, by the way, ladies and gentlemen, I am perfectly fine with.

Again, public acrimony is a far more powerful motivator than threats of government retribution ever will be.  Government retribution may shut your business down.  It’s probably not going to land you in the clink.  Public acrimony will shut your business down and will land you in an economic clink because people won’t associate with you.  There is as equally large a potential to react against someone that is a bad actor in a community outside of the confines or outside of what it is that officialdom or officials can do.  How can Hooters get away with banning or refusing to serve Mayor Filner?  I’m not making any excuses, and I’m not going to, for Filner’s un-gentlemanlike, boorish behavior.  That’s not even at issue here.  What is at issue is that Mayor Filner is most certainly of a distinct racial group and gender.  It’s undeniable.  So in 2013, discrimination is indeed, not only is it permitted, there are people out there that are cheering this on.  This is from FoxNews.com:

For the moment, San Diego Mayor Bob Filner is still welcome in his 11th-floor City Hall office, despite a burgeoning recall movement against him after more than a dozen women came forward to allege sexual harassment, either through unwanted advances or inappropriate statements.

However, the 70-year-old former Congressman is very much unwelcome in Hooters.

Four San Diego-area branches of the national chain best known for having waitresses wear tank tops and tight orange shorts have posted signs saying that they would not serve Filner.

“This establishment recognizes that we all have political differences and we serve people from all walks of life,” the signs read. “We also believe it is imperative for people to have standards. The mayor of San Diego will not be served in this establishment. We believe women should be treated with respect.”

Mike:  Oh, really?  AG, how many members of Gal Qaeda do you think believed before the Filner ban that Hooters treated women with respect?

Mike:  Do you want me to answer that for you?    Do you guys have a Hooters in the DC area?  I’ve never been to a Hooters in your neck of the woods.

AG:  All over the place.

Mike:  So there is one in DC proper, in the District of Columbia, okay.

Fox5SanDiego.com reported that the signs were available for download from the website of national TV and radio personality Glenn Beck, formerly of Fox News.

Melissa Fry, the marketing director for Hootwinc, which operates Hooters franchises on the West Coast, said the embattled mayor is also banned from Hooters locations in the nearby towns of Mission Valley, Oceanside and Rancho Bernardo.

Filner has not been seen publicly since entering a two-week therapy session.

Mike:  I’m just going to ask the question again.  Please, understand or consider this in the manner in which it is presented.  If you were to switch the genders or switch the sexuality of the Mayor of San Diego, and if he or she were accused of the same purported or alleged atrocities that Mayor Filner has been accused of, and you refused him service, and if he or she were a member of — I don’t even need to get into the community.  You people can already, with your fertile imaginations, fill the blank in amongst yourselves.  If you’re a member of a certain community, whether it be a racial or sexual preference community, and if he or she were denied service, it doesn’t even matter why they were denied service, would there be acceptance of that?  The answer is no, of course there wouldn’t be.  You’d have Eric Holder parachuting in, [mocking] “I’m gonna file a civil rights lawsuit against you.” — “Why?  This person is an absolute creep.” — “It doesn’t matter, you can discriminate on the basis of . . ..”

I’m simply asking the question.  It’s a very inconvenient one.  It’s a very touchy-touchy one.  No one wants to ask this question because they fear there will be repercussions against them if they do.  I’ll be the first to lob it out there, because I think it’s ridiculous that we can’t ask this question and you can’t talk about it.  Why can you discriminate against a white guy?  Why is that legal?  Why is that permissible?  If we are all against discrimination, then we are all against discrimination, end of story.  It doesn’t matter who it’s meted out against.  It doesn’t matter who the perp is.  It doesn’t matter who the victim is.  It does not matter.  In our quest for a more perfect union, why does the white guy get the stick? 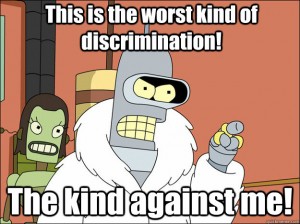