Being A Father From A Father

Mandeville, LA – Exclusive Transcript – “There’s lots that can be shared and learned between men, us men, leading up to Father’s Day here – not that we shouldn’t do it all year long, but certainly if you’re going to be regaled and honored as a father on Sunday or all weekend long, it might help you young guys out there that are about to be or are new fathers to learn just a little bit about what is in store for you and maybe receive a little bit of guidance on how you should proceed.”  Check out today’s transcript for the rest….

Mike:  There’s lots that can be shared and learned between men, us men, leading up to Father’s Day here – not that we shouldn’t do it all year long, but certainly if you’re going to be regaled and honored as a father on Sunday or all weekend long, it might help you young guys out there that are about to be or are new fathers to learn just a little bit about what is in store for you and maybe receive a little bit of guidance on how you should proceed.  The best way I’ve heard it put is that a father’s job in the house, with the wife and children, his primary and principal occupation as the priest, as the philosopher, and as the king of the house is to get all those inhabitants in that house through the narrow gate into Heaven.  It is a narrow gate.

A friend of mine sent me this from Father Peter Carota on the duties of traditional fatherhood.  I won’t bore you – because many of you would be terribly bored with these lessons of morality or suggestions of pursuing and instilling virtues in your children.  Yes, yes, I know, hand them a game controller, joystick, baseball bat or something to that effect and you’re done.  [mocking] “I don’t know what I was supposed to do.  I taught him how to throw, didn’t I?”  Maybe there’s a little more to it, maybe?  To teach it is by doing that in front of those to be taught.  Just a suggestion.

. . . fidelity to and proper use of the Sacraments, sacramentals, devotions, and other means of grace until they are well formed in piety. Trained in this way, they will stand on guard more readily and manfully against the suggestions of indulgence which initiation into worldly and bodily pleasures ceaselessly propose.

Mike:  Let me tie this to the Declaration of Independence.  As I just talked about in the start of this segment, there’s a line in the Declaration that probably, unless you know the whole thing by heart, is not well known to many.  It’s in one of the complaints that survives the editing process that Jefferson put into the Declaration.  Consider this, “He has dissolved Representative Houses repeatedly, for opposing with manly firmness his invasions on the rights of the people.”  In other words, people with “manly firmness” have opposed his invasions on their rights.

Recall that Patrick Henry, in his opposition to the ratifying of the Constitution in the Virginia Convention, used the term “manly” over and over and over again.  One example is, “. . . if twelve States and a half had adopted it, I would, with manly firmness, and in spite of an erring world, reject it.”  In other words, there was nothing that could move him to his opposition to ratifying the Constitution, and he would, with that virtue of masculinity, virtually used, oppose it in spite of the errors of everyone else.  That’s quite a statement there.  People love to focus in on, “Give me liberty, or give me death!”  Fast forward thirteen years and opposing the ratifying of the Constitution in front of your constituents – he was in front of his constituents – in front of his neighbors and his friends, and in front of 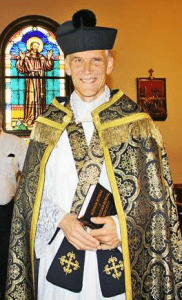 everyone else that was gathered in that convention.  That’s quite a statement.  And then to say: You’re not going to get me to back down, I don’t care what you say.  I read your little document, Mr. Madison.  I am well familiar with what you say that it does.  When I read it, I don’t see that it says that at all.  I see grave cause for concern.

Where did all the manliness go?  We might ask this here on the near eve of Father’s Day.  How many television commercials will be aired over the course of the next four days that will show men totally inept at using screwdrivers and nail guns or hammers or whatever the case may be?  But they’ll be rescued by their wives who will come in and show them how to be manly.  Some people might say: Mike, that’s just comedy.  It’s not comedy because it’s imitating life.  Right now there is a chronic shortage . . . you’re told you’re a loser.  You’re a slack-jawed, doomed-to-failure loser if you don’t go to university, or what passes as an excuse for university, and get your little degree and then enter the workforce as your elite ruling masters have planned for you to do all along.

As a matter of fact, I was going to share this story yesterday.  Since no one is interested in anything else I had to say, let’s try this one . . . that is such a drastic departure from about 1200 years of advancement in civilization.  It’s difficult for me to pick a spot that I would want to start making the comparison and trying to drive that point home.  Some of you might be saying: What difference does it make?  They go your stupid route and they still wind up getting a job.  Yes, this is where we come to the term vocation.  What is a vocation?  That’s a job, is it?  It used to be that motherhood was a vocation.  How many of you knew that?  Fatherhood is also a vocation.

0Shares
Declaration of Independencefatherhoodfathers carotamanlinessmasculinitymoralsmotherhoodparentingpatrick henryvirtues
Previous PostInterview with Joseph Pearce on IdeologyNext PostAngry Caller “John” Calls Mike a Confederate, Then Wishes Us The Fate of The Confederacy

Monday Pile of Prep-Manliness Makes Is Making A Comeback!