Mandeville, LA – Exclusive Transcript – I’m a leader in the Florida Medical Association.  I go to the collective hive that is the AMA twice a year to battle against their policies.  There was a question asked earlier: Where were the doctors?  There weren’t many doctors, like myself, in Florida and others outside of medicine trying to stop Obamacare and warn the public.  The AMA made Obamacare happen.  I like to say you can’t spell Obama without AMA.  Check out today’s transcript for the rest…

Mike:  This is David in Florida.  David, you’re next.  How you doing?

Caller David:  Yeah.  I’m a leader in the Florida Medical Association.  I go to the collective hive that is the AMA twice a year to battle against their policies.  There was a question asked earlier: Where were the doctors?  There weren’t many doctors, like myself, in Florida and others outside of medicine trying to stop Obamacare and warn the public.  The AMA made Obamacare happen.  I like to say you can’t spell Obama without AMA.  In the end, they —

Mike:  [laughing] I heard that before and I remember hearing that back in 2009 from some of you doctors.  Were you part of the group — I seem to recall that there was a group or groups of doctors running ads saying: We are not members of the AMA anymore, specifically because they are for Obamacare and you can’t spell Obama without AMA.

Caller David:  Well, I’m a member of that group, but I’m also a group of the AMA, because I’m there fighting with my freedom-loving friends to try and overtake those people.  We have another battle next week.  There’s this constant bogeyman about socialized medicine.  I don’t think socialized medicine is coming.  We have fascist medicine.  The economic model of fascism is here and everyone loves it that way.  The insurance companies are not going to allow socialized medicine to happen, but they have the same de facto effect.  We have rationing.  We have doctors as rationing agents of the State.  We have doctors who are given bonuses if they deny care.  We are creating a system where you cannot trust your doctor because they get paid more if they spend less on the patient.  It’s an ugly system.

Patients have got to say: Where are the doctors to rescue us?  Just like everything in America, they have to say: We demand freedom.  We will not accept this nonsense.  Don’t keep waiting for some class of people you think really should do the job.  You have to stand up yourselves and take back the country.  There are plenty of good options out there.  I detail them on my blog called SunBeamTimes.com on how we have better healthcare in America.   There’s a series there called “Obamacare on the Frontlines” where I talk about old ladies who are being pulled off life support and how the system helps create that.  Recently with the Obamacare rollout, the health insurance costs going up, I have details on that.  I also talk about better options.  Our Florida Medical Association has a great health system reform plan that I detail.

Mike:  I want to ask you a question, doc, while I have you on the line.  I remember back in 1993 when Mrs. Clinton was engineering with Ira Magaziner and the AMA to take over the — then HillaryCare was going to be single payer.  That’s what they were trying to do.  I remember an editorial, and I cannot remember the doctor that wrote it, but he wrote an editorial and it took up the entire editorial page of the Wall Street Journal editorial, which is a couple thousand words.  I wish I could find this today.  I remember reading it.  One of the points that the doctor made was in vilifying and demonizing all these socialist medicine schemes that the Europeans are saddled with, one of the things the Europeans had apparently come to grips with that we had not, and we were on the road to going the opposite direction, was that there are going to be certain instances where the prolonging of life through medicine and technology and machines is not going to avoid death.  The patient is going to die.  You may be able to extend it three days or three hours or 30 days, but the patient is going to die.

The doctor’s point was that there were tens of billions of dollars that were being paid, or people were going into debt over, because at that time they were being told: What you want to do is this because we may be able to give you another three days, another three weeks, we may be able to prolong you another three years.  That in and of itself was a burgeoning and growing flaw in not only the “healthcare system” but in our collective psyche.  We were being programmed and trained to think this way: There’s got to be something you can do.  It used to be in the old days of Marcus Welby, M.D. and those old TV shows: I’m sorry, there’s nothing I can do.  I’ve done all I can do.  Then the doctor walks out and the family sobs, and then the kid dies.  Can you comment on that for me?

Caller David:  I can.  I agree that there is a lot of extra money spent on people who don’t survive.  I would suggest to you that doctors should not approach this as: Am I going to save money for the system?  They should approach it: Am I going to do everything for my patient?  One of the obligations, of course, is to tell the patient there is no chance, and to tell the patient’s family it’s time to stop.  I believe these days, especially with all the forces on the other side, my job is to step in and say to the family and the patient: I’m going to try because I’ve seen about 30 percent of patients like you walk into my office a year later and hug me with tears in their eyes and say: Thank you for not giving up on me.  That is what we’re supposed to do as doctors, fight for the patient.  There’s this new ethic that the AMA embraced.  It’s an unethical ethic that says doctors are supposed to be prudent stewards of shared societal resources.  When doctors start —

Mike:  What the hell is that?  What is that?

Caller David:  When doctors say part of my job is to make sure that Mary with breast cancer doesn’t get the chemotherapy drug so that junior can get smoking cessation and vaccines, you’ve just become a rationing agent for the state.  I agree there’s money wasted, but when you pay your health insurance premium your entire life and you get that two or three times in your life when you’re really sick, I want my insurance to give me a chance.  I want my doctor to fight for me, not kill me off.

Mike:  I agree with the doctor should always fight on behalf of the patient.  I don’t disagree with that.  I recall when I was reading that, the author had written: Look, these are very difficult things to try and deal with on a societal level.  There was one other thing you said about the model and the rationing of the care and about the doctor making decisions.  If I’m to understand this correctly, what has happened over the course of the last 50 years, since the introduction of Medicare in 1964, what has happened is that a system has been erected where there used to be medicine, what you would have called a discipline.  You’re going to go to college —

Caller David:  Yes, you are absolutely right.  In 1963, Ed Annis — who we are making an award in his name to Dr. Ben Carson next week, by the way — he warned Americans that Medicare would create a new system of healthcare, setting committees, defining who gets in and who gets out, who gets care.  That’s exactly what’s happened.  We have transformed from a profession where we set our own standards, police ourselves and are professionals, to a job where we are mere rationing agents of the State.  There is a way to stop it, and it’s called freedom and standing up for yourself.  We can do it, but we’ve got to get rid of the entitlement notion.  We’ve got to get rid of the idea that the State is there to help all.  We’ve got to embrace our freedom and our responsibility.

Mike:  I couldn’t agree more.  David, thank you very much, very thoughtful, very informative.  I like the blog.  I’ll give it out a couple times for you, SunBeamTimes.com.  AG, what did you think about that?  We drew a great caller today.

AG:  Yeah, absolutely.  It’s great to get a doctor actually call in and weigh in on the pros and cons, or just the cons.

Mike:  I didn’t hear any pros. 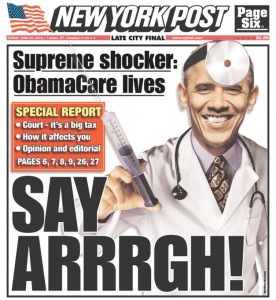