Mandeville, LA – Exclusive Transcript – Caller Eric: A hospital may charge, say $140,000 and get paid $12,000, because Medicaid and Medicare set a fee schedule and say: Hospital, here’s your $12,000 for a total knee.  You figure out how to make money.  The rest of that charge is not allowed to be passed onto the patient by law.  Check out today’s transcript for the rest…

Mike:  Dr. Eric in Indiana, he might have an answer to our question.  Hello, Doc, how you doing?  You’re on.

Caller Eric:  I’m doing well, Mike.  How are you this beautiful morning?

Caller Eric:  It’s actually decent here in Indiana for a chance, but we’re not here to talk about the weather, I guess.  I wear a couple different hats.  I’m an orthopedic surgeon who specializes in knee and hip replacement and I also own a hospital.

Caller Eric:  I can talk to this issue at great length but I won’t bore you too long.  The issue with the cost of the procedure and Medicare and Medicaid reimbursement, the price that a hospital charges is totally divorced from what they get paid.  I think you touched on this a few minutes ago.  A hospital may charge, say $140,000 and get paid $12,000, because Medicaid and Medicare set a fee schedule and say: Hospital, here’s your $12,000 for a total knee.  You figure out how to make money.  The rest of that charge is not allowed to be passed onto the patient by law.

Caller Eric:  Medicare and Medicaid say you cannot pass that extra charge or that difference onto the patient.

Caller Eric:  Absolutely not, no.

AG:  What would be the reason to have that high of a figure if hospitals know they’re not going to get paid more than x-amount of dollars?

Caller Eric:  Because also they can’t charge Medicare and Medicaid different rates than they charge private insurance.  Again, there are so many regulations within Medicare that apply to patients that you treat outside of Medicare and insurance companies you deal with outside of Medicare.  They’re charging everybody $140,000 in the hopes that the occasional third-party payer will actually pay that fee, knowing that the vast majority won’t.  Even private insurers, the Blue Cross, the Cigna, the Aetna, you contract with them for certain rates, and they’re not the same.  You may have a different rate with Anthem and Blue Cross versus Cigna versus Aetna versus United.  It’s a contracting game basically.  You may have the occasional payer who will pay this really high rate, so you charge everybody that knowing that you’re not going to get that, certainly from the government payers.

Mike:  As I listen to you, Dr. Eric, I’m thinking of this labyrinth of bureaus and bureaucrats and agents and administrators and administrations that must be present along the way that are all parasites.

Caller Eric:  It takes seven to eight people per doctor in my group.  For every doctor, there are seven or eight other fulltime equivalent positions.  Probably three of those do nothing but sit at computer screens all day and fight for money from insurance companies, from the government.

Mike:  Do you have a nickname for your money fighter?  Do you call him or her Rocky or Annie Oakley?

Caller Eric:  They have to deal with stuff that would drive you and I absolutely up the wall.  God love them for doing it.  The question you asked about would these technologies have been developed if there were no third-party payer.  Sure they would.  These technologies were developed 50 years ago when third-party payers weren’t nearly as prevalent.  What’s driven up the cost, it’s almost like Pell grants and college education.  Because the payers have been paying, the technology gets more expensive.  We’re the only industry that I know of where increases in technology drive the cost up instead of down.  It’s crazy.

Mike:  I guess my question can only be answered in a laboratory and in a vacuum, if there is no possibility for a third-party payer.  You would develop then the knee replacement or whatever thinking: What could we charge for this?  Would someone pay x-amount of dollars for this?  You might do a little marketing research like anyone else would do.

Caller Eric:  I can give you an example.  I said I own a hospital.  We own a physician-owned hospital here in Indiana.  We occasionally do procedures for people — we do a lot of charity cases, too.  We also have people who come down and pay, for instance the Amish.  They don’t have insurance so they pay cash.  I’ve done people from Mexico, Canada who come and pay cash for their procedure.  We set a cash rate and it’s all-inclusive, includes all the doctors, the hospital, equipment, everything.  It’s all one price.  I had a gentleman come up from a small town in southern Indiana.  He needed a hip replacement.  He and his wife owned a little diner.  They didn’t have insurance but they had quite a bit of savings.  They’d been working hard their whole life.  He basically asked me if I could do his hip replacement and they wanted to pay for it.  I gave him the rate and his jaw dropped.  I said: Is that good or bad?  He goes: That’s incredible.  The not-for-profit hospital in my hometown was going to charge me five times that.  That’s a not-for-profit and we’re the evil for-profit physician-owned hospital and we’re doing it for a fifth.

Caller Eric:  The answer is yes, if you get all the regulations out of the way and all that stuff, the price drops dramatically.  Those technologies could still be developed.  In my estimation, we’ve developed this model that works much better, more efficient, much safer with better outcomes.  It’s true value.  Of course, the government and Obamacare is trying to run us out of business basically.

AG:  Eric, one last thing. The rest of this article also says that these teaching hospitals, in the example I cited earlier, such as Baylor Medical Center, would receive a higher overhead in terms of reimbursement funding because they treat the low-income patients and also to fund medical education.  Is that fair in your mind or is that more just administration?

Caller Eric:  The low-income thing is debatable because all those hospitals already don’t have to pay tax.  They’re all tax exempt anyway.  That’s like double dipping in my opinion.  We pay full tax rates on our income because we’re a for-profit hospital.  That’s another discussion.  But yeah, I think in order to fund the education, because when you’re training residents and medical students it does take quite a bit more time.  You can’t be as efficient.  So a little bit of uptick for doing that is reasonable.  They’re providing a service above and beyond just taking care of people.  They’re also training the next generation of doctors, so I think that’s reasonable.

Caller Eric:  My pleasure.  I enjoy your show, Mike.  Keep up the good work.

Mike:  All right, my friend.  Thank you very much.  There you go, there’s your answer. 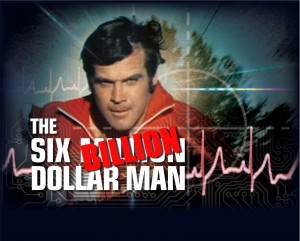 I also pay cash for my doctor and dentist appointments and I get about 40%-50% off the normal price because I do not use all of the admin staff at the clinic.