Mandeville, LA – Exclusive Transcript – I am happy to tell you today that if you go to today’s Pile of Prep, you will find from FranklinsOpus.org the Real History Quiz #2.  I’ve already taken the quiz.  You can actually see on the results page the leader board, which you’ll have an opportunity to put your name and email at the end.  The author of the quiz is my friend Stephen Klugewicz.  Yours truly got 100 percent.  We’ve got Dr. Klugewicz on the phone.  Check out today’s transcript for the rest…

Mike:  I am happy to tell you today that if you go to today’s Pile of Prep, you will find from FranklinsOpus.org the Real History Quiz #2.  I’ve already taken the quiz.  You can actually see on the results page the leader board, which you’ll have an opportunity to put your name and email at the end.  The author of the quiz is my friend Stephen Klugewicz.  Yours truly got 100 percent.  We’ve got Dr. Klugewicz on the phone.  Stephen, hello.  How are you doing this morning, friend?

Stephen Klugewicz:  I’m great, Mike.  How are you?

Mike:  I am well.  I took your quiz.  In being honest with the audience, I have to tell them that it was my second attempt that netted my 100.  On the first attempt, I missed two and I didn’t want to put my email address in there.  I had to go back to the questions and figure out what two I missed.  I did figure it out and took it a second time.  I guess I kind of cheated.  You can rap me across the knuckles if you like.

Klugewicz:  We won’t do that.

Mike:  You and your questions that we don’t like, what’s with the Wilson questions now?

Klugewicz:  That question doesn’t shed a good light on Wilson, does it?

Klugewicz:  Is that the one you missed?

Mike:  I can’t recall.  I almost missed the Woodstock question.  I don’t want to give the answer away, but I had to think back and look at the selection and go: All right, there’s only one of them that still is a nutjob, so I’m going to choose the one that’s still a nutjob.  The rest of the questions, though, I’m glad you threw some of the trivial ones in about our anti-cult, because I think it’s one of the more important things to discuss.  What was the thought process behind Real History Quiz #2?

Klugewicz:  Well, we like to make them fun, and certainly diversity of types of questions.  We did have one on the Academy Awards.  The films are all historically based, so it ties into history, but, of course, history encompasses everything.  You have cultural questions, literature.  We have an Edgar Allan Poe question in there.  Like I said, the Academy Awards question, the Woodstock question.  It’s a mix but mostly political, lots of presidents, laws, things like that.  We like to make it fun.

Mike:  I will tell you, folks, it is a horserace on one of the presidential questions.  I got that one right, but only because I had recently read about that.  When I went back and looked up the answer just to make sure I had it correct, between two of the choices, there was only a separation of maybe four years or so.  The quiz is a great way to test a little of your historical knowledge.  Again, you can take the quiz today, Real History Quiz #2, at FranklinsOpus.org.  It’s up in today’s Pile of Prep.  It’s 20 questions, right, Steve?

Mike:  It doesn’t take long to get to the bottom of the quiz.  Then post your score up there and see how well you do.  While we have Dr. Klugewicz on the line from FranklinsOpus.org, you are a historian.  You have a couple initials after your name that I don’t.  Can you make any sense of, is there any precedent for this type of a “government shutdown,” or as I like to call it, an interruption of unnecessary and unneeded services?

Klugewicz:  Often we teach to say NMF, not my field, to get out of answering the question.  It’s happened before several times.  I’ve been reading a little bit recently.  I think the important thing to think about is what the founders thought about government.  We weren’t supposed to have Congress in session year round.  At the beginning it was a few months of the year that Congress would be in session.

Mike:  Why else would they specify a date for it to begin?

Klugewicz:  Exactly.  This idea that we’re in a crisis, it’s horrible, the government’s not doing anything, this would not have alarmed the founders at all.  Of course, I’m sure you’ve been talking about the imaginary money that’s used by Congress anyway.  I think a lot of people see through this as a ruse and all about politics, a blame game.  They’re just playing with imaginary money at this point anyway.

Mike Church Show Transcript – Is Obama Really The Most Tyrannical Of All Presidents?

Klugewicz:  Definitely.  At the beginning of the founding of the country, or the so-called founding, with the Constitution, the idea of a single executive was controversial because it was reminiscent of a king.  Probably a single executive would not have been created except that this man, George Washington, was sitting there at the constitutional convention and everyone pretty much knew he was going to be president.  That’s probably the only reason the delegates to the convention decided we’ll have one president.  There was a whole debate over what to call him.  John Adams, who was more aristocratic than many of the delegates, had some lofty titles, His Highness, the Protector of the American people.  What we were going to call the president was controversial.  People, except for John Adams, didn’t really want a lofty, princely sort of title.  Eventually you get the title of simply President of the United States.

Mike:  If you’d like to read this, folks, in David McCullough’s book John Adams, he actually recounts the story that you just told.  It was in the first days of the new senate being convened.  Of course, Adams being the vice president, he was charged with presiding over the Senate, which he later would say was the most thankless, useless job man ever created or devised.  Adams is sitting there and he’s only supposed to cast a tie-breaking vote.  That’s really the only thing the Constitution tells him he has to do, unless the president dies in office, of course.  So he’s sitting there and he’s basically filibustering.  He’s lecturing the senators on what they ought to call the president.  He’s telling them they ought to actually write a bill and pass a resolution proclaiming him his His Excellency or His Highness, or whatever.  I can’t remember who it is, but some senator finally gets up and says: Dude, you need to shut up; you don’t have a voice here.  He gets so upbraided that he never opens his mouth again for the rest of the term other than to say the ayes or nays have it.

Klugewicz:  And for John Adams to shut up was a pretty big deal.

Mike:  Dr. Stephen Klugewicz is on the Dude Maker Hotline.  We are administering the test today, Real History Quiz #2.  You can find the link to take it at MikeChurch.com at today’s Pile of Prep, or you can just go to FranklinsOpus.org.  Time is running short.  I want to get another part of what you guys are doing at Franklin’s Opus in here, that is these videos that you’re making.  You’re going about the countryside looking for intriguing people with intriguing stories to interview.  You stumbled upon someone, and I’ll have you describe it, that has an interesting story to tell about President “Honest Abe” Lincoln.

Klugewicz:  Dr. Philip Magness of the Institute for Human Studies in northern Virginia has written a book called Colonization After Emancipation.  It’s about Abraham Lincoln and his desire to remove freed African-Americans and really all African-Americans, remove them from the United States and send them back to Africa or Central or South America.  Dr. Magness is a great young scholar.  He really was the pioneer in finding letters that Lincoln wrote to the British government at a much later date than any biographer of Lincoln ever thought possible.  To his dying day, Lincoln kept up this idea that colonization had to be tied in with emancipation.  This has been really groundbreaking.  Dr. Magness is very articulate.  There are three videos on our website where I interviewed him.  You can go to our website to the video collection and watch them.  They’re truly fascinating.  Most Lincoln biographers, probably all, said Lincoln gave up on this colonization idea as soon as the Emancipation Proclamation was issued January 1, 1863.  Dr. Magness has found that is not the case, that Lincoln kept up this idea that he could really only imagine a white America, that once blacks were freed, they had to go.  According to Lincoln, the two races would not be able to live together.

Mike:  Quite an amazing story.  Again, you can find the video at FranklinsOpus.org.  Go and take the history quiz today, Real History Quiz #2.  As always, Professor, a pleasure.  I look forward to seeing those results underneath Real History Quiz #2.  Folks, send your kids to go take it.  If you want a real eye-opener, send your kid in college today studying American History, send them to go take it and watch them get a 58.  Stephen, thank you very much.  We’ll talk again real soon.  I appreciate the video and the work you guys are doing.

Klugewicz:  Thank a lot, Mike.  Have a good day.

Mike:  Go take the Real History Quiz #2 at FranklinsOpus.org or in today’s Pile of Prep. 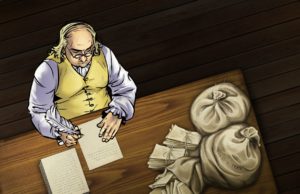