Mandeville, LA – Exclusive Transcript – We do have laws around here.  In emergencies, this is when you most want the protections of civil liberties and when you most want due process.  We’re told we don’t want vigilantes running around seeking justice, right?  Why should government be able to act like a vigilante?  That was the only point that I was trying to make.  I did not second guess Mayor Menino’s motives.  I did not second guess Governor Patrick’s motives.  I did nothing of the sort.  I simply asked for a citation, which I still have yet to see or receive.  Check out today’s transcript for the rest…

Mike:  I live here in Louisiana, a backwoods, backwater burg according to many of you supreme, almighty and legal-precedent-following Northerners.  We’re a bunch of knuckle-dragging, Neanderthal, hick, hayseed, racist, xenophobic bigots around here.  We care about as much for due process and the process of the law as ladybugs on the 18th green at Augusta do.  So I say let me just do a simple Google search.  I will search for the following: Executive Order curfew Hurricane Isaac.  Gee, over 1 million hits.  Maybe I should view them.  Yes, let’s view some.  You can do this with Hurricane Isaac; you can do it with Hurricane Leo; you can do it with Hurricane Katrina.  Name your hurricane that has hit Louisiana, the coast of Louisiana, and in this state anyway, you will find something that resembles this: this is what I was talking about.

I wasn’t asking for the world to be changed.  I was simply asking for an acknowledgment.  We do have laws around here.  In emergencies, this is when you most want the protections of civil liberties and when you most want due process.  We’re told we don’t want vigilantes running around seeking justice, right?  Why should government be able to act like a vigilante?  That was the only point that I was trying to make.  I did not second guess Mayor Menino’s motives.  I did not second guess Governor Patrick’s motives.  I did nothing of the sort.  I simply asked for a citation, which I still have yet to see or receive.  Perhaps it’s happened and I just haven’t seen it.  I did put a Google alert in to notify me of “executive order, Deval Patrick.”  I was not alerted yet.  I didn’t search for it this morning.  I did search for it Saturday and didn’t see it.  Let me just share this with you.  This is from the 29th day of August 2012.  I believe we were in — when were we in Tampa, Florida for the RNC?  That’s about right, isn’t it, 29th of August, somewhere around there?

AG:  Yeah, I think right about then.

Mike:  Hurricane Isaac was going to clobber the convention center where we were on Monday, right?  We watched the storm passing by outside.  I think it hit the Louisiana coast on Wednesday.  This is what I have here: St. Tammany Parish Government — that’s the parish that I currently reside in; you call it a county where you live; I call it a parish here — Emergency Operation Center Executive Order.  Gee, I wonder what that might be.  Remember, this all happens in real time, this while people are preparing to get out of harm’s way with a hurricane bearing down on them.  The parish president, I suppose, could call a Patrick or a Menino and just say, [mocking] “Hey, get out of town.  You’re on lockdown.  You can’t leave your house because I said so.  It’s an emergency.  There’s a nor’easter blowing in.”  Instead, Patricia Brister, who is the president of St. Tammany Parish, issued the following.  I want you to pay attention to the language.

Whereas, on August 26, 2012 St. Tammany Parish President, Patricia P. Brister, declared a parish-wide state of emergency due to the effects of Hurricane Isaac; and

Whereas, as a result of the impact and eventual landfall of Hurricane Isaac, Patricia P. Brister, as Parish President of St. Tammany Parish, heretofore invokes all rights and duties afforded her under Louisiana Revised Statute 29:721 et seq. and all other applicable statutes and regulations, until further notice; and

Whereas St. Tammany Parish Government, through Patricia P. Brister, as Parish President, is empowered to take all necessary measures to ensure the continued safety, health and welfare of the citizens of St. Tammany, as per law; and…

Mike:  You can read the rest of it if you like.  I posted it in today’s Pile of Prep.  If you don’t believe me, you can go read it and see for your own two eyes.

It is ordered that ingress and egress to and from and movement of persons during the above mentioned time period will be controlled; and [Mike: This is starting to sound really familiar here, isn’t it?]

It is ordered that any person or entity who interrupts or interferes with this order, the control of the Parish and/or Parish President shall be prosecuted to the fullest extent of the law.

It is further ordered that this Executive Order extends from Wednesday, August 29, 2012 through Thursday, September 28, 2012, unless terminated earlier.

Signed Patricia P. Brister at the Parish of St. Tammany appearing before a judge. [Mike: There’s a judge’s signature that I cannot read.]

Mike:  [mocking] “Mike, what’s your point?”  It’s a very simple point.  In an emergency — and this happened in many other parishes.  I just happen to live in St. Tammany so I Googled my own parish.  The citizens of this parish, like that, drop of a pin, were notified that there is a substantial threat to public safety for people to be out between these hours.  We are invoking a statute that we have on the books for this specific purpose.  We are asking that the citizenry acknowledge that they have heard this and they are going to abide it.  If we need to, we can enforce it by law, because it is a law.

To my knowledge, ladies and gentlemen, and I wasn’t here — I was actually in Tampa with Andrew at the time; my family was here.  To my knowledge, these orders are, by and large, acknowledged and obeyed.  Everybody knows don’t leave the neighborhood.  We have a very close-knit neighborhood, little community where I live.  People gathered together, counted resources, generators and what have you — and they all came in handy — and rode the storm out while the curfew was in effect.  My only point is that the government, in respect for the citizens, said: Look, these are rare and extreme measures we are going to take here.  We are authorized to take these.  There is a law that we are going to cite to take these.  We’re going to keep it in effect until such time that public safety will admit that we can rescind it.  Again, unless I missed it — but I did look for it and still look for it — there was no such effort made in Boston.  We’re talking about a city of millions and millions of residents.

If you were watching this on television — I sat here at the end of the program on Friday.  I sat here and I counted a column of 25 armed, camouflaged-up, Humvee armed personnel carriers of some sort that were going down some street in Boston in pursuit of what ultimately turned out to be a kid who was hiding underneath a tarp in a boat.  These images are still impressed onto my mind, I don’t know about the rest of you.  Did you witness and see the military-style — what do I call this thing?  It’s not an armed personnel carrier.  I guess it’s some sort of SWAT attack vehicle.  There were several of these that were shown and sighted in different areas.  There were several of these and they were painted black.  They also resembled a tank.  Out of the top of the vehicle, there was some kind of escape hatch or hatch.  Out of the hatch, there was a guy, I assume he was a SWAT officer or member of the SWAT team.  He was dressed in all black as well.  There was a mounted .50 caliber gun, turret-like thing with bandoleros of bullets hanging off the side.

There were all manner of militaristic-looking vehicles and deployments and what have you as they went house to house and door to door in this wild manhunt to obtain the apprehension of Dzokhar Tsarnaev, which, again — I have a couple rundowns on this as the events actually transpired — the martial law lockdown did not produce Dzokhar.  A guy who was worried about his boat produced Dzokhar.  All the while this is going on, there was no acknowledgment whatsoever, again that I’m aware of — I apologize if I missed it — that the government in eastern Massachusetts gives a rat’s furry behind about any manner of due process.  I started thinking about this.  You can do the old put shoe on other foot test and see if this would stack up if the circumstances were changed, and I don’t think it does.  It’s worrisome.  Just the size and the swiftness with which the police state can be invoked and called out, and with the armaments thereto, my lord.  It was amazing to watch in one instance and very unsettling to watch in another. 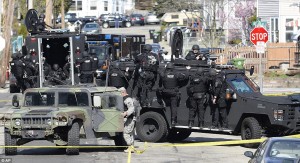