Attorney Generals Play By Their OWN Rules

Mandeville, LA – Exclusive Transcript – “What they are actively doing is they are removing, they are piece by piece dismantling the sovereignty and the existence of other bodies of governance.  They are making it so that a state can no longer — you used the term abrogate.  They are abrogating the actions of the people through their state legislatures, through their ballot initiatives.  They are abrogating republicanism.”  Check out today’s transcript for the rest…

Mike:  I thought we were always talking about “the greatest country in the history of Earth,” wherein I have explained to you today, through the story with the NFL and now through this one:

Attorney General Eric Holder has given the nod to his state counterparts that they do not have to defend laws against constitutional court challenges if they consider them discriminatory — effectively giving the green light for states to stop defending bans on gay marriage.

Mike:  This is an assault on the sovereignty of the states and of state legislatures.  Virginia is already having to deal with this.  I asked a member of the Virginia Assembly, the Commonwealth of Virginia, what he intended to do with his attorney general who is refusing to acknowledge that the Virginia Constitution was amended in 2008, Amendment 15A was added to the constitution, in a very rigid manner, defining what a marriage is.  There is no definition or no use of that definition that would ever apply to Stan and Dan, to Laurie and Janie. Not going to happen.  Virginia did this intentionally.  The voters approved it intentionally.

It’s part of the constitution.  The new attorney general says: I thought about it; I don’t like it; I’m not going to enforce it.  He therefore is in violation of the oath of office he took to uphold the Virginia Constitution.  Now the Attorney General of the United States, Eric Holder, is saying: Hey, the rest of you attorney generals, if you don’t like your state’s bigotry when it comes to homosexual unions, ignore your state.  Just pretend like they never legislated.  In other words, the federal or the national legislature is now assuming total or is mimicking total sovereignty.  It is now saying that it is the only authority in North America when it comes to the most intimate affairs of the people inside the states.

Folks, I’m going to ask the question again.  If the Congress isn’t going to smack Holder down and isn’t going to drag this guy in there and make him explain under what authority he is telling — he’s basically telling the attorney generals of the states that they should commit sedition.  They should violate their oath of office and they should seek to undermine the affairs of the state they were elected to lead the laws and execute the laws of.  That’s got to be — you lawyers out there, help me out here.  That has to be a felony of some sort.  There have to be states that have something on the books that say: Attorney 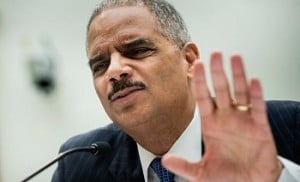 General, you can’t do that.  [mocking] “We’ve got a legislature here.  We kind of make the laws.  Follow me here, work with me.  You kind of enforce laws, right?  See, that’s kind of what you were elected for, right?”

So the Obama administration is basically now saying, not basically, they are saying there is no sovereignty outside of us.  We are sovereign.  We are kings.  We are The Government.  We are telling the other little people government, our agents out there, that you don’t have to obey those idiots that call themselves the legislatures.  You don’t have to obey those imbeciles that call themselves The People and pass these ordinances, laws, amendments and constitutions and what have you to prohibit acknowledgement of homosexual unions.  You don’t have to do any of that.  I said that you can disobey them.  Well, who is Eric Holder?  Who gave him the authority to command an officer of the State of Virginia, an officer of the State of Arizona?  You people in Arizona elected that clown; Eric Holder didn’t.  Why is the attorney general doing this?  Why?

I can’t explain the why.  I can explain that it’s wrong.  I can explain that again, because the states have become so useless and have become so weak and perceive themselves to be so weak — is any state going to take the stand that I just counseled.  Is any state legislator, do you guys have the courage of the oath of office that you took, the courage of your convictions to rise up?  If your state attorney general decides that he works for Eric Holder and not your state, he works for Barack Obama then because Holder doesn’t do anything without Obama telling him that he can.  What are you going to do?  Are you going to impeach or are you going to lay down in the middle of the road and say roll me, baby?  Kenny in Florida is next on the Mike Church Show on the Sirius XM Patriot Channel.  How you doing?

Caller Kenny:  I’m doing fine, Mr. Church.  Good morning to you.  I’m an attorney.  I agree with many things you say.  I disagree with many things you say.  That’s the way America should be.  But when I read about what Holder was doing, and when I was listening to what Holder was doing, my jaw dropped as an attorney.  Holder is engaging in a course of action that it so dangerous to our country.  It totally abrogates the concept of separation of powers.  It is dictatorial. Unless this is stopped, unless it’s checked, our liberty is in danger.  I’m not overstating it, I’m really not.

Mike:  I don’t think you are, Kenny.  This is dangerous.

Caller Kenny:  It’s extremely dangerous and he needs to be impeached.  He needs to be brought before Congress.  He needs to be impeached.  If our representatives, the people that work for us in Washington don’t do something about this, then we’re lost.  What we need to do is we need to contact our respective representatives and express this shock that apparently the Obama administration is making a push, piece by piece by piece, to take our freedoms away.

Mike:  Kenny, you’re an attorney and you argue these things, it sounds like, in courts of law.  Let me, the amateur, help you out for a moment.  It’s not taking the freedoms away.  What they are actively doing is they are removing, they are piece by piece dismantling the sovereignty and the existence of

Caller Kenny:  It is soliciting sedition.  It’s, in my opinion, truly illegal behavior.  It’s emasculating states’ rights.  It’s taking the legislative, the executive, and the judicial and wrapping it up into one aspect of government, the executive.  They used to call that a king.

Mike:  That’s exactly right.  Kenny, I’ve got to go.  I’m out of time, but I’m glad that you called.  Thank you very much for helping me out with the lawyerly part of this.  Folks, this is why this is the top story in today’s Pile of Prep.  It ought to be the number one story.  Lose all your other Facebook stuff.  Yes, we talked about the Arizona case because I believe that that’s similar, because Arizona is telling the Arizona attorney general, and he’s basically telling Jan Brewer: Ignore your legislature.  In other words, ignore the people.  Ignore the sovereignty of the people.  And ignore your oath of office.