Mandeville, LA – Exclusive Transcript – Santorum doesn’t trust the Christians around them to govern themselves.  Instead, in too many instances, he seems to think that there is some kind of constitutional and Godly purpose in establishing — you heard him say, “Mitt Romney is for reforming these social programs.”  Reform them?  The programs themselves are an affront to Christian charity.  I’m going to go over this again really quick.  It’s not my place here to preach and bring Catholicism to you, but let’s just do it for a moment. Check out the rest in today’s audio and transcript…

Mike:  I didn’t see this in any of the stories.  Did they restore the plank to eliminate the Department of Education?

AG:  I do not believe that’s in the plank.

Mike:  Okay, because Santorum just — I can’t do Santorum, so I can only do Boehner.  [mocking Boehner] “Governor Romney is committed to schools being private and run locally and returning the power to the local people.”  If you’re not going to eliminate the DOE, how are you going to do that?

AG:  It was one of the interesting things.  I was on Twitter following a bunch of tweets while watching the speeches last night.  Tim Carney from the Washington Examiner, who we have on a lot, had one of the more interesting tweets on the Santorum speech.  It was, “I have been one of the biggest opponents and critics of Santorum, but I do respect and emulate him as a husband and father.”  I thought that was a good way to put it in that Santorum seems like a great family man by all accounts.

AG:  I agree with Tim in the sense that he makes that next step to legislating and growing government in these social policies, which I just don’t think is where —

Mike:  This is where the obedience to the unenforceable comes in.  This is where if you really are a Christian gentleman, as I strive to be on this show and as it seems like Senator Santorum strives to be — to be clear, I’m not a supporter of Senator Santorum, but I’ve always at least tried to be respectful of him, even though I think he’s the loose cannon, not Congressman Paul, in many of those debates.  Santorum doesn’t trust the Christians around them to govern themselves.  Instead, in too many instances, he seems to think that there is some kind of constitutional and Godly purpose in establishing — you heard him say, “Mitt Romney is for reforming these social programs.”  Reform them?  The programs themselves are an affront to Christian charity.  I’m going to go over this again really quick.  It’s not my place here to preach and bring Catholicism to you, but let’s just do it for a moment.  I think it will illuminate some of what we’re talking about right now.

When Jesus Christ said to those that were gathered in that parable, “Feed the hungry, care for the sick and clothe the naked,” he didn’t tell you to hire Caesar to do it.  He didn’t tell you to go into the temple and find a government to do it.  He told you to grow the food, find a sheep, butcher it, serve them the mutton and then take the sheep’s wool and make it into clothes.  If they’re sick, he told you to care for them.  He didn’t tell you to go find the Red Cross; he told you to do those things.  The essence of that part of the Catholic canon, and of the Christian canon as it should be because the Catholic Church was the first Christian church and is The Church, is that you do these things as part of your Christian life and your attempt to walk closer to God.  What does government have to do with any of that?

You can disagree, “Mike, I’m not a big Christian, so I’ll leave that to you and Senator Santorum.”  That’s fine.  I can respect that and anyone that would say that.  What I don’t respect and what I resent is this idea that [mocking] “It may not work out in some instances, so we have to have the government do it.”  Why?  They screw everything up.  Then they ultimately wind up doing it for what?  To maintain power and to redirect resources.

AG:  It seems to be shifting the focus of what we’ve talked about, and you’ve really hammered it on your three principles that the RNC should be about this week: jobs, unemployment, energy?

AG:  Christie did some of it, but also as you were saying, in his speech last night, he did a lot about Democrats believe in government and we believe in this, but it’s still government.  Santorum was a lot about how government can make the family life stronger, or how we need government to do this for the people because that will grow the community.

AG:  It was less and less.  I really didn’t hear any energy discussion yesterday.  Maybe that’s somewhat hard to do on the platforms.

Mike:  Maybe today.  The energy discussion is propaganda, this stuff about [mocking] “We’re going to have energy independence by 2020.”  What is that?  You’re always going to have — what exactly is the harm in buying oil from Canada?  What’s the harm if you have to have ethanol, which we shouldn’t have by force?

AG:  But you’ve liked Romney over the past couple days saying I’m going to give it back to the states, power and control.

AG:  Is that too policy, wonky, nerdy for him to talk about on the stage on Thursday night during this acceptance speech?

AG:  I think you need to give him a pep talk before the speech, “Hey, in 20 seconds, all you gotta do is hammer this.”

Mike:  Maybe he can get Boehner to do it. 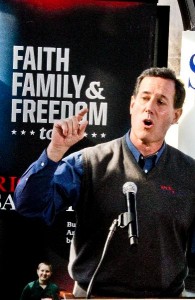 Here’s a good GK Chesterton talk on this http://youtu.be/EYQL0ENXLno