Why The NSA Does What It Does

Mandeville, LA – Exclusive Transcript – “Where is the money going?  In order to execute all these things we’ve been talking about, the quantum theory program, the PRISM program, the MYSTIC program revealed earlier in the show today, thanks to Edward Snowden, and all these other acronym programs.  Someone is writing an ass-ton of software, ladies and gentlemen.  Someone is writing a buttload of software.  They are writing uncountable amounts of computer code.”  Check out today’s transcript for the rest…

Mike:  I want to focus your attention for just a moment on the why.  We’re all fixated on the how, how nefarious and disgusting and unconstitutional and internationally illegal all this stuff is.  Granted, yes, yes, and yes.  We need to focus on the why.  I don’t pretend to believe that Glenn Greenwald is a listener to this broadcast, but perhaps through the grapevine Glenn Greenwald and journalists like him can be inspired to do what it is that journalists do, which is to find out the following.  Where is the money going?

In order to execute all these things we’ve been talking about, the quantum theory program, the PRISM program, the MYSTIC program revealed earlier in the show today, thanks to Edward Snowden, and all these other acronym programs.  Someone is writing an ass-ton of software, ladies and gentlemen.  Someone is writing a buttload of software.  They are writing uncountable amounts of computer code.  There are contractors that are doing this, software contractors, who are being awarded billions upon hundreds of billions of dollars of Defense Department contracts to execute this.  This is the crime.

Let’s walk through the crime.  The citizen, you and me, is taxed.  Our wealth is stolen from us at the point of 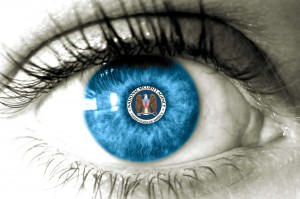 the IRS’s gun barrel.  It is stolen from us from other despicable means like sales taxes and excise taxes on things that Congress should have no authority to tax.  It is stolen from us by the devaluing of our currency.  It is stolen from us in all manner.  It is transferred to Mordor through its various agents and through its central bank.  Then it is appropriated abstractly by a Congress that says: Go surveil the world and protect the American people.  From there, congressmen must be secretly lobbying or software and other hardware development firms that are in their districts and in their states to receive the top-secret contracts that are executing the quantum theory program, which is the one that pretends it is a Facebook server; the MYSTIC server, which is the one that confiscates all the phone calls of five separate countries for 30 days; the PRISM program, which you’re all aware of; and the other nefarious acronym programs.  Someone is doing the designing.  Someone is hiring the contractors to do the designing.

Do you know how we know that this is being jobbed out?  Edward frickin’ Snowden, man, that’s how we know.  What was Snowden?  What was he doing?  He didn’t work for the NSA.  He worked for a contractor.  He was a subcontractor.  This is the deceit and the crime.  This is why John Taylor of Caroline County warned us in 1813 about a tyranny unmasked, that once Congress got wind of or began using and utilizing its power to tax, it would figure out new ways to spend.  It would figure out new ways to spend that were not constitutional and were non-productive.  They were only productive inasmuch as they contributed to the immediate personal and private wealth of very well-connected people.  Rinse and repeat the process.  It’s been going on ever since.  This is just the latest iteration of it.  They had to figure out how to award hundreds of billions of dollars in free government bailout cash to contractors that were in new cyber businesses, that were in software businesses.  The old brick and mortar, the old steel manufacturing contracts that used to be awarded to build bombs and tanks and stuff, we’ll just redirect some of that into our new buddies, our new pals that are building and designing things.  They’re just not doing it with steel, not in the sense that you would use steel to build a tank or a plane.

Folks, at the end of the day, the NSA is cover for a massive transfer of wealth.  Always follow the money.  Are there men, little tinhorn tyrants along the way that desire the power that they can wield by what the NSA is doing?  Yes, of course there are.  The reason why it is happening is to mask the transfer of wealth.  That is the end result of this, that wealth is transferred, from me and you, fair listener, to the software developer who will pay a guy like Edward Snowden.  End of story.  Close the book.  Let’s proceed to the next tragedy, shall we?  This is what the Feds to in agriculture.  It’s what they do in the drug business, which is why we have to have a police state to police and lock up any competition for the “legal pharmaceutical industry.”  [mocking] “You’re not legal.”  Yeah, right, because the guy that’s selling the marijuana, yeah, he’s executing people like the guys that sell Vioxx.  Good grief.  All these things are cover.  They are the tyranny unmasked in Taylor of Caroline’s phenomenal book.  It’s difficult to read but well worth the effort.  This is exactly what is afoot here.

How do you propose, by sending new and more better members of the Tea Party to Congress, to end that?  I’m going to tell you and counsel you that you are running a fool’s errand.  You’re not going to end it.  The people that are connected and receiving the hundreds of billions of dollars, which amount to trillions over

years, are not going to surrender the grift.  They’re not going to give it back.  They’re willing to kill people and do unbelievable, unthinkable things in order to keep it.  How then is this battle to be won?  Folks, make no mistake about this, this is costly to you and to me.  Our purchasing power and the kind of lives that we could lead with the possession of the fruits of our labor, like our ancestors had, somewhere around 95 percent or so, has been seriously encroached.  The portion of income that you and I are allowed to keep is miniscule.  It pales in comparison to what was kept by someone who may have been able to be a single earner and support a family with an equal or even better standard of living, and I would say part of that standard of living is the leisure activity and the amount of time you don’t have to spend working.  We’re all working more hours than we ever imagined we would have to in order to do what?  In order to continue that transfer of wealth.

It really is sinister and it really is all about money.  It always is.  The deceit that’s being carried out in the name of national defense is just made that much more despicable by the revelation, or by the rediscovery that this is all just a scam being perpetrated on the citizen.

How do you get rid of this?  To coin an old phrase, and I hate to be the pessimist in the room, but you just gotta start over.  This must come to an end, it has to.  We have to be brave and courageous enough to form new federations and new alliances where we can reset the table and reset the cards that are being dealt, and try to get these things at least back into some sort of human scale.  Just deal with the inevitability that the current union under which we, I would say suffer, is not going to look like it looks today.  So what?  Who’s to say that the new federation and the new union doesn’t promote and defend human liberty and human freedom and Christian charity in a way unforeseen in the history of the world?  This is just so crooked.  If you stop and think about it for a moment and believe what I’ve just said, it should make eminent common sense.  Occam’s razor, you look for the simplest explanation of something and that’s probably what explains it.  I just gave you what I think is the simplest explanation of why the NSA is doing what it’s doing, and why it’s being charged with the task, and why so many are in on the grift and on the cover-up.