Mandeville, LA – Exclusive Transcript – So the big story this week was that the polar ice cap, the Arctic ice cap, has expanded to where it was in 2011 and then increased by about 60 percent, in other words a lot more ice has formed.  People are scratching their heads and trying to figure this out.  Check out today’s transcript for the rest…

Mike:  Let me get back and finish this conversation up with Travis in Texas.  Okay, Travis, so during the timeout I looked this up.  According to NASA’s Geographic Interspatial Satellite, GISS satellite, the planet has indeed shifted about eight feet on its axis thanks to the 2011 earthquake.  You are correct.

Caller Travis:  What I’m looking at on the axis, eight feet could be hundreds or even thousands of miles here in the center where we’re at.  That’s why you’re seeing more hurricanes on the East Coast.  I ran into snow in Alpine, Texas, which is right on the border of Mexico and Texas on US 90 back in May of last year.  I was just trucking on across there and the temperature on my temperature gauge dropped and there was snow coming down.  It was 46 degrees and still snowing in May down in Alpine, Texas.  I have just noticed the shift in the weather and everything.

Mike:  I wouldn’t deny, and I don’t know the specifics of where it is you speak, but the Earth being part of a solar system, it’s a speck of dust on a football field, to try to put it into scale, throughout just this galaxy, the Milky Way.  The numbers it takes to describe the distances and how wide and vast it is are mind numbing.  They’re incomprehensible.  It’s almost like trying to comprehend the United States federal budget deficit, which is going to come in at $770 billion this year, by the bye.  A mere drop in the bucket, though, we’re told, because [mocking] “It’s less than a trillion.  You guys should be thankful.”  Oh, yeah, my children will certainly thank you in ten years.

To the larger point, the big news story this week, if you follow this sort of stuff, other than Syria, other than Obamacare — that was another thing from yesterday, the president saying: If you send me anything that tries to defund Obamacare, I’m going to veto it, meaning he’s trying to tell the Congress and the conservative revolt in Congress that you’re not going to get away with defunding Obamacare.  If I were a member of the House of Representin’, I’d tell the president: You don’t get to spend the money, pal.  All you can do is veto it.  If you want to veto all those poor children’s benefits and all these other things, we’re going to hold you responsible for it.  Anyway, I’m getting off the subject.

So the big story this week was that the polar ice cap, the Arctic ice cap, has expanded to where it was in 2011 and then increased by about 60 percent, in other words a lot more ice has formed.  People are scratching their heads and trying to figure this out.  It sounds to me, Travis, like you’re trying to pin it on the earthquake, and that may be true.  It may also just be true that there are many factors, all natural, all organic, all celestial, that have great bearing on the Earth’s climate.  I don’t see why this is so difficult for people to comprehend, and why we automatically kneejerk react and think that man is to blame for this.  If you think our solar system is a speck in the Milky Way galaxy, what is an individual man inside that speck?  The idea that we have some kind of control over what the rest of the big planets are doing and what have you, I think, is just another indication of our arrogance.

Caller Travis:  You’re exactly correct.  I watch all this stuff with the weather changing.  I’m a truck driver, so I got to keep track of all this stuff.  I’m just noticing how everything is shifting, the sun is coming up in a different area.  People go: That’s just because of the season.  I say: No, if you pay attention, it’s like that all year round.  It’s coming up in a different area.  It’s not where it used to be.  Then after the earthquakes, there’s been more seismic activity in Yellowstone Park.

Mike:  You don’t even want to talk about that, brother.  You know what a caldera is, Travis?

Caller Travis:  I have not heard that one.

Mike:  It’s an underground — it’s a volcano that’s about to happen.  It’s below the surface and it’s massive.  The caldera that is underneath what you call Yellowstone Park is one of the largest ones on Earth.  If it ever decides to blow, we’re all dead.  It’ll be a dinosaur extinction event.  There will be so much ash thrown into the atmosphere that organic animal life will probably not survive.

Caller Travis:  They have been keeping track of it and there has been more seismic activity going on in Yellowstone Park for the last three years.

Mike:  If that caldera ever goes — people that live up in that area are probably thinking right now: I should call in because there is a lot of strange activity up near Yellowstone.  It’s very dangerous.  We convince ourselves that we can control all these things.  We don’t have any control over these forces.  This is not a science fiction movie.  If that joker is going to blow, it’s going to blow.  I should say in a geological sense of things — you geologists out there know this — when that caldera goes, it’s not a matter of if, it’s a matter of when.  Travis, I appreciate the call.  Good conversation, buddy.  Thank you very much.

I looked this up during the break because I’m fascinated by this stuff and sometimes I just get sick and tired of talking about politics every day.  There are three things that have great bearing on this spinning ball in space that we call Earth, three scientific factors or geometric factors.  One is precession, that is the angle at which the Earth’s axis is.  One is obliquity.  Just think of a spinning top.  When you first spin it, it’s nice and smooth, looks like it’s really round.  Then when it starts to lose its inertia, it starts to wobble from side to side.  That’s obliquity.  Then the third is eccentricity.  Think of eccentricity as a perfect circle has no variance of any degree at any point in the line; it’s a perfect circle.  You can add degrees.  If you have a graphics program like Photoshop or Illustrator or Google Draw or something like that, you can make a circle and then you can select it.  In the change box, you can put degrees in.  You can just put zero in there and go up one degree at a time.  Then you can see the circle starts to become elliptical.

Those are the three factors that have to do with how the Earth rotates around the sun, which is not always the way it is.  It changes from time to time.  This is what causes glacial periods.  Right now we live in an interglacial.  That’s a good thing.  You want to live in an interglacial.  You don’t want to live in a glacial period.  As a matter of fact, you probably won’t live in a glacial period.  There are cycles called Milankovitch cycles.  They happen every 20,000 to 22,000 years.  You can’t stop them.  It is going to happen.  What this basically means, when a Milankovitch shift occurs, right now it is fall in the northern hemisphere.  After the Milankovitch, in September it will be spring.  It just flips, reverses.  Fascinating stuff, folks.  We tend to think that the Earth is this perfectly round little ball that makes its perfect little round circle around the sun every year and never alters itself.  That is not the case. 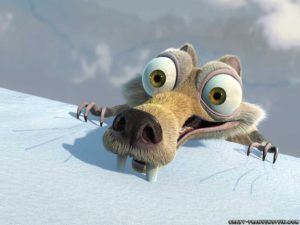 Reviewing The US Conference of Cowardly Bishops – The Mike Church Show