Mandeville, LA – Exclusive Transcript – Good freaking grief.  Let me translate that.  A Senate panel has voted to tax you on your way to work today so you can buy Achmed, a Syrian rebel, a nice, shiny, new M16 with a full — here’s the bonus: I bet the Syrian rebels will get the extended clips that American patriots aren’t supposed to get because we might do evil, despicable things with them.  You can’t have an assault weapon Achmed can.  Good grief.  Check out today’s transcript for the rest…

A Senate panel has voted to provide weapons to rebels battling the regime of Syrian President Bashar Assad.

Mike:  Good freaking grief.  Let me translate that.  A Senate panel has voted to tax you on your way to work today so you can buy Achmed, a Syrian rebel, a nice, shiny, new M16 with a full — here’s the bonus: I bet the Syrian rebels will get the extended clips that American patriots aren’t supposed to get because we might do evil, despicable things with them.  You can’t have an assault weapon Achmed can.  Good grief.

The vote by the Foreign Relations Committee on Tuesday marked the first time that lawmakers have backed the aggressive military step of arming vetted opposition forces.

Mike:  Question: If you then are supplying weapons to someone that is fighting a war with a — the Assad regime, you may disagree with it.  You may not like it.  You may like it.  Fine, I’m not telling you that you shouldn’t.  They are the officially recognized by the United Nations and the international community, they are the government of Syria.  What we are doing is we are assisting in the treason and traitorous activities of the opposition.  In other words, we are now making war on Syria.  If those weapons are going to be used and are going to be fired at troops that are in the employ of the Syrian government, regardless of the condition, then the United States is now at war with Syria.  And you wonder why we can’t stop the hatred and the violence that comes our way from people in the Middle East and the rest of the planet that are tired of us meddling in their affairs, besides the fact that me and you have to pay for all this.

The fate of the bill is uncertain as many members of the House aren’t as enthusiastic for U.S. military action in the Mideast nation. The bill comes as the Obama administration mulls its next step on Syria.

Mike:  I said this yesterday and I’ll repeat this, this is just abject stupidity here.  Not only that, in the face of trillion-dollar deficits, where in the world do we get the money?  Where in the world do we get the moxie and the cheek to appropriate these things knowing that in some future year, some yet-to-become-an-adult American citizen (my daughters, your daughters and sons) are going to have to pay for this?  Maybe, just maybe this will be killed by the “conservatives” in the House.  Ladies and gentlemen, this is a prime example, you could say this is Exhibit A, of our bellicosity and foreign policy.

What if there was an uprising, let’s just say in Michigan?  Detroit is pretty unstable these days.  What if there were rebel Detroit forces that did not want the State of Michigan’s new government to come in and take over Detroit?  Detroit is in big trouble these days.  What if they marshal their forces together and decided that they were going to fight the government of Michigan and there was a long, protracted struggle.  What would we say if the Chihuahua district in Mexico shipped arms to the Detroit rebels?  What would we say the Mexicans had done?  Here’s an even easier one: if they had the guns, what if the Canadians did it?  They could get them right across the border there.  What if the Canadians did it?  What would we then say about the Canadians?  We would say, [mocking] “They’re violating international law!  What are you doing meddling in our affairs?  You can’t arm the enemy in an American state.”  Why not?  We do it all the time.  What makes us so special?  Why do we get to do it?  This is the point of this propaganda that so many of you and people that you know have digested and live, sleep, eat, and breathe by, this idea that we can do it because we’re America.  We’re exceptional.  Oh, yeah?  Says who?  Who died and made us King George III?  Who died and made us pope of the world?

It is this kind of conceit and arrogance – folks, foreign policy really is where it is all at.  This is as tyrannical of an effort as the effort to force feed Obamacare or the effort to force feed its version of immigration laws to the State of Arizona is, the big difference being that we’re willing to see that other people are killed in the endeavor.  Of course, you preach nonintervention like this, [mocking] “What are you, a pansy?  You want the bad guys to win?”  Uh, well, apparently the bad guys actually have stabilized to some level or are providing some manner of stability to the country of Syria.  I’m not a Syrian and I’ve never been there, but from everything that I can read, there is at least some — other than this particular internecine struggle — manner of order and peace in that land.  Assad is the second in a line of Assads.  I want to say that papa Assad was also a junior at one time.  I know that Bashar al-Assad became the premier of Syria after his father died.

Folks, this has got to stop.  This has to stop.  Of course, we’re going to be told, [mocking] “This is national security.  We have interests there.”  No, we don’t.  No, we don’t.  We’re making interests there.  What if our newfound buddies the rebels, what if they turn out to be like the nutjob rebels in Egypt that took over?  What if they turn out to be like the Islamic radical nutjob rebels in Libya that took over, you know the ones who stormed the compound in Benghazi?  Heaven forfend another ambassador should be dispatched there.  Heaven forfend we should pursue this the way we pursued it in Libya.  This is the first step.  It’s like a nightmare in slow motion.

If I’m Bashar al-Assad, I’m thinking I’m going the way of Gaddafi.  If you are Bashar al-Assad, would you arm up or arm down right now, knowing that the United States is poised to flex its vast military might in favor of the opposition to the legitimate government in that country?  It’s just sad, folks.  Even if you’re not a fan of the nonintervention, where does the Senate and Congress, where do they derive the authority — I know where they derive the authority constitutionally speaking, and this is a flimsy one.  Where do they derive the moral authority?  We have to be taxed to pay for this.  You wonder why they Pentagon spends hundreds of billions of dollars every year?  It’s got to arm the entire freaking planet. 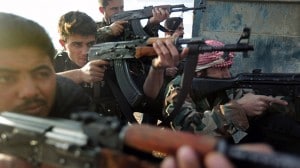