Mandeville, LA – Exclusive Transcript – “For those of you that are free marketers out there, I’m not breaking any news here.  It shouldn’t go unnoticed, though, that as soon as an event like this happens, the first people that want to jump on the accusation train and start hurling all manner of epithet and calumny against those that would raise the price for something like water, it’s usually the same people that have no knowledge of and act in total and utter disregard of the forces of the free market.”  Check out today’s transcript for the rest….

Earlier Saturday, state officials warned residents in Toledo and surrounding areas not to drink the water. News of the contaminated water spread quickly throughout the city of 280,000.

Mike:  There are about a half a million people, by the way, that are affected by this.  This has led, of course, to the ransacking of all available bottled water supplies at any big box retailer or other place where you can get it from.

As truckloads of water came in from across the state, Toledo leaders set up distribution centers at schools around the city, limiting families to one case of bottled water each, AP reported.

Mike:  You know, this comes up here during hurricanes here in the Deep South.  When there’s a hurricane that has either gone through or is going to go through, this will trigger sometimes these calls for crackdowns in what’s called gouging.  We’ve got to get to the gougers.  There are parts of this story here where there are people selling cases of water —

The water shortage brought out the opportunistic side of some Toledo residents as well. Branden Cobb, a 25-year-old studying for his master’s in business at the University of Toledo, said he was on his way to 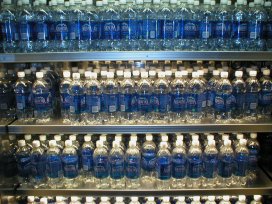 buy water when he found a group of people selling cases for $12 each on the side of the road.

Cases were selling for only $3 each at the supermarket.

“It really is supply and demand,” Cobb told The Times. “I wish people wouldn’t up charge, up price, that. They had a good idea, but I personally wouldn’t do it.”

Mike:  There is an upside to the upcharge, and it’s this: when something is in short supply like this, the most surefire and naturally-occurring way to try and limit the distribution of the supplies so that it finds its way to more people is to raise the price.  For example, when there’s a hurricane here, I can recall after Katrina or Rita or somewhere around there, people were actually arrested for selling bags of ice for $12 each or something to that effect.  What they were actually doing was in ascertaining that those that were going to purchase the ice had more thoughtfully considered their actual needs and how much they could get by with.  If it was just $2 a bag, give me ten of them.  But when there’s a limited amount of supply, only 100 bags, you want to try to see to it that there’s enough ice for everybody to get some.  He would raise the price to $10 a bag.  [mocking] “That’s gouging!”  No, it’s trying to spread the supply out to try and ensure that more of it is distributed to those that wish to purchase it.

For those of you that are free marketers out there, I’m not breaking any news here.  It shouldn’t go unnoticed, though, that as soon as an event like this happens, the first people that want to jump on the accusation train and start hurling all manner of epithet and calumny against those that would raise the price for something like water, it’s usually the same people that have no knowledge of and act in total and utter disregard of the forces of the free market.  It would only follow that when you see something that is actually being freely marketed like this, that it would shock these people.  [mocking] “That’s an outrage!”  It’s only an outrage to the people that wanted to consume or wanted to try and stockpile more than they may actually need.  There’s no way to really gauge this, but the point is that by raising the price, you are then entering into some sort of a rationing system.

How many of you are following the drought out there in California?  Many Californians now are under these orders to not water their — I saw a headline the other day “There’s a war against lush lawns in California.”  [mocking] “We’re gonna find these people with lush lawns and we’re gonna get ‘em.  Where are they getting the water to make their lawns lush?  There’s a drought going on here.”  Well, again, if there is a drought — the way California’s water is managed is inhumane because it is managed to the advantage of some rare and stupid fish or some rare and stupid worm or some rare and stupid rat or condor or whatever the case may be and not to the benefit of the humans that rely on it and have taken up residence in the Golden State and rely on water.

Having said that, we already know that the system there is crocked.  If you wanted to declare and wanted to constrain the use of water — let’s just say you were actually selling the water and you’re a water company for profit.  Well, supply and demand, you would raise the price.  If you’re a water company, you don’t want to run out of water if that’s what you sell.  In order to regulate how much of your water is purchased, you raise the price until — this isn’t an exact science but it does work — until the consumption or purchase of whatever the item is begins to curtail, begins to taper off.  You’ll know then that you have reached a price point that most people are not willing to pay.  Then you may back off and try to regulate this a bit to see to it that you have continued sales.

Ludwig von Mises spent his whole life writing about this.  You don’t have to get this from me.  You can just go get any book by Mises.  There’s an entire institute out there in Auburn, Alabama, the Mises Institute.  Friedrich Hayek wrote about this.  There have been some Americans that have written about

it.  If you want to learn about this, just read some Mises.  This is pure Austrian economic theory here.  To my knowledge, it has not been demonstrated to be a failure in real-world tests.  It works in the real world.

Those bellyaching about the cost of water in Toledo, those people that are raising the price are actually doing you a favor.  They will cause the supply — it may not be all that you want on any particular day, but they will cause the availability of supply to be around a lot longer than any government intervention to stop gouging.  That never works.