Mandeville, LA – Exclusive Transcript – The reason I bring that up is because Apple can get away with that.  They have engineers that are doing this for profit.  They have engineers whose very livelihoods and you could almost say lives are on the line if they don’t fix whatever that glitch was and get it right.  The people that are engineers at HealthCare.gov, they don’t have any vested interest in this.  It won’t matter to them whether it works or doesn’t work.  You can’t fire a government employee.  Hell, I don’t even know if you can fire a government contractor.  Check out today’s transcript for the rest…

Mike:  We have this story here today that the Health and Inhuman Disservices Director — or czar, whatever it is you call her — Sebelius was giving this demo of the HealthCare.gov site and it crashed.  I was thinking about this when I saw the story yesterday.  What occurred to me was that this actually — I had seen this movie before.  I had seen this movie in one of, if you’ll recall, the former CEO of Apple Computer, the now deceased Steve Jobs, was known for these keynote speeches he would give at these conferences called Macworld.  What would happen is Apple would roll out the latest and greatest edition of the iMac or introduce the iPod.  In 2006 they introduced the iPhone and all the other gadgetry that Apple has become famous for.  In one of those demonstrations, when Jobs was introducing one of the new machines or new version of the machines operating with a new software or a new version of the software, it crashed right in the middle of it as he was using his little pointer to show the audience at Macworld: You see how cool this is?  Now I’m going to scroll over here, and then it just crashed.

The reason I bring that up is because Apple can get away with that.  They have engineers that are doing this for profit.  They have engineers whose very livelihoods and you could almost say lives are on the line if they don’t fix whatever that glitch was and get it right.  The people that are engineers at HealthCare.gov, they don’t have any vested interest in this.  It won’t matter to them whether it works or doesn’t work.  You can’t fire a government employee.  Hell, I don’t even know if you can fire a government contractor.  If you follow me here, while Sebelius is giving this demonstration and the site crashes, the HealthCare.gov navigator says: Don’t worry about it; it happens every day.  Did you say every day?  Every day.  No big deal.  Don’t worry.

If it happens every day, there’s also a better than good chance that other things aren’t going to work as advertised every day, isn’t there?  Again, we’re going to find the exact same scenario.  Well, if it happened to the Aflac duck, if Aflac wanted to stay in business, they’d have to fix it, and they’d have to fix it so that the word got out that they did have a problem with that but they fixed it.  That doesn’t happen anymore.  They actually made it better than it was before it used to crash or before you used to not be able to get in touch with customer service or whatever the case may be.

When we have these things that happen in business and what is called the private sector, there is an instant and reliable remedy for the repair, isn’t there, class?  I feel like I’m teaching an economics class.  I think some people that are proponents of the Affordable Care Act and these other government-run monstrosities need to hear this.  Many of you already know this, so you don’t really need to hear it, but you need to have it reinforced.  I’m at your service.  When a company that’s trying to stay in business makes a mistake, there is a reliable remedy.  We can see this in any and every industry where there is commerce, can’t we?  Can we see this in any and every agency where government has inserted itself into commerce?  How about no?

This is why there is always going to be, if you want to look for it, something that’s going wrong with and probably will be institutionally or fundamentally wrong with, operations like Obamacare.  None of this should come as a surprise.  The depressing part about it is, unless it’s stopped, you’re going to be able to rely or we’re going to get used to or accustomed to relying on inefficiency, and relying on ineptitude.  That’s not a very positive thing to look forward to, is it?

As I was reading this story, that’s what occurred to me.  If you went to Best Buy to buy a widget or whatever it was you desired to purchase at Best Buy, let’s just say when you got up to the counter to check out, the little credit card gizmo didn’t work.  You swipe your card and it beams it through all sorts of cyberspace to see if you have the available balance.  Then it takes it out of your account.  You get a receipt, you sign it, and you’re out the door.  What happens when the machine goes down?  If you’re in Best Buy or Wal-Mart or wherever, most of those retailers have some kind of a backup system because they’ve had this problem before.  Some people might even have the old swipe machine.  Young Eric, are you old enough to remember credit card swipe machines?  Have you and young Evan ever even witnessed or seen a hand-used, non-digital credit card swipe machine where the clerk has to fill in the amount, calculate the tax on a calculator, then sum up the total and get you to sign it on paper?

Eric:  I have but only one time when I bought this car stuff from the gas station from some guy who was there without machines or a square or whatever else they use nowadays.  Yes, I have seen that.  They make the copy of your card with that carbon paper.

Mike:  That’s right.  So you bought something from Goober, the gas station attendant?

Eric:  He kind of blindsided me while I was filling up gas and I felt bad.  He was a young kid.  It was just stuff to clean my car.  I think it’s still sitting on top of my fridge.  I’ve never used it, $25 wasted.

Mike:  So we can’t get a testimonial on the product?

Eric:  I’m a sucker.  I just buy stuff because I feel bad.

Mike:  For you entrepreneurs that have those “start your own home business” products that you sell, if you’re around the DC / Maryland area, be looking for young Eric at gas stations, because he’s apparently very receptive to whatever it is you’re hawking that day.

Eric:  I order a pillow every time you do a live read.

Mike:  The point is that there’s a backup system or the retailer is prepared for this.  The HealthCare.gov people are never going to be prepared for this.  This is maddening.  To me, it’s maddening.  I don’t understand how tens upon tens of millions of people that benefit so mightily from the ingenuity of American business and American small business can reject that and embrace or even fake support for or enthusiasm for something like the Affordable Care Act and the website that goes along with it, and the navigators that are going to steer you through this.  The implication is that [mocking] “There used to be someone out there that was doing this but they weren’t doing it right, so the government came in and took it over.”  That’s not actually the story.  That’s not how the story goes.  Actually government was what was mucking it up.  As it continued to muck it up, it then swooped in, after it created its own crisis, it then swooped in and purports to fix it.

I watched an interview with CNN’s Erin Burnett and Senator Rand Paul of Kentucky.  If you don’t know who Erin Burnett is, folks, as I’m watching this interview — don’t think ill of me.  This is not a sexual thought.  As I’m watching this interview, I’m thinking: Erin, right about now you’d look really nice in a UCLA cheerleader’s uniform and some blue, gold, and white pom-poms.  She’s doing the Obamacare cheer, [mocking] “Come on, Senator Paul, you have to admit, give me an O, give me a B, give me an A, give me an M-A.  Put it together.  What does it spell?  Obama!”  I’m going to play it for you in just a minute.  I’m watching this as she’s cheerleading the Affordable Care Act and how wonderfully it’s working in Kentucky.  There is a pot of gold at the end of the rainbow because Senator Paul lets her finish her Obamacare cheer and then just delivers a smackdown.  As he delivers the smackdown, I’m screaming at my computer monitor: Yes!  That’s right!  Thank you, Senator Paul! 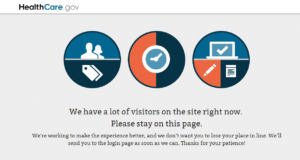