Mandeville, LA – The Parrot Press Corps has outdone itself this time, ambushing an unsuspecting Mitt Romney for uttering the words “Anglo-Saxon” in a positive manner. Romney pledged to ease the icy tension between Great Britain and the U.S. *(he might just want to jot down UK specs for DVD’s & CD’s) after Obama’s famous slight (a gift of DVD’s that won’t play on EU DVD players).  The Telegraph UK, breathlessly reported the possible tinge of “racial insensitivity” contained in the code words Gov. Romney was speaking. But Jefferson was still alive, and was reverenced as the Sage of Monticello.  The documents were forwarded to him for his advice. In October of 1823 he answered as follows :

“In remarks that may prompt accusations of racial insensitivity, one suggested that Mr Romney was better placed to understand the depth of ties between the two countries than Mr Obama, whose father was from Africa. 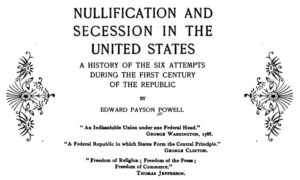 “We are part of an Anglo-Saxon heritage, and he feels that the special relationship is special,” the adviser said of Mr Romney, adding: “The White House didn’t fully appreciate the shared history we have”.

The advisers could not give detailed examples of how policy towards Britain would differ under Mr Romney. One conceded that on the European crisis: “I’m not sure what our policy response is.” “

I wonder if anyone in the media gaggle covering Romney knows the post Revolutionary War history of “Anglo-relations” twixt the USA and UK? Edward Payson Powell wrote glowingly of this arrangement, which dates back to 1823, in 1898.

Now occurred what was truly the greatest event of the nineteenth century. Canning refused to send delegates to Paris; and instead turned to the United States and said, “The hour has come when once more we must stand together.” To the legitimists he said: “Your opinion that all power is derived from Godappointed monarchs strikes at the fundamental principle of the British constitution. It is false. We will not deny that all power originates with the people.”

In other words Canning withdrew England from the alliance with despotic governments, and proposed a limited alliance with the United States. The Englishspeaking race in his judgment was once more called to fellowship and to co-operate in the name of liberty. The whole history of England had been violently wrenched to bring us into conflict. Let us once more become a united folk.

Our minister, Mr. Rush, hastened dispatches to Washington, containing Mr. Canning’s proposition. Monroe and his cabinet were astounded beyond measure. John Q. Adams, Secretary of State, rose to a full measure of the greatness of the occasion. Calhoun endorsed it with the fiery enthusiasm of his youth. But Jefferson was still alive, and was reverenced as the Sage of Monticello. The documents were forwarded to him for his advice. In October of 1823 he answered as follows : ” The question presented by the letters you have sent me is the most momentous which has been offered my contemplation since that of Independence. That made us a nation; this sets our compass. While Europe is laboring to become the domicile of despotism our endeavor should be to make our hemisphere that of freedom. One nation most of all can disturb us in this pursuit. She now offers to lead, aid, and accompany us. By acceding to her proposition we detach her from the band of despots, and bring her mighty weight into the scale of free government. With Great Britain withdrawn from the scale, and shifted into that of our two continents, all Europe combined would not undertake war.”

It was a glad hour for this great mind.

Indeed, do you think even the Romney Campaign will throw out this amazing little nugget of American history to the “straw grabbers” Click to view this chapter of “Nullification_and_Secession_In_United_States_Great_English_Treaty_1823“

I am now actively monitoring the comment sections on my site so feel free to post any questions or comments directed at me! Start by clicking the link at the bottom of this item and reading the 6 pages of the pdf file there-whammo! Is that history or what!?