Mandeville, LA – Exclusive Transcript – I’m watching this live on the Clinton News Network going: You’re there to talk about frogs and bats and stupid fish that people can find in great quantities where they’re allegedly endangered.  You’re not there to give policy prescriptions on Syria.  Yet it came out and was greeted and repeated and big news headlines as if Mrs. Clinton had issued an ultimatum to Vladimir Putin himself.  Check out today’s transcript for the rest…

Mike:  Mrs. Clinton, soon to be President Clinton, news for today, I believe she was at the White House for something about a global wildlife endangered species initiative, some silly conflagration of a bunch of tree-hugging, bark-licking, frog-coddling lunatics gathered to talk about doing something with endangered species.  I know it had something to do with wildlife.  She’s there to talk about Bigfoot or how big was that alligator those kids shot the other day, 750 pounds?  She was there to talk about alligators or whatever.  She just launches into this.

I’m watching this live on the Clinton News Network going: You’re there to talk about frogs and bats and stupid fish that people can find in great quantities where they’re allegedly endangered.  You’re not there to give policy prescriptions on Syria.  Yet it came out and was greeted and repeated and big news headlines as if Mrs. Clinton had issued an ultimatum to Vladimir Putin himself.  She basically threatened the Russians.  [mocking] “Let me tell you something, if you do this and you don’t follow through on it, you’re going to be held to account.”  Why Mrs. Clinton has any official capacity to say anything like this, and why it ought to be repeated as though it came from the Obama administration, your guess is as good as mine.  Here is at least part of the clip in question:

Hillary Clinton:  Now, if the regime immediately surrendered its stockpiles to international control, as was suggested by Secretary Kerry and the Russians, that would be an important step.  But this cannot be another excuse for delay or obstruction.

Mike:  She goes on to say if the Russians do not follow through on this, if they do not support the international community‘s desire for this, they will be held to account.  What do you mean the Russians will be held to account, and how are you going to hold them to account?  What, are you going to tell them they can’t have some kind of a white saber-toothed tiger in Siberia any longer and you’re coming to get it?  How are you going to hold them to account?  As I was watching this, I was thinking: Why does Mrs. Clinton’s opinion on this matter?  As a matter of fact, you can make the argument, as Michael Scheuer, former head of the CIA’s Bin Laden Unit has made on this show many times, it was Mrs. Clinton who should have been impeached during the entire Libyan debacle.  It was Mrs. Clinton who as leading the charge to get in there and get rid of Gaddafi.  It was Mrs. Clinton who okayed and signed off on whatever use of force or weapons it was.  It wasn’t Obama.  Therefore, it was Mrs. Clinton that should have borne the brunt of Congress’s disapprobation on her actions here.  Now she’s back to lecture the rest of us and what the Syrians ought to do here.  Says who?

Let me ask you a question.  If Laura Bush holds a press conference or desires to give an address after Obama, is she going to be afforded network airtime?  Is it going to be presented as though Mrs. Bush has a card to play here?  Or would it be: You can go find yourself a YouTube channel like Gary Johnson did during the presidential debates he wasn’t allowed into.  Go put yourself out on YouTube.  The press still has this affinity for Hillary.  The press still desperately wants to see — we’re going to follow up the first black president with the first female president, because what really matters is the diversity or distinction of the candidate.  Whether that distinction is by creed, race, or gender, it is the distinction itself that matters, not what they actually do.  How’s that working out for us in Mordor on the Potomac River these days? 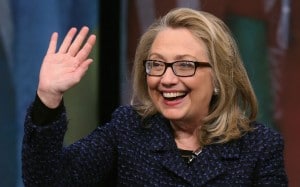