Yesterday started off innocent enough, until my friend Dan M sent me an email alerting me to the following:

I posted the story and my comments to Twitter, 24 hours a later, a gaggle of teenagers formed a Twitter lynch mob to reprimand me for “slut-shaming”. My original tweet said this, my apologies if anyone took that I was calling the girls “sluts”. 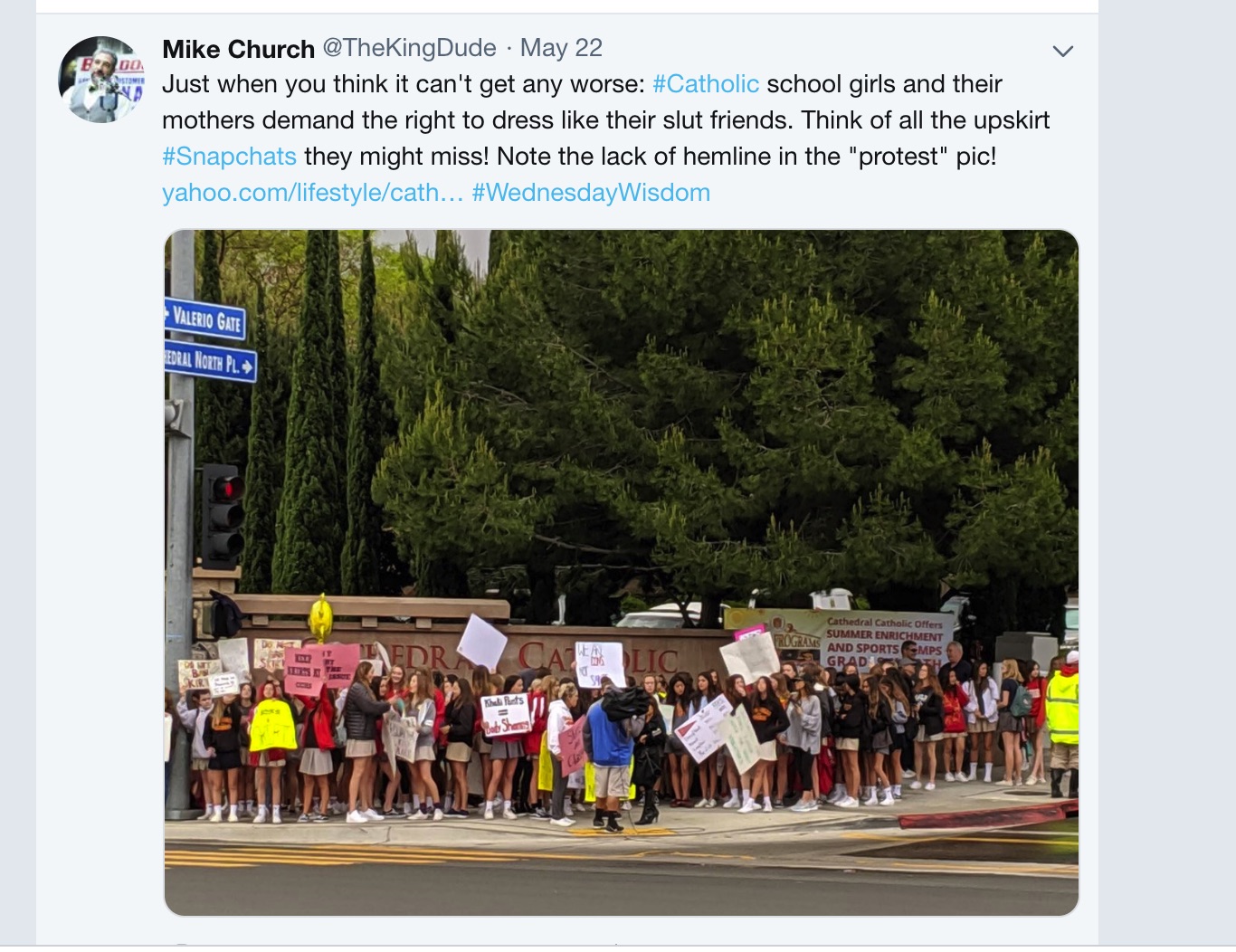 The Tweet should have said this: (full disclosure, in haste I composed the message, I’ve bolded the edited words as I should have posted them and deleted the original):

Just when you think it can’t get any worse: #Catholic school girls and their mothers demand the right to dress like their secular, slut friends. Think of all the upskirt #Snapchats the boys might miss! Note the lack of hemline in the “protest” pic! https://www.yahoo.com/lifestyle/catholic-teens-protest-high-school-skirt-ban-demand-their-old-uniforms-back-001109647.html … #WednesdayWisdom

Later today, my wife was alerted to the growing scandal and noted that some of the Cathedral Catholic girls had seen her comments on the story, the mini-skirt scorned, keyboarded into action! Here’s one of the message strings Mittus Chur got involved in over the micro-skirts at this #CATHOLIC school where the girls attend Mass daily!

3 of the Cathedral girls addressed me and demanded to know what business of this was mine, a virulent “slut-shamer”; I responded by pointing out that that infamous slut-shamer himself, Pope Pius XI was actually the source of my “shaming” and that Our Lady was the muse behind Pius’s “shaming” for the benefit of souls.

Women and girls who follow these standards and who look to Mary as their ideal and model will have no problem of modesty in dress. She who follows these standards will not be the occasion of sin nor a source of embarrassment or shame to others. – Pope Pius XI, 12 January, 1930

Listen To Mike’s Dismantling of This Immodest Travesty Here, From The Mike Church Show 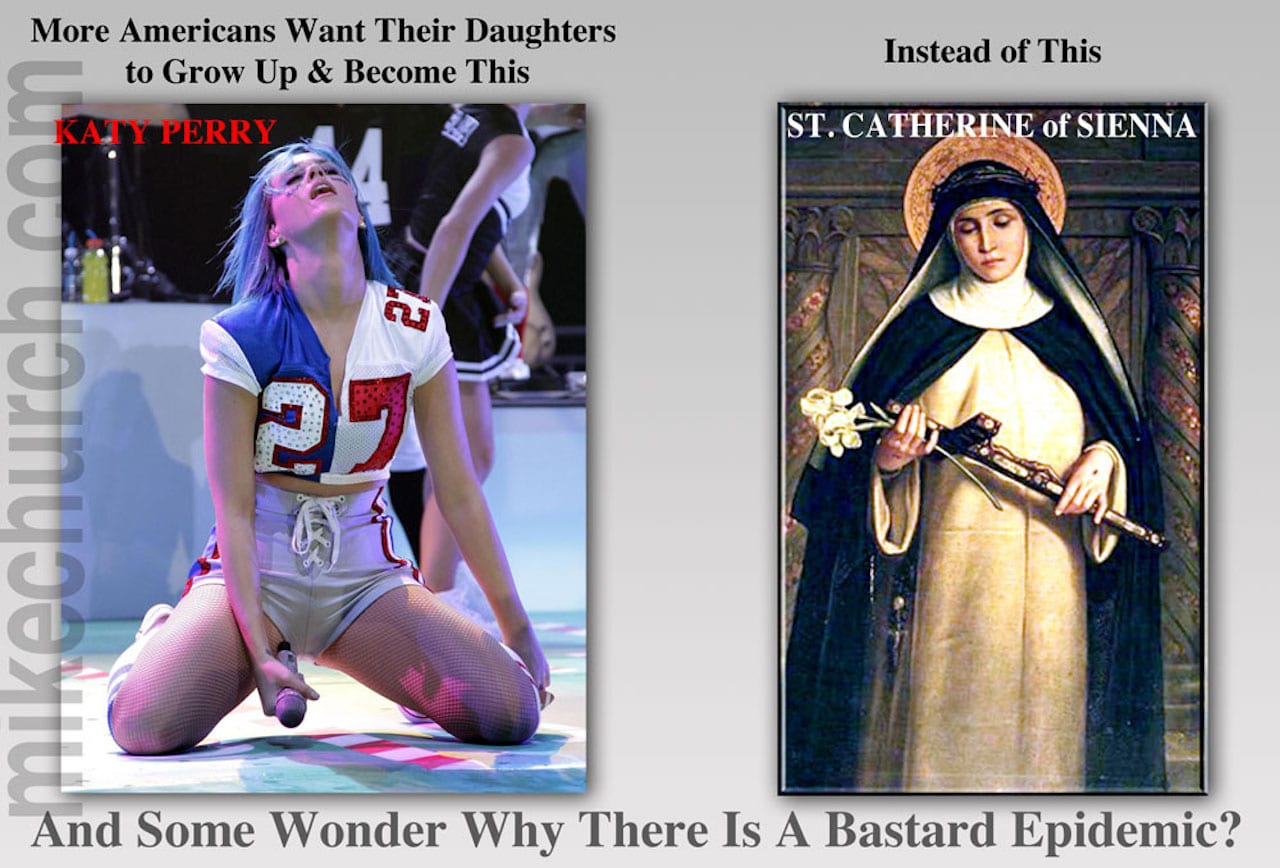 Nancy Pelosi is a cradle Catholic who remains, hideously, a “Catholic” despite her public promotion and defense of abortive baby killing, condemned by The Church and cited as a mortal sin to either perform, have performed, promote or defend. Call these girls the Little Pelosi Undressed Achievers.

Here is a photo of some of the girl’s skirts in question, in action if you will ON CAMPUS. Please note the vending of $100 worth of donations to pro-abort/infanticide Starbucks. Make your own judgement that even in the fallen world of Kim Kardashian, does this look appropriate to wear INTO MASS!? (they go to Mass daily).

Before you answer that, consider what His Holiness Pope Pius XI admonished ALL the faithful to teach and practice in regards to feminine, especially when it comes to appearing before the Blessed Sacrament at the Holy Sacrifice of The Mass.

If you follow the story on Facebook you will uncover an embarrassment of even more raunchy photographs of the girls AT SCHOOL. I will stand by the Tweet I posted in response to this, saluting the beleaguered principal of Cathedral Catholic High School, Kevin Calkins.

Stated another way, a parent or 60 @CCHSDONS wanted the secular, immodest world to know how their daughter’s were being #slutshamed by the school principal who, fairly read, has justifiable, grave concerns over the state of the souls in his charge. Give him a medal not a Cross.

There’s a slogan I’ve used for 3 years now on my radio show and it is ever relevant here. These poor, misguided, spiritually abandoned kids are screaming for Holy priests and reverent school masters to teach them modesty and thus Our Lady and Lord’s, perfect and beautiful purity and chastity (practiced imperfectly by we fallen sinners myself at the top of the “frequent offender” list).

The Demons are ascendent.

They’ve come for the children;

And they won’t take ‘no’ for an answer.

Here’s Pius XI’s dress code to emulate Our Lady, the Mediatrix of all Graces. Let us pray she mediates the Grace of modesty to all our girls and their mothers.

THE MARYLIKE STANDARDS FOR MODESTY IN DRESS

“A dress cannot be called decent which is cut deeper than two fingers breadth under the pit of the throat; which does not cover the arms at least to the elbows; and scarcely reaches a bit beyond the knees. Furthermore, dresses of transparent materials are improper.”

1. Marylike is modest without compromise, “like Mary,” Christ’s mother.

2. Marylike dresses have sleeves extending at least to the elbows; and skirts reaching below the knees.[N.B. Because of impossible market conditions quarter-length sleeves are temporarily tolerated with Ecclesiastical Approval, until Christian womanhood again turns to Mary as the model of modesty in dress.]

3. Marylike dress requires full coverage for the bodice, chest, shoulders and back; except for a cut-out about the neck not exceeding two inches below the neckline in front and in back and a corresponding two inches on the shoulders.

4. Marylike dresses do not admit as modest coverage transparent fabrics —laces, nets, organdy, nylons, etc. — unless sufficient backing is added. However, their moderate use as trimmings is acceptable.

5. Marylike dresses do not admit the use improper of flesh-colored fabrics.

6. Marylike dresses conceal rather than reveal the figure of the wearer; they do not unduly emphasize the parts of the body.

7. Marylike dresses provide full coverage — even after the jacket, the cape or the stole are removed.

8. Slacks or ‘jeans’ are not to be worn to church.Marylike fashions are designed to conceal as much of the body as possible rather than reveal it. This would automatically eliminate such fashions as tight fitting slacks or ‘jeans’, sweaters, shorts; shorts which do not reach down at least to the knees; sheer blouses and sleeveless dresses, etc.

These Marylike standards are a guide to instill a sense of modesty. Women and girls who follow these standards and who look to Mary as their ideal and model will have no problem of modesty in dress. She who follows these standards will not be the occasion of sin nor a source of embarrassment or shame to others. – Pope Pius XI, 12 January, 1930