Mandeville, LA – Exclusive Audio and Transcript – How do you get to a trillion dollars in defense spending?  Pull up a chair and I’ll tell you.  The Pentagon’s base budget is $530 billion.  To put it another way, a billion is a thousand million.  That’s $530,000 million, just to try to give it a little perspective.  So $530 billion is what the DOD allegedly spends, but that’s just the start of the story. Check out today’s Daily Clip and transcript for more…

Mike:  $1 trillion for defense, I was really shocked when I read this.  It had been about a year ago that I had seen a similar story posted and had not seen it updated until last night.  This is something that comes up often.  How much does the Department of Defense spend?  Here is the animating question, though.  Does anyone care?  [mocking] “We gotta have national defense.  We can’t have the terrorists coming over here and running us over.”  A trillion dollars, really?

The breakdown is even more shocking.  How do you get to a trillion dollars?  You keep hearing all of your favorite members of decepticonia — decepticons, of course, are the fakes and phonies and frauds that call themselves conservative but aren’t conserving very much these days.  What are they actually conserving?  What is the meaning of a conservative today?  Does it mean holding the line of what was spent last year, civil liberties that were eviscerated last year?  Can we double down on that?  Bet you can’t beat that.  What does the modern conservative conserve?  That’s why there are a lot more opportunists than there are conservatives, thus the term decepticon.

How do you get to a trillion dollars in defense spending?  Pull up a chair and I’ll tell you.  The Pentagon’s base budget is $530 billion.  To put it another way, a billion is a thousand million.  That’s $530,000 million, just to try to give it a little perspective.  So $530 billion is what the DOD allegedly spends, but that’s just the start of the story.

That amount does not include war funding, which in recent years has been well over $100 billion.  With U.S. troops being withdrawn from Iraq and troop levels falling in Afghanistan, you might think that war funding would be plummeting as well.  In fact, it will drop to a mere $88 billion in fiscal 2013.  By way of comparison, federal government will spend around $64 billion on education next year.  [Mike: They’re not actually spending it on education.  They’re spending it on people that pretend to be spending it on education.]  So you add in the war funding and now you’re at $618 billion.  We’re just getting started.

The military maintains an arsenal of nukes.  You might assume that we’ve already accounted for nukes in the $530 billion base budget.  You’d be wrong.  Funding for the nukes falls under the Department of Energy, so it’s a number you don’t usually hear, [Mike: But you can find it in the budget if you go through it with Obama’s fine-tonged fist pick.]  That number is $11.5 billion.  We’re not finished.  Add disposal of nuclear waste, which you have to add, that’s another line in there.  That’s $6.4 billion.  Now we’re at $636 billion and counting.

Mike:  “How about homeland security?  We’ve got to figure that in, too,” writes Chris Hellman and Mattea Kramer.  Homeland security next year is scheduled to spend $35.5 billion for basically spying on me and you.

There’s also funding for homeland security tucked away in just about every other federal agency as well.  Again, you have to look for it.  Think, for example, about programs to secure the food supply [Mike: Or whatever it is they call it.]  These are all funded by homeland security.  Add in another $13.5 billion and now we’re at $685 billion.

Then there’s the international affairs budget, another obscure corner of the federal budget that just happens to be jammed with national security funds.  For fiscal 2013, $8 billion in additional war funding for Iraq and Afghanistan is hidden away there.  There’s also $14 billion for what’s called “international security assistance” – that’s part of the weapons in training Washington offers foreign militaries around the world.  Plus there’s the measly $2 billion for “peacekeeping operations,” money U.S. taxpayers send overseas to help fund military operations handled by international organizations and our allies.  That brings the total now to $709 billion in defense spending.  We’re not finished.

We can’t forget the cost of caring for the veterans, including those wounded in recent wars.  That’s an important as well as hefty share of national security funding.  In 2013, veterans programs will cost the general government $138 billion.  That brings us to $847 billion, but we’re not finished.

Taxpayers also fund pensions and other retirement benefits for non-veteran military retirees, which costs $55 billion next year.  And then there are the retirement costs for civilians who worked at the DOD and now draw pensions and benefits.  Add in another $21 billion and we’re at $923 billion.  [Mike: I think we could use a little Austin Powers in here, don’t you, a little Dr. Evil in here?  What’s the total that we’re at now, Dr. Evil?  $923 billion.  We’re still not finished.]

Just one more thing to add in, a miscellaneous defense account that’s separate from the defense budget is called “defense-related activities,” and it’s got $8 billion in it.  Now we’ve got a grand total of $931 billion.  This will turn out to be a conservative figure.  We won’t spend less than that, but among other things, it doesn’t include the interest we’re paying on the money we borrowed to fund past military operations; nor does it include portions of NASA that are dedicated to national security.  And we don’t know if this number captures the entire intelligence budget or not, because they won’t let us see the books.

For now, however, the whopping $931 billion dollars for 2013 will have to do.  [Mike: Let’s put this in perspective.  This is just defense spending.  All you hawks out there, this is what your defense costs you.]  If the national security budget were its own economy, it would be the 19th largest in the world, roughly the size of Australia.  Meanwhile, the country with the next largest military budget, China, spends a pittance by comparison.  The most recent estimate puts China’s military funding at around $136 billion.

Think of it this way: National security accounts for one quarter of every dollar the federal government is projected to spend in 2013.  And if you pull trust funds for programs like Social Security out of the equation, that figure rises to more than one third of every dollar in the projected 2013 budget.

Mike:  I’m going to add my own caveats in here, ladies and gentlemen, if you’ll humor me for just a moment.  First caveat is the general government, if it is to continue to exist, and the reason it was brought into existence, the reason the federalists, or one of the purposes the federalists sold it as is we’ve got to provide for common defense.  We just had this massive war with Great Britain, the greatest military power on earth.  The states are all saddled with debt.  We made funding requisitions to the states.  Some of them refused to pay them.  There’s no way that we couldn’t pay our soldiers and what have you.  It’s no way to fund a war.  It’s no way to run a war.  We have to have some sort of organizational system where we can tax and raise money, should we need it, for another war.  Okay, fine.  I’ll go along with you on that.  There is historical precedent to this.

Ladies and gentlemen, you can look these figures up.  Please, fact check me if you don’t believe me.  Find the historical archives of the general government’s activities and spending.  You can bear this out.  From 1789 to 1931, on average, the general government, that is everything that goes under the umbrella of the Constitution, spent about three percent of gross domestic product.  GDP is hard to estimate going back that far.  No one really cared about it.  We weren’t counting it.  Income taxes and corporate taxes weren’t being filed.  Companies, as is their right under the Constitution, weren’t compelled or forced to fork over every solitary nickel that they earned.  Up until the 1910’s or so, until the implementation of the income tax, the records are just based on general receipts.  No one disputes that they are accurate estimates, if there is such a thing.  You have three percent of GDP spent total from 1789 to 1931.

Let’s just say I were to agree with you that two-thirds of what the country spends from the general government side of things ought to be in defense and we got back to the historical average of three percent.  That would mean that two percent of GDP would be spent on defense.  Mr. Gruss, what is the estimated GDP for this year?  Is it $15 trillion?  Is that about right?

AG:  I believe it’s right around that figure, yeah.

Mike:  we can just round it off at $15 trillion.  What is two percent of 15 trillion?  If we want to put this in historical context, and if you want to lecture me or anyone else about getting back to the Constitution and how conservative conservative war hawks are or decepticons war hawks are, put this in your pipe and smoke it.  I’ll give you the number.  That would be $300 billion per year. 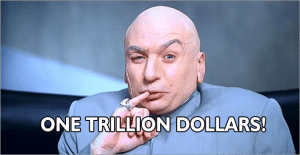