The Gentleman’s Code of Conduct 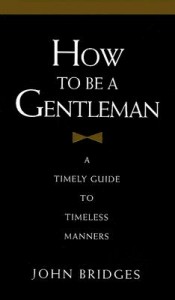 Mandeville, LA – Exclusive Transcript – “Tell us a little bit about the Timely Guide to Timeless Manners.  This is one of the questions I get often: Times have changed, Mike.  You need to get with the times.  Manners have changed.  That’s what my stepson tells me.  I instructed him: Good manners never go out of style.  When we let them go out of style, shame on us.”  Check out today’s transcript for the rest…

Mike:  John Bridges, good morning to you, sir.  How are you?

John Bridges:  I am well, Mike.  A good morning to you from Nashville, Tennessee, where I am.

Mike:  Tell us a little bit about the Timely Guide to Timeless Manners.  This is one of the questions I get often: Times have changed, Mike.  You need to get with the times.  Manners have changed.  That’s what my stepson tells me.  I instructed him: Good manners never go out of style.  When we let them go out of style, shame on us.

Bridges:  Shame on you, shame on me, shame on your stepson, shame on anybody.  Basic manners really never change.  The way we deal with the world around us does have to change.  Mike, quite frankly, there are so many more ways out there to misbehave now than there were when I wrote the first of these books, which is going on 20 years ago now.  We just look at the proliferation of cell phones and iPads and all these opportunities to misbehave that you simply did not have years ago.  You have to try to keep up, not only with the technology, but you have to keep up with trying to deal with all the opportunities for awfulness that technology brings into our lives.  It’s just astounding.  It’s great to be able to communicate with people in new and different ways, but I don’t know whether it’s so great to be able to communicate with people in another city while you’re sitting at dinner, supposedly with someone having an intimate dinner and you’re checking your emails and tweeting.  Keeping up with it, that’s why it has to be timely.  That’s why you have to keep on top of it.  If you’re doing a history of it, I hope you’re going to bring it as close as you can up to where we are right now.

Mike:  I have introduced the audience about two years ago, upon my stumbling upon Letters to His Son from the Earl of Chesterfield.

Bridges:  Honestly, those letters are what inspired me to write this book.

Mike:  Tell me, how do we bring the Earl of Chesterfield into the iPhone era?  One of the things Chesterfield tells — he never calls him anything other than boy.  One of the things he tells him — and I actually took this to heart and had read these particular letters over and over again.  One of the things he instructs him on is: If you go to a party, here are some certain ground rules that you should abide and obey.  You just mentioned about checking the email.  I would think that the Earl of Stanhope would not have been a fan of even consulting your watch if you had one that was wound up and in your pocket.

Bridges:  I would agree with you on that.  Of course, it was a lot more trouble to check your watch back then than it is to flip out the iPhone and start checking your messages from somebody else while you’re 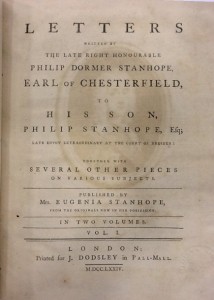 talking to another person.  There are all these sorts of things that people think nobody is seeing them doing.  For some reason, all this technology, you’re using it but somehow it’s invisible to the rest of the world.  People aren’t seeing you do this.  One of my favorite Chesterfield letters is, he wrote to his son in terms of being careful what you’re doing because you’re never sure who’s watching.  He said the first time he ever met the poet Alexander Pope, what was Mr. Pope doing but picking his nose.  You never know who’s watching.  You never know what people are doing.

An egregious example that’s fresh in my mind, I was at a wedding on Saturday morning, a wedding in the Episcopal cathedral here in Nashville, where people certainly ought to have known how to behave themselves.  It was alarming to me.  When the wedding party starts up the aisle at the processional, the cell phones come out, the cameras come out.  People literally stepped into the aisle to take pictures of the wedding party coming down the aisle.  Leaving, they did the same thing.  One woman was standing up, in the middle of the service, standing up like she was at a rock concert with her camera up in the air taking pictures of this thing.

Where does it come from?  I know where it comes from.  It comes from thinking that you’re more important at that moment than anybody else.  That’s the kind of thing that you have to figure out how to deal with.  Here it is so we’ve got to figure out how to deal with it and deal with it in a way that allows us to interact with other people in a human and humane sort of way.  It can really be alarming.  I cannot imagine how Chesterfield, if he had been within arm’s length of his son, how he wouldn’t have slapped that cell phone out of his hand.

Mike:  A concise, contemporary guide to personal correspondence.  This is a peeve of mine.  It’s one of those things where people will write me, because I’m a radio host and I have opinions.  They’ll write me and be very vulgar and yell at me.  I don’t even know these people from Adam.  The first thing I’ll respond back is: Number one, please use proper terminology.  Number two, I don’t know you.  Why are you swearing at me?  Number three, there can always be the formality of Dear Mike or Dear Sir.

Bridges:  Even in email, what’s wrong with “Dear Mike” at the start of an email, or even just “Mike” and then signing off in some sort of way?  People say: I’m just texting.  I don’t want to use my fingers that much.  What are your fingers for?  That simple gentlemanliness, that simple humanity, that simple cordiality, that simple respect for another person to use a name at the start and to close off.  You can imagine, with me having been in the newspaper world for 20 years, and a lot of what I did over the years was writing music criticism.  You can imagine here in Nashville how you could stir stuff up with that and the kind of responses you would get.  Of course, on our end of things, my end of things, your end of things, a lot of it requires, from our end, taking a big, deep breath and letting people vent, and not getting into it with them any more than you possibly can, trying to consider the source as much as you can.  If people are going to use language like that, if they’re going to get stirred up, you do your own best to be a gentleman about it and not stir the pot back with them and just encourage that beastly behavior on their part.  It is amazing the things that people feel they can and may say to you.  Of course, they hear you talk on the radio every morning.  Of course they think they know you.  Why shouldn’t they be able to say to you whatever they think they want to say to you?  I hate to tell you, my friend, but that comes with the turf.

Bridges:  Trying to help people learn to behave better, you have the opportunity to do that, too, being in the job that you’re in.

Mike:  Finally, and this is one of the other unspoken rules, or used to be an unspoken rule, and unfortunately it’s not any longer.  Just through pure lack of application, if I don’t remind myself, it’s not an instinctive thing for me to remember to, in all instances, apply those manners that gentlemen are supposed to have and are supposed to exhibit towards lady at a table.  That’s another peeve.  Talk about that for just a minute and why that shouldn’t go out of style.

Bridges:  Ladies or anybody, but the traditional thing is paying particular attention to the women in your life, ladies around you.  The whole thing of opening the door, pulling out the chair to help a lady sit down, pulling out a chair when she’s standing up.  Those kinds of things, it’s not because we believe women to be weaker vessels and poor, fragile creatures.  Lots of times women have a lot more stuff with them and a lot more stuff going on with them than men do.  What’s wrong with helping a person through something that might be an awkward situation?  What in the world could be wrong with that?  What’s wrong with being thoughtful of another person?  Being able to make something like cordial conversation, to ask questions of the other person rather than just sitting there and holding forth yourself.  Paying attention to somebody else really never hurt.  Those are just old traditional things.  Letting the lady order first, that kind of stuff, why would you let her go first?  Of course, traditionally you’re paying for the meal and she’s the guest and all that.  It comes down to this for me, simply, still in this world somebody’s got to go first.  Why shouldn’t it be her?  Why not?  Why not continue that sort of tradition?  Why not let her walk first through the room, that kind of thing?

What you’re saying is the thing about reminding yourself.  That’s the important thing.  It means you’re paying attention.

“FOLKS, a message from Mike – The Project 76 features, Church Doctrine videos and everything else on this site are supported by YOU. We have over 70, of my personally designed, written, produced and directed products for sale in the Founders Tradin’ Post, 24/7,  here. You can also support our efforts with a Founders Pass Membership granting total access to years of My work for just .17 cents per day. Thanks for 17 years of mike church.com!” – Mike

I bet you weren’t, because you clearly weren’t if you’re coming down on me because of my behavior.  I’m trying.  It’s that kind of thing.  What you just said is, to me, the essential, the idea of having it in mind, trying to be thoughtful of other people, trying to monitor your behavior, and trying to remember that there are other people out there in the world.  The world is not really all about you and it’s not all about me.  It’s about the whole mass of people that we run into every day.  It’s everybody who’s standing in line in front of you in the grocery store, all of that.