Mandeville, LA – Mike Church‘s daily Pile of Prep, bringing you the day to day activity of the Constitution AND the Declaration of Independence and how they were framed in the summers of 1776 and then 1787.  Read along with Mike’s historical viewpoint to help make sense of it all plus other [r]epublican stories used to perform the Mike Church Show on Sirius/XM Patriot channel 125. “The past is a great storehouse of wisdom; as Burke said, “the individual is foolish, but the species is wise.” The conservative believes that we need to guide ourselves by the moral traditions, the social experience, and the whole complex body of knowledge bequeathed to us by our ancestors. The conservative appeals beyond the rash opinion of the hour to what Chesterton called “the democracy of the dead”—that is, the considered opinions of the wise men and women who died before our time, the experience of the race. The conservative, in short, knows he was not born yesterday.” – Russell Kirk, What Is Conservatism

While foreign policy conferences are going on, attempting to chart a new course “for our nation” let’s reflect on the sobering fact that a foreign policy that claims to represent 311 millions of people is a foreign policy of either A. a dictatorship or B. a lethal “jobs program” that employs the war industry while claiming it’s for “humanitarian” causes. The smart money would be discussing how a Northeastern confederacy could best commence trade with Canada and Eastern Europe while a South eastern Confederacy discussed Central and South America – MC

Conor Freidersdorf makes the point that is the NSA is really gathering ALL that data on “bad actors” we are told they are then why didn’t they warn about the growing ISIS threat in Iraq?

Patrick J Buchanan: Is the Ayatollah really worse than “Uncle Joe” Stalin? Why is the U.S. fighting the people who are fighting Al Queda? Remember, the guys who commissioned the suicide bombers of 9-11?

What is conservatism? The sage Russell Kirk answers that query with 10 points we would be wise to study and emulate

Professor Andrew Bacevich (Interviewed by me here) reminds readers that the war cries of DeceptiCON pooobah Robert Kagan have no credibility and no authority. Kagan was a mastermind of the 2003 Iraq Invasion and still believes “American/world hegemony” is just a few thousand casualties away

“He is to be supported in extravagant magnificence…and accorded the powers of a King” – Patrick Henry predicting what the Presidency would become. “Executive action to ban fed contractors from discriminating against LGBT workers is good for America & for business.” – President’s troll, Valerie Jarret announcing King Obama’s intention

A “Wave of humanity” blankets the southern border of the U.S. and is probably going to get worse if the plug is not pulled on this all out invasion force from Central/South America is not halted

“We like war, we’re a war like people.” Obama sends 275 U.S. troop to “protect” U.S. embassy in Iraq in the move likely to be remembered as the Iraqi Gulf of Tonkin. As Bruce Fein notes on today’s show, there is no constitutional justification for this whatever, where’s Boehner to demand Obama stop THIS tyranny?

Nomocracy: Is Secession a Right? [Yes, it is-emphasis mine] “Further, the Declaration of Independence need not be read to endorse only a limited right of secession. The passage that refers to light and transient causes forms part of a discussion of when change of government is prudent, but the issue that concerns us here is not prudence, but rights.”

Judges get into the bad habit of issuing “no knock” warrants to nail meth makers doing $50 drug deals. Cops get into the worse habit of throwing flash-bang grenades in the houses without warning. A baby in Georgia is fighting for its life right now after getting a flash-bang thrown into it’s crib

Impeachment anyone? As I have detailed on the radio show and dozens of times, the latest with Kevin Gutzman, The Obama power grabs are unprecedented and worthy of impeachment. WaPo’s Karen Tumulty addresses this with today’s guest Bruce Fein

ABBEVILLE: Brion McClanhan’s wonderful essay on the life and times of Patrick Henry as the real federalist beau ideal, not the derisive “anti-federalist” title his jealous enemies tried to hang on his legacy. 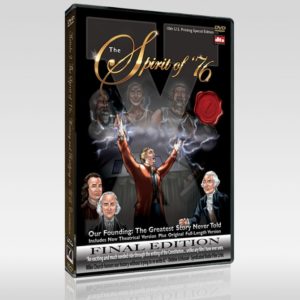 The RAREST of Rare, 76 copies of the TENTH printing of SPirit of ’76, available NOW

NEW – If you wonder why I refuse to deviate from the opposition to our bellicose foreign policy and all that it conjures up, read this most important essay about the effects of “War, Power and Supremacy” Here’s an excerpt. “Except for the inhabitants of certain former states of the Confederacy, particu- larly Virginia, Tennessee, and Georgia, Americans have no experience at the other end of the process of radicalization. They have not suffered the fate of having been demonized, followed by savage in- vasion where no quarter is given, commu- nities laid waste—and that succeeded by a period of occupation replete with the usual antics of unscrupulous exploita- tion and further brutalizing acts. Lacking such a historical memory, finding it easy to dismiss the Southern experience, and, furthermore, being inclined by nature and education to discount history in general, Americans lack both the internalized ex- perience of the vanquished and the incli- nation to suspect a political establish- ment that promotes such barbarism as a new principle of global supremacy.”

Are agrarian [r]epublicans making a comeback? Dr Allan C Carlson seems to think so, here are some of his RARE lectures to listen to and watch

Well whaddayouknow, the NSA programs are carried out under an Executive Order signed by President Reagan in 1981 Donald Livingston explains the path that Lincoln took to subjugate the Southern States to the Northern with all the facts of the story in place. Take an afternoon and enjoy…

Our Federal Government” by Abel Upshur is an 1833 demolition of Justice Joseph Story’s fabricated history of the United States and her Constitution. WARNING: Reading this will increase your resolve to secede!

The  counter-argument presented by John taylor of Caroline AFTER the government’s lawyer, Wickham, presented his case for the tax. I did not include this in the Carriage Tax Pamphlet but have found it online. Begin reading on pg 423. [/private]

John Stossel makes great points on why the U.S. foreign policy machine has been wrong about Iraq, then Afghanistan and will be seriously wrong if it succeeds in the same tactic/strategy in Iran

Kevin Williamson kneels before the altar of capitalism and finds it refreshinhg and saving while Catholicism is found wanting and not with the times. Of course, Catholics readily admit the modern Church’s problems are many but that is not the fault of the Liturgy, it is in spite of it

LATIN PHRASE OF THE DAY: “Beatus vir qui timet Dominum, in mandates emus volet nimis” – Happy is the man who fears the Lord, who is all the more willing to follow his commands