Mandeville, LA – Exclusive Transcript – Here’s another article that I found, stumbled across yesterday: “Preserve Digital Letters.”  This is written by a cat named Fady Zaki at something attached  to Reason Magazine.  This guy lives in New Zealand.  This guy makes a very interesting observation. This goes out to all you 20-somethings and mid-30-somethings.  When was the last time you picked up an ink pen, sat down with paper in front of you, and composed a formal letter to anyone, paper, pen, folded it up, put it in an envelope, self-addressed it and mailed it? Check out today’s transcript for more…

Mike:  Here’s another article that I found, stumbled across yesterday: “Preserve Digital Letters.”  This is written by a cat named Fady Zaki at something attached  to Reason Magazine.  This guy lives in New Zealand.  This guy makes a very interesting observation.  Let me ask you and young Eric a question.  This goes out to all you 20-somethings and mid-30-somethings.  When was the last time you picked up an ink pen, sat down with paper in front of you, and composed a formal letter to anyone, paper, pen, folded it up, put it in an envelope, self-addressed it and mailed it?

Mike:  Do I want to know the contents of this?  Eric, you didn’t request a stinky jersey, did you, a jersey or workout shirt that’s been worn?  He wrote a letter to Ray Lewis.  Some historian is going to discover that letter someday and say, “Look, there was a gentleman by the name of Lewis, the Earl of Baltimore.  It was correspondence between one Eric White, the Duke of Lower Maryland, and Ray Lewis, the Earl of Baltimore.”  He wrote a letter to Ray Lewis.  That’s awesome.  Did he use a pen?

AG:  I’m concerned that he cut letters out of a magazine and it’s a creepy letter, but we’ll see.

Mike:  Were there any Elmer’s glue sticks involved in this process?

Mike:  Ask him if any Elmer’s glue sticks were harmed in the making of his letter to Ray Lewis.

AG:  He declines that.  It’s an actual letter.

Mike:  This gentleman writes about how sometime around the 13th Century or so, people started writing letters, correspondence to one another, regularly.  The letters have been preserved.  He goes through the history of this.  To consider civilization, I think, is it consider what has made civilization and humanity.  Arts and letters certainly have differentiated us from animals.  I think that we stop writing, stop being men and women of arts and letters, at our peril.  I don’t believe the digital world gives us much appreciation for any form of fine art.  We are attracted usually to vulgar art.  How can you make fun of someone?  How can you parody something?  How can you satirize something?  How can you put Obama in a compromising position in Photoshop?  What can you do with Photoshop to screw with things?

A few people are busy painting the beautiful today.  No one is sitting around parks anymore with sets of tempera paint painting ducks meandering across a pond.  We’re all hanging out, learning how to digitally manipulate current photographs to turn them into vulgar representations of what they formally were, regardless of who it is.  I probably have been vulgarly represented.  That’s a destructive thing.  That is not something that endears itself to the elevation of good things in life, is the point.  The immediate and instant gratification of digital transmission, whether it’s text, email, or whatever form it comes in, people don’t preserve many of their emails.  I have some of the better ones I’ve received from some of you in case I ever decide to write a memoir, but I’m a rare bird, rara avis, as they say in Latin.  Here’s what he wrote in part:

The ephemeral nature of text-based digital communication should be regarded as an important cultural issue.  We have always been fascinated by how people used to live in the past.  We dig up artifacts, decipher dead languages… [Mike: Just think of the setup for the Ridley Scott movie, I think you saw it, AG, Prometheus.  What did they use to find the path to the star, to LV-426?  Cave paintings, right?  What if the cavemen had iPhones and weren’t able to power them back up?  What would you do?]  We dig up artifacts, decipher dead languages, study ancient texts and even exhume dead bodies in order to piece together pictures of our ancestors’ lives.  But we treat our old electronic letters (i.e. emails) like a pesky nuisance, so much so that it’s not considered a tragedy if one loses access to them or if they were permanently deleted by the email provider.  After all, they’re seen as disposable waste, like many other products in our throw-away society.

But over time, emails could become a historical source that can be used in the far future to help reconstruct a particular moment in our human story.  They’re as valuable as papyrus manuscripts and historical letters on display in libraries and museums today.  Emails – like the letters of the past – record our hopes, dreams and fears, our struggles, successes and failures.  The reflect important personal events, as well as global events and their impact on our daily lives.  Our electronic letters might contain acronyms like OMG instead of those found in old Latin letters such as D.V. (Deo Volente, “as God willing”) … [Mike: Here are some other old Latin phrases: e.g., exempli gratia, i.e., id est.  One means for the sake of an example, the other “as in.”  There is another one, viz.  How many of you have used the term viz in a sentence lately?  That is lately for “that is to say.”]  In fact, there are various reasons for why they should be saved.  For instance, some linguists speculate that within 100 years or so, our present era might be regarded as one in which the English language started to evolve drastically due to the influence of the Internet.

Mike:  I have a question.  Is it evolving in a positive or a negative manner?  Is there something to be said about classical language structure?  Then he goes on to beg people to start saving their emails.  I have another idea.  I’ve written to some friends of mine, who have yet to respond, that in the least what men and women of good character and virtue, the least of which we can do is reacquaint yourself with how you are actually supposed to write a letter instead of firing off a one-paragraph email.  You might save some of your correspondence and put it all together as in “Dear John, Signed blank.”  At least then you have the formality of a letter, maybe with a date attached.  If it’s an important email, print a hard copy of it.  Stick it in a file folder.  Your kids may want to read it someday.  It’s an interesting concept.  I think letter writing is one of those things that we’ve lost.

I was researching a video that I do for the local TV station here, Channel 26 in New Orleans the other day.  One of the points I was trying to make was that formal college education is for the few not the many.  Tens of trillions of dollars are being squandered in this endeavor and they are not going to pay those young people back that have been rooked by an establishment that has gotten the favor of the government to basically have everyone in the country in unison saying, “Go to college, young man.”  Not everyone should go to college. 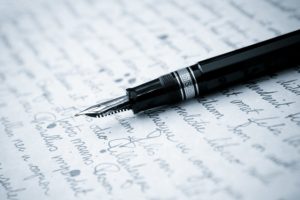