Mandeville, LA – Exclusive Transcript – Mark Sanford hasn’t done anything that Ted Kennedy didn’t do.  As a matter of fact, Mark Sanford is a wannabe when it comes to the peccadillos of the Kennedy clan.  This idea here that you can’t be some manner of an illicit human being and hold a job or position in our magisterial federal government, I think, is ridiculous.  Check out today’s transcript for the rest…

Mike:  Big election in South Carolina today between Stephen Colbert’s sister and Mark Sanford, former governor of South Carolina.  AG, you were telling me you think Sanford wins by a point or two?

AG:  I think the latest PPP poll shows that Sanford is up by one point, which would be a change when about two weeks ago Colbert-Busch, who Sanford is running against, that she was up about nine points.  That has seemingly undergone a ten-point shift over the past two weeks.  They say that is due to Sanford being able to change the debate from discussion of his personal life, which is a disaster, to focusing on Obamacare.

Mike:  I thought about this after our last conversation about this, about Sanford’s personal life being a disaster.  Mark Sanford hasn’t done anything that Ted Kennedy didn’t do.  As a matter of fact, Mark Sanford is a wannabe when it comes to the peccadillos of the Kennedy clan.  This idea here that you can’t be some manner of an illicit human being and hold a job or position in our magisterial federal government, I think, is ridiculous.  I do agree with you that the GOP is not going to touch this guy.  They can’t do it publicly anyway.

AG:  I see a difference, though, because the Republican Party has for so long stood on a moral high ground and tried to press their morality on the public.  Having an elected official who lied to constituents, initially used constituent funds to fund a trip to Argentina before being caught and having to admit it, having to change the funding, I think it’s just completely hypocritical.  He’s just a mess and South Carolina is making a huge mistake.  Some of the other stories say that he’s going to get no support from the GOP in the House if he were to win election and will be out of office very, very quickly since no one wants to touch him.  They have a full election next year.  The South Carolina GOP is steadily trying to figure out who should be the Republican nominee, because it won’t be Sanford.

Mike:  I’m still amazed by all this.  These are not the actions of what I would call conservative people.  What I would say and what I have said publicly, and I’ll say it again.  If Mark Sanford, man, human, American, South Carolinian, if Mark Sanford has gone before his — I don’t know what his religion is, don’t even know if he has one.  Let’s just pretend for a moment that he does.  If Sanford has asked his lord and savior to forgive him, his God to forgive him, and is trying to live a better life and is contrite and has asked for forgiveness in the public square, at least  he’s asked for forgiveness.  At least he’s made an act of contrition.  I don’t see why people just can’t say: Okay, Mark, we will forgive you.  We will all practice tender mercies and the spirit of forgiveness.  We’re going to keep our eye on you.  The first instance that we get an inkling you’re heading off to Argentina or maybe this time it’ll be the Oregon Trail or whatever, then you don’t get any more chances to be forgiven.  Before you say anything, I’m going to give you one more example.  This is not a politician.  Have you seen any of the Iron Man movies?

Mike:  Are you aware of what Robert Downey, Jr. went through as a young man?

AG:  The drug and alcohol stuff?

Mike:  Wait a minute.  I understand that.  I’m talking about contrition here.  Robert Downey, Jr., every six months, was being checked into — if someone wasn’t checking him in, he was checking himself into Betty Ford Clinic.  He was being fired from the jobs he held, the acting gigs he held on TV shows and TV series on Fox, if I recall correctly.  He was being thrown off the sets of movies because of his behavior and what have you.  Somewhere along the way, Robert Downey, Jr. got right.  He always was a mega talent but he had to get right.  He had to stop, obviously, the abuses he was causing not only himself pain but those who trusted him with great authority.  When you’re paid as an actor in the kind of sums that these people are paid, there is some responsibility there.  They are expecting a return on their investment.  I only bring the example up because Iron Man 3 is big at the box office this week.  It’s a great example of a man who, as a young man, had a myriad of problems, got his life straight, and now by all accounts is a respectable member of society.  I don’t see why Downey, Jr.’s past, other than me bringing it up to make an analogy, why that should prevent him from being the star of the next Iron Man movie, Iron Man 4.  I’m just saying I am willing to forgive Mark Sanford again.

AG:  I don’t have an issue with the forgiveness.  I agree with you on that.  I think with an elected politician, you’re going past the free market choice of buying a movie ticket.  When Sanford is going to be voting on issues of morality and whether to make that morality issue public policy that affects people’s private lives, I don’t think Sanford has a leg to stand on in terms of any moral issues, I just don’t.

Mike:  So you’re not buying the forgiveness.  Let me try one more.

Mike:  Have you ever heard of St. Augustin?

AG:  But Mike, isn’t there a difference between forgiving him and giving him the power to impress upon others his view of morality?

Mike:  First of all, I don’t know what acts of Congress are going to be impressing views of morality.

Mike:  So he can’t have an opinion on gay marriage?

AG:  He completely disrespected what marriage is.

Mike:  He’s giving it another shot.

AG:  Right, but he completely.

AG:  Absolutely.  I would make the argument that those people wouldn’t have a leg to stand on in terms of telling others what marriage is.

Mike:  You’re basing that on past actions.  That’s why I’m going to bring up St. Augustin now.  At a point in his life, Augustin was a warmongering conqueror.  Someone had to forgive Augustin for Augustin to come to write a book called Confessions and to become one of the fathers of the Catholic Church.  Somebody had to forgive him.  We know who that someone was.   He was Jesus Christ and Jesus’s father, of course.  Using your theory, I should just ignore what Augustin did.  I should ignore the teachings of Augustin.

AG:  If Augustin condemned those people that had the same viewpoint as he did earlier on in his life, I would have to question that.  I think it’s hypocritical for Sanford to have any critical view of what traditional marriage should be.  He was in an affair when he was married.  I don’t buy him being able to judge what other people view marriage as because he was completely disrespectful to the sacrament of marriage.  That’s the issue.  I’m not familiar with St. Augustin, so I don’t know the backstory.  If he was, as you’re saying, a conqueror, that sort of thing, but realized later in life that that was the wrong mindset at the time, I would still find it difficult for him to be overtly critical of someone that had the same mindset of him earlier in their life.  He could say he’s changed, but to make any kind of public policy that forces people to live how he sees fit after being of the same mindset earlier in life, I think, is very difficult.

Mike:  When you’ve been chosen by Jesus Cristo himself, I think you have a pretty good endorsement there, St. Augustin of Hippo.  I don’t have the time to get into the entire biography of St. Augustin, but I probably missed a point or two and will have people shouting at me on email any moment now or on the Twitter.  It’s a good debate.

AG:  Would it be fair for St. Augustin to condemn people who had the same mindset as he did earlier in his life?  I find that very judgmental in a way that — would an earlier self understand?

Mike:  Augustin didn’t convert to Christianity until he was about 30 or so.  I’ll have to look up the rest of his history.  I know that Augustin would not be a St. Augustin as he lived as a young man until he converted, I can tell you that. 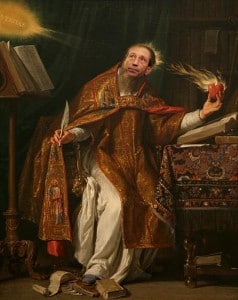